Food delivery company tops FT 1000 list, though it has to steer skilfully

Had its driver assessment system been operational when Deliveroo’s co-founder and chief executive delivered its first ever order, he would not have scored highly.

William Shu, a former banker, motor-scooted a calzone from an Italian restaurant through London streets to a friend, only to eat the folded pizza himself — as he was hungry. “She wasn’t that happy with me but she became a regular customer,” says the 38-year-old American.

Deliveroo, which he says he started simply “to solve a personal problem”, has topped this year’s FT 1000 list of Europe’s fastest growing companies. Between 2013, when Mr Shu and co-founder Greg Orlowski started the enterprise, and 2016, its revenues grew by a staggering compound annual growth rate of 924 per cent.

Timing was an important factor: in its 11 months of trading in 2013 the company made it just beyond the minimum €100,000 turnover in that year to merit inclusion in the ranking.

Deliveroo’s platform provides 10,000 UK restaurants with delivery drivers on a combination of bicycles, scooters and cars. But the drivers are not employees: the company pays them only for the time they are logged in. Customers, who order via Deliveroo’s app or website and pay a £2.50 fee, can rate their delivery. 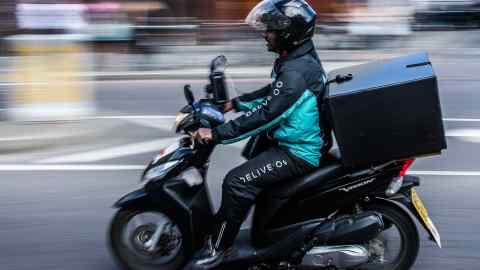 “I kind of knew it would work in central London,” says Mr Shu. But it was demand outside the capital that encouraged the company’s breakneck growth, he says: “That makes you more ambitious and want to go to more places.” Since launch, Deliveroo has raised $957m in venture capital, according to company figures.

As Deliveroo has expanded into other UK cities, Europe and Asia, critics have questioned the profitability of its business model.

This is against the backdrop of a proliferation of competing app-based services, such as UberEats, part of the US ride-hailing company, and Just Eat, another FT 1000 business.

In 2016, the latest figures available, Deliveroo made losses of £129.1m on revenues of £128.6m. Mr Shu argues that this did not reflect performance in the cities Deliveroo has been operating in longest. “That year we expanded into 11 new countries, so there’s an upfront investment required to do that,” he says.

“I can assure you that the mature markets are much more profitable than newer markets,” he adds, citing greater efficiencies and lower marketing costs. The 2017 accounts are due by the end of September 2018.

Labour groups and Deliveroo riders have attacked the company over the flexible working arrangements it has with drivers. Last year, couriers who were demanding union recognition and workers’ rights failed at the UK’s Central Arbitration Committee.

Mr Shu says this flexibility is the reason 92 per cent of Deliveroo’s casual workforce choose to work for it. The company has 1,000 people applying to do so each week in the UK, he says.

There are indications of compromise. Deliveroo now offers its drivers insurance, through a third party, for £1.85 per week. This would compensate them if they were unable to work because of illness, for example.

Mr Shu says he would like to see a sliding scale of responsibility for employees: “If you work with us for 40 hours a week then that relationship and the benefits you get should mirror that much more [those] of an employee,” he says. “However, if you log in once a year, then it shouldn’t.” He admits that this is more a philosophical standpoint than a plan.

Deliveroo could have a bigger problem. Several UK high street restaurant chains have recently closed sites or negotiated emergency deals with landlords as ingredient prices and rents squeeze the market. Of the three restaurants Mr Shu first talked into working with him, Rossopomodoro and Busaba are still open. But the third — a Chelsea eatery called The Stockpot, which Mr Shu lived above — has closed, reportedly due to rent pressures.

Deliveroo is helping businesses stay open, argues Mr Shu. “We are contributing positive like-for-like growth in the industry . . . We want to help them as much as possible.”

It now operates so-called “dark kitchens”, which restaurants can use to produce food off-site. It offers restaurants help with branding and is even extending its consulting services to advise them on adding more marketable dishes to their menus.

It is all a matter of riders, restaurants and customers, he says. Without any one of these “the whole triangle breaks down”.

If you are interested in entering your company into next year’s FT 1000 ranking, please email FT1000@statista.com