Wear your repairs with pride – inside the modern mending movement

Meet the craftspeople and artists who want to celebrate your flaws

A hole in a jumper is a fiddly thing. Darn it or patch it, the item will never be restored to its original condition. But where some people see imperfection, others revel in the chance to turn it into something new, if not better.

Tom van Deijnen is one such textiles enthusiast. His blog, The Visible Mending Programme, was founded almost a decade ago to repopularise clothes repair. Turning a flaw into a focal point should be appreciated as an art form, he says. “It allows people to wear darn as a badge of honour,” he adds, pointing to an indigo boilersuit studded with cheerful flecks of yellow thread.

While van Deijnen is one of the modern mending movement’s pioneers, the darning stitch can be traced back to the 18th century, when it was taught to young women as an essential skill. The sashiko stitch, meanwhile, has its roots in Japan’s Edo period. Both form the backbone of visible mending today. “I wouldn’t like to say that mending is a trend,” offers Swansea-based artist Angela Maddock. “It’s always been done, often out of necessity.” Where visible mending differs is in the desire to turn a functional process into a creative one.

Much of the renewed interest in repair is a response to fast fashion: 92 million tonnes of textile waste are created each year. According to resources charity Wrap, expanding the lifespan of a garment by just nine months could significantly reduce its impact on the environment. Trend forecaster Li Edelkoort presented her “hope manifesto” – a prediction of our post-pandemic behaviour patterns – back in April. “The comfort of being at and working from home, wasting time instead of money, has led people away from their addiction to material things and into a realm of sharing, caring and making,” she says.

“Repair has so many parallels with hope,” agrees Maddock, who used to work as a counsellor. “Repair is restorative. If you have an attachment to something and it becomes worn, what do you do with it? Do you throw it out, or do you intervene to save it? There’s a nurturing quality that we can think about through the experience of remaking things.”

Mending can also be deeply personal. A treasured item of clothing will take on the shape of its owner – the point of an elbow, say – and reinforcing those areas with thread allows you to capture that imprint. “I can see how my body works,” affirms Hikaru Noguchi, a knitwear designer and author of four books on the subject. “Everybody has different areas for damage.”

Maddock, Noguchi and van Deijnen offer repair workshops. As does Celia Pym, who last year was commissioned by slow-fashion label Toast to salvage the jumpers and socks of customers who had responded to a callout on Instagram (@celiapym). The results were showcased in-store as part of London Craft Week, with Pym relaying the story of each garment. Toast has also been offering tutorials with mender Molly Martin since 2018, and has its own repair specialist.

At this year’s Craft Week, there was an exhibition from repair artist Bridget Harvey at Ruup & Form, darning lessons with haberdashery Ray Stitch, and workshops in kintsugi – the art of repairing ceramics with lacquer and precious metals – with Iku Nishikawa at Wagumi. Guy Salter, chairman of the festival, was introduced to visible mending by his great-grandmother, but it wasn’t till he visited Japan that he “really appreciated it as something approaching an art form”.

Harvey takes a multidisciplinary approach, with reworked ceramics on her feed (@bridgetharvey) as well as creatively darned jumpers. “I look for materials that present me with multiple ways of working,” she says, although textile mending is best on fabrics that “age well and mend well”, meaning high-quality wool or denim. Dismantling fashion’s throwaway culture isn’t just about producing clothes that are built to last, but making them repairable.

And visibly repairing things is fulfilling. Nishikawa takes pleasure in “learning the simple skills of kintsugi as you would playing scales on a piano”. Maddock finds joy in the act of “filling holes”, which “allow us a way in. A jumper that is holed and repaired is more mine than it was before. Repair enables a closeness to an object.” 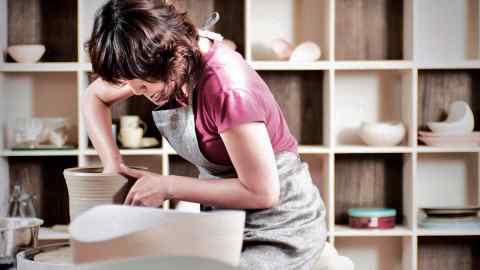