Why vintage seaplanes are taking off

Whether in Scandinavia, Florida or Lake Como, fans can’t resist the amphibian appeal of this hybrid aircraft

“Flying a vintage seaplane is the most fun you can have with your clothes on,” says Steve Slater, 61, vice-chairman of the Vintage Aircraft Club based in Northamptonshire, and a member of the Honourable Company of Air Pilots. Seaplanes evolved from the beginning of the 20th century, but they gained real recognition after the second world war, with thousands of models appearing. While some pilots attached floats to 1930s and ’40s Piper Cubs, creating “floatplanes”, manufacturers created “flying boats” that float on their hulls, some with retractable wheels for terra-firma movements – see the cult Seabee. James Bond flew one to Scaramanga’s island lair in 1974’s The Man with the Golden Gun. Now the market for these models is throttling up once more.

“There’s an essence of freedom with a seaplane,” confirms Hamish Mitchell, an air traffic controller in Scotland who owns a 1969 Cessna 172 seaplane with retractable wheels called Wee Dram. He finances it running air safaris and seaplane-conversion courses for licensed aviators through Scotland on Floats. “Scotland is like a mini-Alaska. You see beauty from a seaplane you wouldn’t otherwise see.”

Flying seaplanes off English or Welsh inland waters is tricky, but mostly permitted in Scotland and Northern Ireland. It’s one reason why they remain relatively scarce in Britain. Elsewhere it’s a different story. Alaska’s Lake Hood alone accommodates on average 400 daily take-offs and landings, many by simple but robust vintage aircraft. Lake-rich Scandinavia is another hot spot, while Italy’s Lake Como is repeatedly named as the best destination, whether self-flying or renting Aero Club Como’s fleet. Allan Vogel of Historic and Classic Aircraft Sales, Buckinghamshire, says demand for the planes is escalating internationally. “In the past five years vintage Piper Cub floatplane values have tripled, some to $100,000. It’s the simple attractions: take your fishing rod and fly to an amazing location.”

British seaplane enthusiasts are currently eyeing up North America, says Slater, where inland waters regulations are more accommodating; the Vintage Aircraft Club’s Richie Piper adds that Florida especially is on their radar. Just as car clubs meet for barbecues, seaplane owners gather socially on North American lakesides. “Flying is very liberating in the USA,” says Piper. “Vacation homes on the water have seaplane moorings; there are few restrictions to operating on inland waters. Buying a seaplane and keeping it abroad is a viable proposition, including from an investment perspective.”

The 1945-46 Republic Seabee looks like something from a Flash Gordon movie – and it’s especially rare, having only been in production for two years after the war. The Seabee Owners’ Club members trade via its website, primarily in North America. Ready-to-fly aircraft start at around $40,000; award-winners nudge $160,000.

Ten-hour UK and Europe seaplane licence conversions cost £3,000 to £3,500; it’s $2,099 for a five-hour American version. Derek Head, deputy chief flying instructor at Plane Sailing, says seaplane landings require a different technique to runway touchdowns. “And at that point where you become a boat, you need to be qualified in seamanship to correctly observe water conditions, manoeuvre and moor up safely, as you would with a boat.”

Dubliner Ciara O’Toole is a board member at Aero Club Como. The world’s oldest seaplane training school, founded in 1930, is a bucket-list destination for water-addicted pilots drawn by its legendary social calendar. Fascinated by the aircraft, O’Toole took lessons, was quickly hooked by mountain and lake views, and qualified in 2011. At the Club, you can rent a member-owned 1935 Caproni CA 100, a 1961 Cessna 305 Bird Dog and a 1946 Seabee. (The Bird Dog rents out at between €231 and €351 per hour after the €480 to €900 club membership fees.)

HTSI
Why Chinese snuff bottles are not to be sniffed at 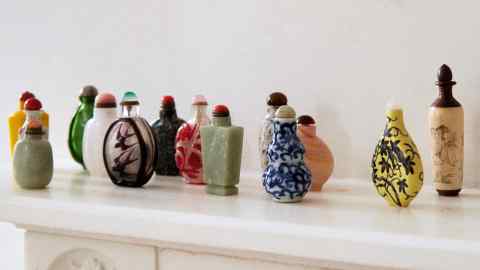 O’Toole will sit in the club bar with an aperitivo watching the animated end-of-day putting-away of aircraft: “The hangar is in town across the road from the lake. Locals are used to it, but tourists stop in their tracks as planes are pushed to and fro. It would never be allowed if proposed today.

“Watching aircraft being put away, you never think they’ll fit. It’s poetry in motion. The geometry of wings and tailplanes somehow works, and with a lot of shouting and arm-waving it’s done in five minutes.”