Get the newsletter now
Brexit

Liam Fox will on Monday launch a fresh attempt to boost the UK’s trade relationship with the US, arguing that commercial ties between the two nations could be worth an additional £40bn in the decade after Brexit if both sides remove existing barriers.

On a two-day trip to Washington, where he will meet leading figures in the Trump administration, the international trade secretary will acknowledge that there is a limit to how far discussions on a US-UK trade deal can proceed while Britain remains in the EU.

But Mr Fox said on Sunday that an internal analysis by his department showed that bilateral US-UK trade could rise from £167bn a year to about £207bn by 2030 “if we’re able to remove the barriers to trade that we have”.

As he prepares to meet US Trade Representative Robert Lighthizer, Mr Fox told the BBC: “It will be a difficult discussion . . . but we’ve got great support from the United States and the administration as well as Congress to help push the agenda forward.”

He added: “Agriculture’s always a very difficult issue . . . but we’ll want to look at a whole range of other things, on financial services, for example, and other parts of the service economy.”

Mr Fox’s visit comes as he faces mounting pressure from Philip Hammond, the chancellor, to prove that Britain can secure lucrative trade deals with non-EU states after it leaves the EU in March 2019.

The trade secretary said on Sunday that he had been won round to Mr Hammond’s idea that there should be a two-year transitional period after Brexit happens to minimise disruption for British business.

“Having waited for over 40 years to leave the European Union, 24 months would be a rounding error,” Mr Fox said, adding that the transitional period must be over before the next election in 2022. “I don’t think people would want to have it dragging on,” Mr Fox said.

However, cabinet-wide agreement on a transition is only part of what Mr Hammond has been seeking. He is also pressing for the UK to remain in an arrangement similar to the customs union throughout the transitional period to ensure that the UK economy does not fall off a cliff edge.

The chancellor believes that Britain should prioritise EU trade during the transitional period and should only give up on joining an “associate customs union” if Mr Fox has nailed down big trade deals that would offset the loss of trade with Europe. 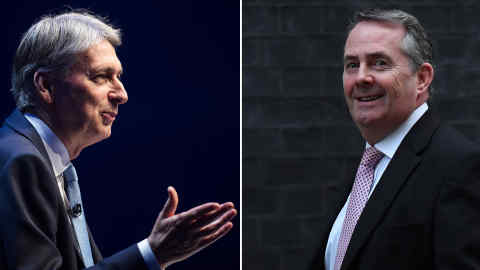 Mr Fox warned on Sunday that if the UK stayed in a customs union arrangement after Brexit “we wouldn’t be able to take full advantage of the freedoms available to us when we leave the European Union.” He added that “there’s still a discussion to be had” on the issue.

One leading UK business figure warned on Sunday that a headlong rush into a “politically attractive” trade deal with the US risked exposing British companies to hostile takeovers and handing American groups the upper hand.

“The US has many of the world’s toughest trade negotiators, whereas the UK has ceded policy and know-how to the European Commission for decades,” Adam Marshall, the head of the British Chambers of Commerce wrote in the Observer. “If talks began on a US-UK deal over the coming months, I know which of the two I’d put my money on.”

Mr Marshall added: “There is a huge risk that UK-based firms will continue to face higher upfront costs and regulatory requirements after any agreement, leaving them at an instant disadvantage to US competitors that would suddenly have wider scope to compete in and buy up chunks of the UK market.”

Mr Fox’s US visit came as Jeremy Corbyn, the Labour leader, said that Britain would have to end its membership of the single market after Brexit because the two things “are inextricably linked”.

However, Mr Corbyn left open the question of whether the UK should remain a member of the customs union.