Once Upon a Time . . . in Hollywood is Tarantino’s best and bravest movie since Pulp Fiction

Whenever I picture Quentin Tarantino, I see him wired up in the critical ward of Hospital Moviemania. His life-support tubes are made of sprocket-holed celluloid. His vital-signs video monitor has cameo appearances from old movie stars. And the nurses are stellar blondes resembling Margot Robbie, who in QT’s new film plays the 1960s starlet Sharon Tate.

Once Upon a Time . . . in Hollywood is set in the year and place of the Manson murders. Los Angeles, 1969. It is Tarantino’s best, bravest and most confrontationally impudent movie since Pulp Fiction. It is played like one long exclamation mark — an exhilarating impersonation of a giddy, garish, ghastly-for-some moment in Hollywood history — while for doubters or detractors it may be one long question mark. How can you base your story on a tragedy and play it for comedy? How many liberties with fact can you take, in fiction, before you’re a criminalisable artistic anarchist?

I won’t spoil the last half-hour: it defies all expectations and known canons of taste. But expectations exist to be defied. And when canons of taste get old, they blow themselves up anyway. It is probably time to re-examine both 1969 and 2019. How should we respond to extreme events in history? How does reality interact with showbiz and vice versa? And how can Robert Redford and Paul Newman — yes, Butch and Sundance was 1969 too — turn into Leonardo DiCaprio and Brad Pitt, in a 50-years-on buddy Western all at once postmodern, post-ironic and proto-apocalyptic?

DiCaprio is Rick Dalton, ageing TV action star, whose career is curdling into cameos. His agent (Al Pacino doing a turn and nearly having one) wants him to go to Italy to make pasta Westerns. Pitt is Rick’s stuntman, friend and driver, and perhaps the movie’s real hero. To judge that, watch its longest scene of action/suspense: a stand-off at the Spahn Ranch, the onetime film backlot that became the Manson gang’s pre-murders hang-out. (Bruce Dern electrifies as Spahn, old and semi-blind, in a role originally written for the late Burt Reynolds.) 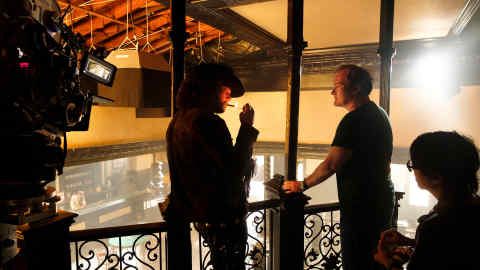 DiCaprio is riotously poignant as the washed-up protagonist. He is every Old Hollywood gene of gallantry and insecurity, slipping towards a whiskied second childhood. In a brilliantly scripted conversation scene with a precocious eight-year-old, his co-star in a telly Western, she has the wisdom of centuries, he the bewilderment of a newborn sliding helplessly down the New Hollywood birth canal.

Sharon Tate and her fellow victims-to-be weave in and out of the plot. Their Benedict Canyon mansion is next door to Rick’s. In mid-movie, Margot Robbie as Tate flits into a downtown screening of The Wrecking Crew, the Dean Martin popcorner she starred in. We watch her gauge the crowd reaction: another touching index of the vulnerability of the notionally invulnerable.

The last scenes of Tarantino’s film assault the factual with the newly minted mythical and somehow transcend the charge of tastelessness. I’m still unsure how: it must be by the conviction of his pop-culture comical seriousness. He sees the joins between manufactured hokum and everyday horror. More Conradianly, he sees that sometimes there are no visible joins. The Mansons were composing their very own terror fairy tale “once upon a time in Hollywood”. And real people from the world of designer unreality were chosen — appositely by the heuristic logic of their worldly Hell — to be their doomed collaborators.

Explore the series
READ MOREBest films of 2019
The Irishman — a Hoffa you can’t refuse from Scorsese, De Niro and Pacino 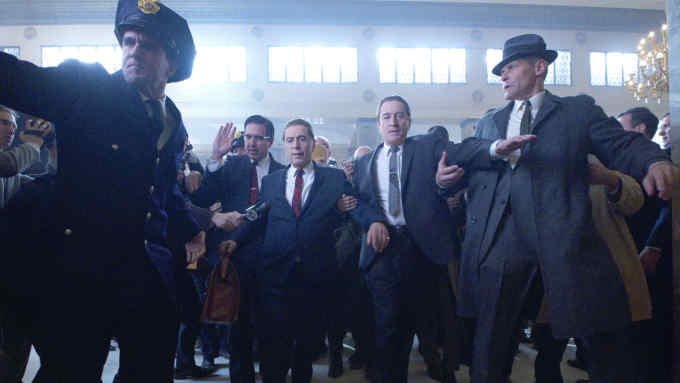