Stand Out is curated by Luke Syson, who wants to highlight the value of art objects

Visitors to Frieze Masters next week may well find themselves trapped in the mesmerising stare of a cold-eyed Medusa, gazing out from an inky black shield. With her iridescent snake-hair, Arnold Böcklin’s 1887 painted plaster is a showstopper rendition of the Gorgon. “It’s so strong it almost gives you the shivers,” says Stuart Lochhead, the London dealer bringing it to the fair (it’s priced at £490,000). “The last time one of these came up, it went to the Musée d’Orsay.”

Lochhead is part of Stand Out, a new section at Frieze Masters featuring nine galleries brought together by Luke Syson, director of the Fitzwilliam Museum in Cambridge since 2019. Syson has toggled between the US and UK over the years, popping up at the British Museum, the V&A, the National Gallery and the Met in New York. In 2015, he missed out on the top job at the National Gallery, where in 2011 he had brought together the highest number of Leonardo’s paintings in one place for an exhibition.

But despite his scholarly reputation around Renaissance painting, he is equally wedded to the world of objects, which forms the basis for the Stand Out selection. “Projects like the British galleries at the Met, which I worked on starting in 2013, have demonstrated that people are interested in things,” he says. “Including them provides a larger, more ample and complex art history.”

By disregarding the western hierarchy that places painting firmly at the top of the economic and intellectual pyramid, Syson says, “we can more easily include makers and countries which have hitherto been undervalued and even excluded by the western canon. The value — and the values — of art objects has never been a problem outside Europe. And before the Renaissance, it wasn’t here either.”

With a strong focus on materials, Syson is bringing some new names to the fair. The Roman dealer Alessandra di Castro, for example, who focuses on Italian art of 1600-1900, is a newcomer, presenting works in stone, granite, porphyry and marble. Her 17th-century Baroque slab with skulls and leaves picked out in multicoloured mosaic on a marble ground will certainly be hard to miss.

The Belgian Gisèle Croës, a specialist in Asian antiques, will show works from along the Silk Road — including a ninth-century Tang dynasty white glazed jar — that demonstrate the forms and technologies that flowed back and forth along the route. Raccanello Leprince are bringing functional, if fabulously decorated, majolica jars that once lined the shelves of the pharmacies of Renaissance Italy, speaking of the healing powers of both medicine and art.

Syson says that he had been in conversation with Frieze Masters and its first director, Victoria Siddall, since the fair began nine years ago. “Victoria and I discussed what part objects might play in a place like Frieze Masters,” he says. “At an institution like the Met, with a lot of acquisition capability, you become more aware of the expertise and the role of specialist dealers.”

He learnt from US collectors: “There is such an active collecting culture, and what you see in people’s homes is astonishing. It makes you realise that the worlds of museums and personal collecting are not at all separate.”

Ultimately, Syson is on a mission to take the slightly dismissive word “decorative” out of the decorative arts category. The works in metal, for example, brought to the fair by London dealer Prahlad Bubbar include a 17th-century head of the goddess Gauri from Karnataka and in Syson’s view are a long way from mere fancy. “Metal,” says Syson, “has a transportative quality; it’s cool, otherworldly.”

For Lochhead, an 1885 plaster caryatid by Rodin offers access to a more personal work that would have been made by the artist probably as a gift. “People might go for Rodin’s bronzes,” he says, “but this plaster work is so close to Rodin’s own hand. It wasn’t made in a foundry, it was made by him.”

With their synthesis of influences from Asia, the Renaissance and nature, the British, continental and American furniture from 1890 to 1930 brought by Oscar Graf can be seen as a summation of Stand Out. “For me,” says Graf, who is based in London and Paris, “it makes no sense not to show decorative arts. They furnished the same houses as the paintings.”

After almost a decade, Frieze Masters is ready for some radical expansion and can be confident in its choices. For Syson, Stand Out is about examining meaning and complexity through ornamentation and the material. “It’s all about ideas,” he says. “I’m very much hoping to bring about a bit of re-evaluation here.” 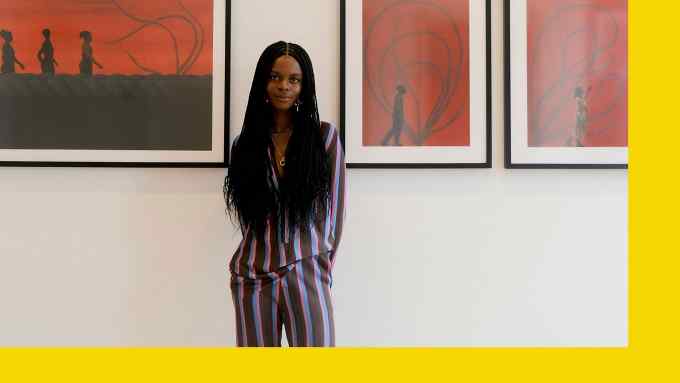