On a recent weekday morning, Liu Ai’jun boarded one of eight daily high-speed rail services between Urumqi, capital of China’s north-western Xinjiang region, and Hami, an oasis town 614km to the east.

The trip, along the longest and most expensive line in the country’s HSR network, took just three hours and cost Rmb167 ($24). Previously Mr Liu, a self-employed elevator salesman and technician, used to rely on infrequent and expensive flights between the two cities. Before the new HSR line was completed in 2014, the train between Urumqi and Hami took seven hours.

“If you’re not in a rush, why not take the train,” Mr Liu said. “The train is a lot more relaxing [than flying].”

The convenience to Mr Liu has come at a considerable cost to state-owned China Railway Corp, which over the past decade has built the world’s largest HSR network with 25,000km of track. Today, just a decade after construction began, two-thirds of the world’s HSR tracks have been laid in China.

The December 2009 debut of China’s first long-distance high-speed rail service, which raced 1,100km between the southern city of Guangzhou and Wuhan in central China in just three hours, was a dramatic example of the Chinese Communist party’s debt-fuelled response to the global financial crisis.

Such investment projects fuelled demand for concrete, steel and other industrial commodities in the world’s second-largest economy in the years after the crisis. But they have also saddled China Railway and other state-owned enterprises with huge amounts of debt.

In the decade to 2016, Chinese corporate debt levels rose from 100 per cent of gross domestic product to 190 per cent, or Rmb141tn. As of March, China Railway’s total debts stood at Rmb5tn. According to Li Hongchang, a transport expert at Beijing Jiaotong University, as much as 80 per cent of the company’s debt burden is related to HSR construction.

For critics of China Railway, the HSR network is a debt crisis waiting to happen, dependent on unsustainable government subsidies with many lines incapable of repaying the interest on their debt, let alone principal.

“China Railways has always depended on financial subsidies and continues to raise new debt to pay off old debt,” says Zhao Jian, a colleague of Prof Li’s at Beijing Jiaotong University. “[This] will inevitably lead to a railway debt crisis.”

Prof Zhao estimates that China Railway’s overall debts will grow 60 per cent over the next few years, reaching Rmb8tn by 2020.

China Railway did not respond to interview requests for this article.

In the first quarter of this year, China Railways reported a net loss of Rmb376bn. During the same period, bank loans accounted for Rmb156bn, or more than 60 per cent, of its total funding. The company’s interest payments on its debt have exceeded its operating profit since at least 2015.

Earlier this week, China Railway announced it would invest more than Rmb800bn this year, 10 per cent more than originally budgeted. The company intends to expand its HSR network to 30,000km of track by 2030.

The Lanzhou-Xinjiang line that Mr Liu travelled is the longest, and most controversial, link in China’s HSR network. Built at a cost of Rmb140bn, it connects three large north-western provinces inhabited by 53m people — a relatively low total for China — in a combined land area bigger than Argentina.

This flies in the face of the basic economics of high-speed railways, which work best at relatively short distances through densely populated corridors.

Designed to handle 320 trains a day, the Lanzhou-Xinjiang HSR currently has only eight daily services. “Because of this large amount of idle capacity, [the line’s] annual revenues are not enough to pay for its electricity costs,” said Prof Zhao.

While few supporters of China’s HSR network would disagree that the Lanzhou-Xinjiang line is a white elephant of enormous proportions, they say that looking at one line in isolation misses the very point of the network.

They argue that profitable lines such as China Railway’s lucrative Beijing-Guangzhou HSR corridor, which links six provinces with a total population of 430m, will ultimately balance out lossmaking ones.

“The lines will be here for the next 40 years,” said Gerald Ollivier, a senior World Bank infrastructure specialist who focuses on China HSR projects. “You need to look at that timeframe, which distributes the fixed costs over many more years, and passenger growth to understand the true financial story.”

“For these kind of projects the banks lend at sovereign rates. It makes the financials work out,” he added. “When reviewing China’s HSR network [in 2015] we found it should be able to cover its costs on a long-term basis, as long as ticket prices increase to cover inflation . . . That doesn’t mean that in the short term there won’t be a need for refinancing some of the principal payments, because loan durations tend to be much shorter than the life of the asset.”

How do HSR lines compare?

China’s huge leveraged bet on HSR has also generated many other benefits as it dramatically shrinks distances, transforms lives and boosts regional economies. The now three-hour, 1,100km train ride between Guangzhou and Wuhan used to take 11 hours, and tickets are now priced at just Rmb464.

Annual travel on China’s HSR lines — 1.7bn trips — exceeds travel on conventional rail services. And about half of all HSR trips are, like Mr Liu’s, business-related.

“When you think about that, a staggering 850m people are travelling [on HSR] to meet customers, get to their job, visit research centres and so on,” said Mr Ollivier.

If China Railway’s HSR network is ultimately able to pay for itself, it will be a testament to the miracles that can happen when the Chinese Communist party marshals the vast financial resources at its disposal to serve a common good. But if it cannot, there is little doubt who will have to make up the difference. 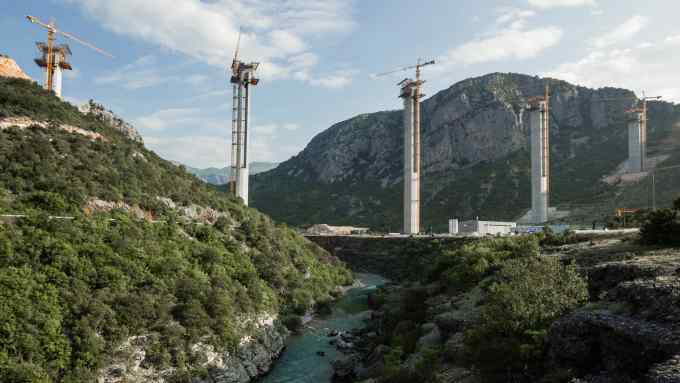 China responded to the global financial crisis with a huge surge in debt-fuelled investment. How bad has its debt problem become? Is there a risk of a financial crisis in China or of a sustained decline in growth, as a result of poorly-allocated capital?

Mixing analysis from Martin Wolf and in-depth reporting, our writers will seek to answer these vital questions