Get the newsletter now
Artificial intelligence

‘Alexa, are you a help or a hindrance at work?’

Amazon, Google and others are yet to find many uses for voice-powered AI in the office

“Smart speakers” such as Amazon’s Echo and Google Home can be an annoyance in the office. They sometimes spring to life unexpectedly, even when no one has spoken the “wake up” word.

Nor are there many obvious applications for voice-powered artificial intelligence at work yet. One customer listed by Amazon is WeWork, the shared office space company, which conducted a pilot using a voice-powered reservation system for its conference rooms. But WeWork doesn’t seem to consider it much of a priority: it says it put the project on hold after a new chief technology officer arrived at the company and questioned its importance.

The devices also tend to sit, dumb, waiting in vain to be woken up. “The most vexing thing is, people don’t know what questions to ask these things,” said Javier Soltero, head of Cortana, Microsoft’s AI personal assistant. “How do you query this thing about its capabilities?”

Yet for all the reasons to be doubtful, some of the biggest technology companies are suddenly in a hurry to bring voice-enabled AI into office life.

The surprise consumer success of Amazon’s Echo speaker — and Alexa, the voice service that sits behind it — has sparked “mainstream curiosity” in the technology, says Mr Soltero. “People have got very curious about how a computer without a display can be a useful tool” at work.

Amazon, for one, is betting that the same “consumerisation” trend that brought smartphones and other consumer technologies into work life will do the same for voice.

Nathan Brooker
We should be nicer to Alexa 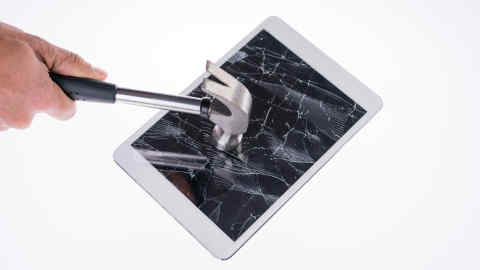 “The enterprise world is looking to offer the same level of experiences to their workers that they are getting in their private lives,” said Werner Vogels, Amazon’s chief technology officer. “Voice is a very important interface to digital systems.”

That said, some of the main uses that have fuelled its adoption at home do not exist at work. Popular consumer applications include playing music and controlling “smart home” functions. Many workers also sit in front of screens and keyboards, reducing the need for a new, hands-free form of computer input.

One result is that using voice-based systems for work may take off first outside the office. Software company Salesforce, for instance, this week showed off two features it plans to release soon: a way for salespeople coming out of meetings to quickly update their records by speaking into their smartphones, and a daily voice briefing about upcoming meetings and other work issues that people will be able to listen to over their home smart speakers.

The use of voice AI in the office is also being held back by a technology lag. While computers these days are good at identifying spoken words, they often stumble over discerning meaning, due to the ambiguities in language and the heavy dependence on context in human conversation.

“We call it ‘voice’, but the crux of it, and the hard research area, is below the voice, the natural language processing — actually understanding what is being said,” said Richard Socher, head of AI at Salesforce.

These limitations have led to only rudimentary attempts so far to bring voice AI to work life. But the tech companies working on the problem see these as merely the first steps in a transformational new workplace technology, and are pushing on three main fronts.

Interactions with business software applications often fall into this category — such as updating a Salesforce record without needing to open the software. Amazon earlier this year added a feature to its Alexa for Business service to schedule or move meetings with a spoken command.

As natural language processing improves, say the experts, the machines will start to respond more intelligently, leading to a dialogue in which more complex tasks are handled. “Nobody in the next couple of years will want to use a system they can’t have a chat with,” predicts Mr Socher at Salesforce.

A second front involves linking the voice-input and language understanding technology to a company’s other intelligent systems, so that machines can start to offer more useful responses.

If you’re building a platform, you have to be willing to be surprised

Focusing only on the voice component of the technology was “a head fake”, said Mr Soltero: what really matters is the intelligence working in the background to make workers more productive, with voice only acting as one of the ways people will connect to these systems. They include full “personal assistants” such as Cortana and Siri that seek to replicate the kinds of support a human assistant would provide — a role that Amazon’s Alexa is also growing into.

For now, the assistants can be invoked by voice for only basic tasks. Microsoft has linked Cortana to its office chat system, called Teams, so that workers can start a video conference with a voice command, for example. But they could eventually develop a mind of their own.

“I think the leap will come when these things wake up and tell us useful stuff proactively,” says Mr Soltero — such as warning of a scheduling conflict or nudging a worker about something they need to finish ahead of a meeting.

The third frontier lies in listening in to meetings, or conversations with customers, and putting the information to better use. Some voice applications are already doing this in narrow contexts, such as call centre software used to train workers in how to deal with customers better. 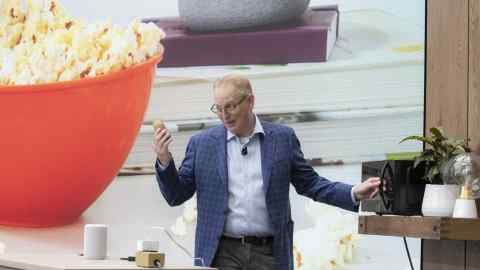 This could be extended to monitoring more general work meetings, taking notes and suggesting items to follow up on later — or even to tracking all conversations that happen in an office.

“Eventually it will be much more seamless and will always be there, as long as privacy and trust allows it,” says Mr Socher. “It’ll just keep track of everything that’s going on.”

That may sound far too intrusive for most office settings. But for now, said Mr Vogels, the use of voice AI at work was only at a very early stage: the real question is what use developers will make of the new capabilities that companies such as Amazon are building. “If you’re building a platform, you have to be willing to be surprised,” he said.