Eight days that shook the oil market — and the world

Earlier that day, the oil cartel had announced plans for additional production cuts of 1.5m barrels a day for the next three months in response to collapsing global demand because of the coronavirus outbreak. But just hours later, the proposal was in trouble. The oil market was not buying it and — worse — neither was Russia, Opec’s partner in a three-year alliance.

“From the beginning the Russians were just not playing ball,” said one person familiar with the weeks-long negotiations.

After lobbying Moscow heavily to take on new cuts, it was now decision time. Prince Abdulaziz, with the backing of his half brother — the powerful crown prince, Mohammed bin Salman — and his Opec peers changed the plan that night, promising more prolonged cuts. But to enact them, Russia had to agree. It was an ultimatum.

Few, even in Riyadh or Moscow, could have predicted what followed in the days after, as an already ailing oil market went into meltdown.

Interviews with dozens of Opec officials, government advisers, traders and energy executives build a picture of a sector that was perched precariously and is now in freefall.

Since the Park Hyatt meeting, benchmark Brent crude has fallen 34 per cent, the world’s biggest oil and gas majors have seen billions of dollars wiped from their share prices — deepening the broader market sell-off — and producer economies fear the fallout.

Saudi Arabia and Russia — once unlikely allies — are in a fresh battle for market share. “This is the nuclear version of a price war, when demand destruction is already beyond parallel, or frankly comprehension,” said Roger Diwan at consultancy IHS Markit and a longtime Opec watcher.

The calm before the eruption in oil markets was striking.

As Opec was meeting in Vienna last Thursday, Darren Woods, ExxonMobil’s chief executive, strode on to a dais inside the colonnaded New York Stock Exchange building to begin his company’s annual investor day. In the hallways, staff wiped down door handles with disinfectant.

His audience was in no mood for niceties: Exxon’s market capitalisation before the exchange opened an hour later was about $222bn, less than half its value from the days when it was the world’s most valuable public company.

Yet Mr Woods was sanguine about any looming threats. The market was in “a very classic commodity cycle”, he said. Brent crude was trading at $50 a barrel.

Exxon would, though, ease off a bit on its breakneck shale expansion — an investor-pleasing move. Even shale experts, like Concho Resources, EOG and Diamondback Energy, were pledging more modest growth, oodles of free cash flow and dividend payments.

US producers were confident that the Saudi-Russia oil alliance — in place since 2016 — would keep supporting crude prices, and allow their sector to flourish as economies of scale, consolidation, and manufacturing-style drilling processes came to bear.

Some of their investors, though, were still nervous. As the Vienna meeting neared, fund managers began to draw up scenarios about how a sector already struggling to repay investors at $55 a barrel would cope if Saudi Arabia pulled the plug. Some, sniffing danger, had even made their move, building big short positions in US oil companies that would be especially damaged by another oil slide.

“What would happen if Opec stopped cutting?,” asked one hedge fund adviser over dinner in New York. “Shale would be f**ked.”

The Russians lose their temper

Russia, it is now apparent, agreed.

It had bristled as shale production spiralled ever higher thanks to its price-supportive cuts with Opec. Washington’s decision last month to sanction the trading arm of Rosneft, the state-controlled Russian oil champion, only deepened Moscow’s animus against the US oil patch.

In the background was Igor Sechin, Rosneft’s boss and close confidant of President Vladimir Putin. He was long opposed to the cuts with Opec and personally affronted by the new sanctions. The coronavirus crisis offered an opportunity to strike. “This action was not about the oil market. It was about egos and getting even,” said one Opec delegate.

Alexander Novak, Russia’s energy minister, flew into Vienna on Friday morning. “You could tell something was wrong,” said one person who was present as he arrived for negotiations with Opec. Mediation efforts between Russia and Saudi Arabia failed. The full gathering of the cartel and its allies lasted just 30 minutes. Russia would not cut further. Mr Novak had earlier told other non-Opec allies: “I have nothing more to give”, according to one person briefed on the matter.

As he left Opec’s headquarters to return to Moscow, he told waiting journalists that producers would be free to pump at will from April 1.

Saudi Arabia’s leadership saw this as a provocation and, almost immediately, launched a plan to ramp up production. “This was an extraordinary period, that required extraordinary measures,” said the Opec delegate about the need to cut production to bolster the market. But “if oil prices were going to fall, there was a need to recoup some losses”.

The price war was on.

‘The Saudis have gone mad’

On Saturday, the kingdom fired its first salvo. Saudi Aramco, the state energy company, slashed the price of its crude oil by as much as $8 a barrel. The biggest discounts went to buyers in north-east Europe, a crucial market for Russian exporters.

“Once you have made a decision, you have to follow through and give it a good go,” said the person familiar with the Saudi-Russia negotiations.

Traders braced themselves. Doug King, a hedge fund manager, said when he saw how heavily the kingdom was discounting prices he knew immediately it would be “absolute carnage” in the oil market.

Mr King, who runs RCMA’s Merchant Commodity Fund, said: “I thought the Saudis have gone mad . . . It’s an attempt to flood the market.”

From Singapore to London, companies such as Vitol, the world’s largest independent oil trader, had their staff at their desks in time for the New York market open on Sunday night, poised to begin trading oil futures as soon as the electronic board lit up.

A flood of sell orders pushed Brent crude down more than 30 per cent to below $35 a barrel.

The Saudi strategy was aimed at “as large and as rapid an oil price fall as possible”, said Paul Horsnell, head of commodities research at Standard Chartered. The plan seemed to be working.

On Monday morning, the International Energy Agency, the world’s leading energy forecaster, predicted oil demand would contract for the first time since 2009 — another reminder that the market was not just facing a supply shock, but an even bigger demand one, too. Across the Atlantic, fund managers scrambled for cover. The founder of one large Manhattan hedge fund told his employees to be in the office by 6am, ahead of the impending sell-off on the NYSE (fearing the virus, he did not turn up himself).

In Moscow, there appeared to be less panic. The finance ministry said Russia could withstand an oil price of $25-$30 a barrel for the next six to 10 years. Then the kingdom hit back with a double-whammy. On Tuesday, it told Saudi Aramco to lift supplies by a quarter, to 12.3m b/d, which was 2.6m b/d more than its recent production. A day later, it issued a directive to expand output capacity to a record 13m b/d. Russia also said it could pump higher levels.

Meanwhile, the coronavirus havoc was spreading. Italy effectively shut down, European governments devised emergency measures to counter the virus and President Donald Trump banned non-US citizens from travelling to the US from most European countries. The IEA’s forecast had already started to look tame.

Demand-side problems were mounting just as the supply-side war escalated.

Anyone wondering if Saudi Arabia and Russia were serious about their price war had an answer.

US companies survived the 2015-16 price war by getting more efficient, slashing costs and focusing on the most productive sweet spots in their acreage. They also had Wall Street behind them, extending credit lines, buying producers’ bonds, and taking equity.

Those crutches are gone.

While Saudi Arabia and Russia were flexing their production muscles, the shale sector began its retreat, as companies announced plans to idle rigs and cut budgets. At current prices, capital spending would drop by 70 per cent next year, predicted Rystad Energy, a consultancy, and production would fall by 2m b/d. Bankruptcies are inevitable, say analysts.

On Tuesday, Vicki Hollub, Occidental Petroleum’s chief executive, cut the dividend by almost 90 per cent — just weeks after saying the generous payout was core to her company’s philosophy. On Thursday, the activist investor Carl Icahn almost quadrupled his stake in Occidental and called for Ms Hollub to be sacked.

There were other big-name casualties. By Thursday, BP’s shares had sunk to a 24-year low. Exxon’s market capitalisation had shrunk further to just $178bn and analysts were wondering which would survive — its dividend or its spending plans. US energy executives, so sanguine a week earlier, were now lobbying the White House for aid. Mr Trump, however, seemed more pleased about lower gasoline prices ahead of an election.

“This price war is much more serious than the previous one,” said Ekaterina Grushevenko, senior energy analyst at Moscow’s Skolkovo business school. “This time we are witnessing an unusual combination of factors: overstocking the oil market and a demand shock.”

People briefed on Saudi Arabia’s stance said that with market conditions as they are and without a meaningful shift in position from Russia, the broken alliance will stay that way. The Saudi strategy, for now, is in place.

“It will persist,” said the Opec delegate. 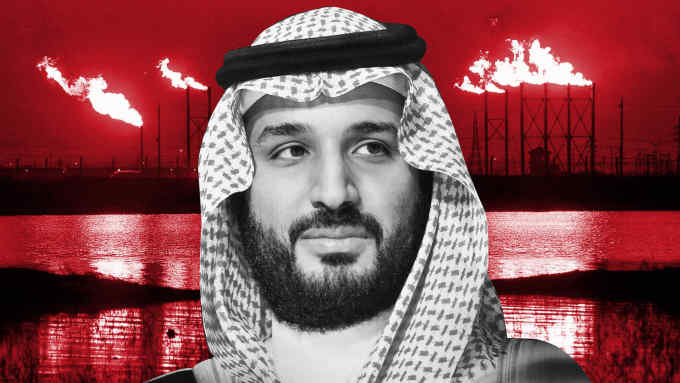 An aggressive move from Saudi Arabia caused oil prices to collapse and sparked the heaviest stock market sell-off since the 2008 financial crisis. Why might the US be the hardest hit? Here’s the best of this week’s opinion and analysis