Get limited time offer
How To Spend It  Style

Beijing 1986: portraits of a forgotten China

A trove of lost photographs, taken by a junior teacher more than 30 years ago, revisits a country on the brink of social change and a landscape near eclipsed from history

Words and pictures by Patrick Dransfield

Recently clearing out my Hong Kong flat as my wife and I are empty nesters (our three children now all in the UK), I came across a large plastic bag filled with negatives, around 50 of them, tightly rolled and wrapped in thin tissue paper. The contents of the bag had not seen the light of day since I pressed the shutter of my camera in the heady summer of 1986, when I lived in Beijing and also travelled by steam locomotive to the city of Datong, Shanxi province, famous for the fourth- and fifth-century Yungang Buddhist caves.

The camera, a 1960s Shanghai-manufactured Seagull, is a replica of the twin-lens periscope camera used by Chicago-based Vivian Maier, who evidently – like me – found satisfaction in simply pressing the shutter on that eternal moment expressed so poetically by the patron saint of street photographers, Mr Cartier-Bresson. Mine was bought with every spare yuan I had from a pawn shop on Wangfujing, Beijing’s Oxford Street. It cost Rmb100, a week’s wages, earned as a junior teacher at Beijing Shifan Daxue (Beijing Normal University), which specialised in teacher training. The camera did not come with a light meter and had no instructions.

Fortunately, I was young and unattached and time seemed abundant – as did 120 black-and-white film – and darkroom development was cheap. A recent graduate from Leeds University, I had spent the past four months teaching spoken English at Beishida (as the university is known) and working for the Newsweek bureau, while staying with a retired Chinese couple in Zhongguancun, the intellectual quarter of north Beijing. The area was later to become the city’s Silicon Valley. At that time it had a single telephone, sitting black, majestic and unused on the shelf of the local grocery shop.

For three months I dedicated myself to taking pictures. My daily cycle route consisted of a 30km round trip on my “Shanghai Pigeon” – the Rolls-Royce of bicycles – starting from Beijing Shifan Daxue, then along the second ring road and by the Lama Temple, past the Forbidden City and through the lanes that intersected the hutongs, to the diplomatic quarter, where I also earned precious US dollars as a researcher for Newsweek correspondents Jim Pringle and Carroll Bogert. (I did get to speak to Katharine Graham by phone once during her visit to China – but that is another story.) Cycle, stop, click, enjoy the scene, chat (my putonghua, though basic, was comprehensible to Beijingers), cycle and repeat. The day started at 6.30am and included a compulsory two-hour rest period after lunch as a consequence of low energy levels from the meagre diet. The whole city was shut down by 6pm. Steam locomotives were a common sight and donkey traps still made their ambling way along Beijing’s main thoroughfare, Jianguomenwai. Even then I knew that I was capturing a fleeting time, soon to be lost.

For me, a picture I call “Datong Boys” expresses a particular moment of liminality. Taken from across the desolate basin of the Shili river directly facing the Yungang Buddhist caves, the boys stand between child and adulthood. China itself in the hot summer of 1986 was at a liminal moment. Deng Xiaoping was firmly in power, and his prime minister Zhao Ziyang began enthusiastically implementing the Open Door Policy to encourage foreign investment. Even the most brutalised Chinese intellectuals believed that their lives would never again be subjected to the sort of chaos seen in Mao Zedong’s Cultural Revolution (1966-76). The future for China could only be up.

But already the transformation of the city was beginning. Some areas appeared as a construction site with no end in sight. “China – it will be nice when it’s finished” was a constant refrain between foreigners.

How To Spend It
The Cause: the photographer teaching refugee children to put joy in the picture 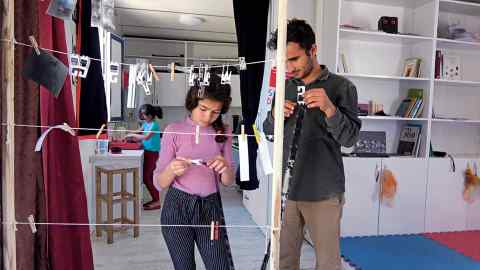 People in Beijing were generous to this blond-haired, tall foreigner with his funny camera and avid interest in ancient sites. But I was also conscious of the claustrophobic nature of Chinese street life. Surveillance in China has always been a fact of everyday life: you cannot escape into anonymity in a country of more than one billion souls.

What I observe today in these pictures but which did not impress me then – the provincial English kid, liberated from the north of England for the first time – was the grinding poverty of Beijing and its surroundings, especially in the mining town of Datong. How wretched must it have been to be reduced to selling hedgehogs on the street for people to eat? And those spring onions and winter cabbages sprawled across the dusty pavements comprised the staple diet for the vast majority of people back then.

But I see also the communication of human warmth, humour and pride. A joy of being alive in the sunshine. And, as evidenced by the young students seen here, an expression of innate elegance in both their attire and demeanour – without the designer brands, foreign travel and newfound wealth that was to come. And I see a longing for the new accompanied by an almost wilful disregard for the antiquities of the past – as evidenced by the discarded marble turtle steles with inscriptions from the emperor, marble bodhisattvas and ancient Taoist tiles that I photographed scattered around the grounds of an old temple.

Pre-Covid at any rate, Beijingers remain warm and welcoming, but has material wealth brought greater happiness? It is not for me to say. But I am delighted that my negatives survived 34 years of neglect more or less intact. I treasure my memories of 1986 and am glad that my younger self thought of preserving something of that time.

Patrick Dransfield’s images will be published in a book, Track of Time, out on 20 January 2021, clearwaycomms.com. He lives in Kowloon with his wife Carmen and still takes pictures with vintage cameras using film. The Seagull camera resides in a cellar in north London, in need of repair