Staying vigilant on safety at work

Britain’s new health and safety chief knows all about managing risk: she used to be a skydiving instructor in her spare time.

It is a reminder that in developed economies, people are as likely to be injured by their hobbies as by their work.

Sarah Albon, who in September became chief executive of the UK’s Health and Safety Executive, which probes incidents at work, is keen to ensure the agency adapts to the workplaces of today — while not forgetting its main task is to protect people in heavy industrial jobs who risk their lives. “We have a really good track record of safety in this country,” she says in her first interview since getting the job, but she warned against complacency.

The UK has got the EU’s second lowest deadly accident rate after Finland with 0.51 data injuries per 100,000 people. The number of deaths annually has been flat for several years at about 140, even as the workforce has grown.

Albon said there were still plenty of industrial workplaces left, such as quarries, open cast mines and chemical plants. “I think the thing for me is about not being complacent,” she said.

“When we start to talk about the different threats that are coming along and the new issues that we might face, such as different ways of working in the gig economy, we need to really think about what the world of work looks like in the future.”

A career civil servant rather than a safety expert, her last job was running the Insolvency Service. The government’s owner of last resort had to wind down and investigate Carillion, a big outsourcer that collapsed in 2018, and keep British Steel trading until a buyer could be found. 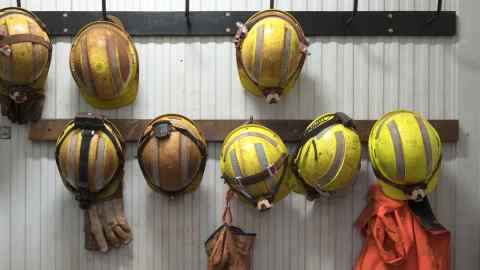 Speaking at the HSE’s office complex in Bootle, a suburb of Liverpool, she said she would retain the three priorities set by the organisation: lung disease, musculoskeletal disorders and work-related stress.

Concern is growing about the harm done by working long hours at a desk in an office. In October researchers unveiled The Work Colleague of the Future report and created a striking dummy to illustrate the damage: she had a hunched back, varicose veins, a flabby stomach and dry, red eyes from hours staring at a screen. The report was written by William Higham, a behavioural futurist, and published by office-equipment maker Fellowes.

Albon said the HSE was trying to educate employers that staff needed to have breaks and changes of posture. “I think it probably is increasingly about those small movements and micromovements and the way people sit.”

But workers themselves also needed to take responsibility. “How many of us actually also play our own part? Part of what the HSE is also about is trying to spread the word and educate people about the longer-term impacts of doing the right thing and wrong thing.”

Stress is a growing problem, and not just that caused by overwork but also lack of control. “It is people feeling that they have no control over what they do, badly managed change, the relationships that they have at work, the office environment itself,” she says.

That is particularly true in the “gig economy”. While internet platforms might treat workers as self-employed, Albon has a warning. “How do we make sure that the law and the enforcement keeps up? It’s quite interesting watching what the courts have started to do, which is, if anything, edge a little bit towards saying: ‘No, that still looks like employment to us.’”

Another growing problem is mental ill-health, which is harder for the HSE to prevent than physical harm. “I think there’s more research to do to really understand how we can support both employers and employees to reduce stress and mental ill health as much as possible.”

Meanwhile, some 12,000 people die from lung disease each year, generally from past exposure at work. Those who worked in coal mines and with asbestos in buildings are particularly affected.

The number of days lost to injury and illness in the UK had been declining steadily until 2008/09, and has been stable since then. In 2017/18, the most recent figures available, there were 30.7m days lost, compared with 37.8m in 2003/4. That represents an average of 1.17 days per worker, down from 1.62. More than half were because of stress, mental illness and anxiety and more than a fifth were due to musculoskeletal disorders.

Albon said the HSE itself was trying to become a better employer. It has encouraged flexible, home and part-time working, as well as holding mindfulness sessions and offering a quiet space where staff can get away from the open-plan office.

She denied that government-imposed cuts since 2010 had reduced the HSE’s effectiveness. Staff numbers have fallen from 3,700 to 2,500 and its government grant from £239m to £135m a year.

In 2017/18 it also raised £18m in commercial income and recovered £79m from its work, including fines. “I think the government of the day has to cut its cloth and we have to work out what to do in proportion to that,” she said. “Honestly I think we have got a decent deal and I think we are getting the resources that we need to do the job we need to do.”

However a Department for Work and Pensions review of the HSE in 2018 concluded that any further savings “may risk compromising outcomes”.

And what of the standards underpinned by the EU after the UK leaves the bloc? Albon is confident they will be maintained for now. “The exact rules will always be up to the government of the day, but this government has committed to keeping the rules at least as good as the European rules,” she says.

The HSE is able to inspect premises unannounced and prosecute companies for breaches. But it also tries to bolster prevention.

It worked with the offshore wind industry to find a safer way of erecting giant turbines at sea. “That’s been made freely available on a non-patented basis across the industry,” she says.

Its next project is working out how to safely decarbonise energy supply. One possibility is to see if hydrogen, which can be extracted from water using renewable electricity, could be safely mixed with natural gas to power existing appliances such as boilers and cookers.

“The way that HSE regulates I think is really seen as a real world-leading way of doing it. Because it’s not all about rules and regulations, it’s about helping employers to make a proportionate risk assessment.”

Fed up by newspaper headlines and pub conversations bemoaning “health and safety gone mad” for ruining people’s fun, the Health and Safety Executive has hit back with a “mythbusters” website.

There are almost 400 ‘myths’ now, all prompted by people calling in. They include the common report that candyfloss can no longer be served on a stick because people could hurt themselves. In fact, it seems sellers simply find it easier to store and serve it in plastic bags so it keeps longer.

The HSE myth panel is sometimes stumped by some submissions. A custard pie fight was cancelled because the event organisers could not get insurance on the basis that it was too dangerous. “It’s hard to imagine what risks would render such harmless fun uninsurable,” the HSE says.

Many cases seem to be companies making excuses for poor customer service. For example, a supermarket delivery driver said he was no longer allowed to carry shopping upstairs for health and safety reasons. In fact, the company simply wanted to speed up deliveries.

And the HSE made clear it will soon be putting up its Christmas decorations — despite past reports that some workplaces have banned them on safety grounds.