Raghuram Rajan’s departure is huge setback for reform in India

The announcement that Raghuram Rajan will leave his position as governor of India’s central bank, the Reserve Bank of India, in September could send tremors through India’s financial markets. Even if immediate reactions are muted, the longer-term effects will be more telling.

When he took the position in September 2013, the rupee was in free fall, the economy was stalled and inflation was in double digits. Mr Rajan proved to be the steadying hand the economy needed. He tackled inflation and strengthened the financial system. His deft stewardship of monetary policy won the confidence of domestic and foreign investors, allowing him to manage the balancing act between controlling inflation and supporting growth. Under his tenure, the RBI has taken important steps to develop financial markets, improve their regulation and broaden access to the banking system.

The clean-up of bank balance sheets is the next key task for the RBI. This will require public funds to recapitalise the banks but also changes to their incentive and governance structures. Damaged bank balance sheets have constrained their ability to lend and support economic activity. Not having a strong central bank governor who understands banking and can stand up to the political pressures — from bankers and those eager to maintain the status quo — could stymie progress.

Mr Rajan’s major virtue, and an unforgivable fault in the eyes of government acolytes, was that he did not sign up to the triumphalist view of India as the fastest-growing major economy. He wisely pointed out its growth was built on shaky foundations and deep-rooted reforms were necessary to shore up the economy. He pointedly questioned whether the benefits of India’s growth were being disproportionately cornered by political and economic elites.

The change at the RBI’s helm exposes India to negative investor sentiment at a time of global economic uncertainty. The country is now in a better position to withstand external turmoil than when Mr Rajan took office. India has a large stock of reserves, has shown that it can cope with exchange rate volatility and needs less foreign financing as its current account deficit has shrunk. But all of this can turn on a dime. A sequence of shocks beyond India’s control, coupled with investor nervousness about the course of economic and financial policies, may stoke capital outflows. 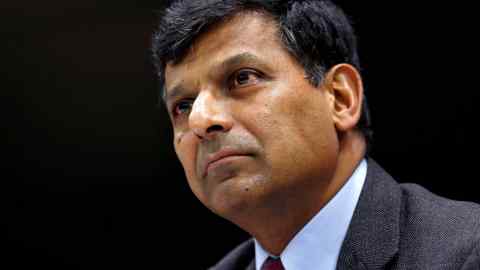 Ad hominem attacks lobbed at Mr Rajan signal that the government is not receptive to messages that focus on harsh economic realities. It is disturbing that independent, analytically based technocratic policymaking that fails to hew closely to the government’s economic and social agenda does not seem welcome.

Another broader issue matters greatly for India’s long-term economic and social development. No individual ought to matter so much to the credibility of an institution or the government’s policies. The concern about Mr Rajan’s impending departure shows the parlous state of India’s public institutions.

The RBI is the only one widely seen as credible and competent and the government’s unwillingness (or inability) to keep Mr Rajan on is a blow to the bank’s perceived independence and to the broader institution-building that India needs. The RBI is a strong and storied institution but Mr Rajan’s untimely departure will leave scars that could end up scarring the Indian economy.