A tale of two bankers — and modern parenting

The FT Weekend Festival last Saturday meant I worked a six-day week, but I have to say the highlight for me — as always — was meeting so many of our readers. We are lucky to be so well supplied with tips and story ideas from our readers — do email money@ft.com if you have one — but there is nothing better than hearing first hand about your experiences of managing money.

I met a lovely couple of 30-somethings who both worked for US investment banks in London, and had two young children. Mr Banker spoke of the “military precision” needed to get the family show on the road in the mornings.

He was a hands-on dad, and once tried to close a deal on the phone from home with his sleeping infant daughter on his shoulder. When the discussion got a bit heated, she woke up and started screaming. There was bemusement on the other end of the line. Mr Banker bravely quipped: “My daughter doesn’t appreciate your negotiation tactics.”

While his employer was prepared to offer parents greater flexibility than a few years ago, to make things work, Mrs Banker needed to go part-time. She asked to work four days a week, and her request was granted. She waved goodbye to 20 per cent of her pay, but was grateful that her salary covered the childcare costs (in the UK, parents who employ a nanny must pay their tax, national insurance and pension contributions from their own post-tax salary).

After she had worked part-time for several years, she also found she had waved goodbye to any hope of a pay rise or promotion. She initially accepted this as a quid pro quo for being able to keep her job, but was increasingly resentful.

She may have been paid for four days’ work, but there was no doubt in her mind that she was working five. Her colleagues saw her flying out of the London office four days a week at 5pm, but they didn’t see her logging on after her children’s bedtime every night to deal with queries from the US team who expected her to pick up. It didn’t take long before this routinely extended into the “fifth day”.

Mrs Banker never said anything, through fear of being branded a moaner. So she gritted her teeth about the part-time pay gap, associated pension contribution gap and, undoubtedly, the bonus gap. But the lack of interest in her future career progression was what really ate away at her. She was busting a gut to stay at the bank and hold on to her job. But would it be worth it?

Recently, she told me, she had requested meetings with managers to discuss this. To accommodate both the US and UK bosses, these meetings were (perhaps conveniently?) arranged at times in the evening that directly clashed with her childcare commitments. She has cheerfully resolved to keep trying. I have deliberately been vague about some details to protect her anonymity. 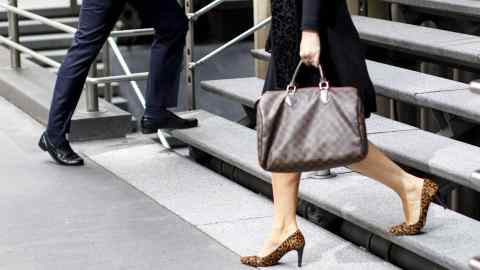 But Mrs Banker won’t have two children under the age of five for much longer. And, trust me, even from our short meeting I could tell this woman was so bright, she could sharpen knives in the crease of her elbow.

My instinct was to say “apply for a job at another bank that will appreciate your obvious talents”! But this is the curse of the part-time worker. Even if you can find the time to network and apply for other jobs, there is the fear that flexible arrangements you’ve fought for won’t be replicated elsewhere.

Mr Banker was incredibly proud of his wife and, if anything, was angrier than she was at the way their male-dominated industry appears to want to remain so. Of his contemporaries at work, he said he was one of the only ones to have a wife who still worked after having two children. This reminded me of my grandmother telling me how upset she was when as a married woman in the 1940s she had to give up the job she loved.

Considering the cost of childcare in London, taking a break from a professional career for a few years while raising young children may not cost you much in financial terms. But being out of the game will undoubtedly cost you in terms of career progression.

This is a financial equation that parents everywhere have to consider. There is no right or wrong answer — and Mr and Mrs Banker are lucky to have the advantage of good salaries and a strong partnership. The financial waters are much harder for less well-paid, divorced or single parents to navigate.

While gender pay gap reporting has made companies more aware of the issues, I would urge any bosses reading this column to think about how they treat their loyal and hard-working part-time staff.

The annual TUC conference this week optimistically proposed that the productivity boost from technology, robotics and AI would mean that in future we’d be able to work a four-day week for five days’ pay. But a much bigger issue is the raw deal that many part-time workers — particularly professional women — are getting. Mrs Banker will stay and fight her battle and thank goodness for her profession that she chooses to do so. But if we want to boost diversity at higher levels, we should not be relying on goodwill.