Spain’s new prime minister Pedro Sánchez has promised to raise tax on companies and increase public spending in a speech to parliament laying out his socialist government’s two-year economic plan.

Mr Sánchez said he would “redesign” corporate tax to close loopholes so that the effective rate paid by companies could not be less than 15 per cent, while slowing the pace of deficit reduction so his government could spend more.

The 46-year-old prime minister ended the rule of conservative Mariano Rajoy last month after winning a confidence vote. Mr Sánchez’s Socialist party holds just 84 seats in the 350-seat parliament but he has said this will not stop him attempting to shift economic policy.

Spain’s economy has been growing at a robust rate of more than 3 per cent a year since 2015, rebounding after a dire financial crisis. With the budget deficit shrinking, Mr Sánchez is betting that there there is scope for more public spending.

“Spain’s economy grows, but does not redistribute,” he said, confirming that with extra spending the deficit was expected to reach 2.7 per cent of gross domestic product this year, compared with the last government’s estimate of 2.2 per cent.

The government has promised a pay increase for civil servants and to allow more spending by Spain’s 17 regions. It has also made a commitment to increase defence spending in response on Nato members to pressure from US president Donald Trump.

“They are coherent objectives with the economic evolution of our country. And coherent with social needs,” Mr Sánchez said.

Spain’s debt-to-GDP ratio is 98 per cent, higher than the EU average. The country is also the last subject to the EU’s so-called “excessive deficit procedure”. However Nadia Calviño, the country’s new economy minister, has said that even with a slower pace of deficit reduction Spain is on track to meet EU budget targets. Market reaction to plans for a slower rate of deficit reduction has been muted.

Mr Sánchez also said his government would seek to “redesign corporate tax . . . so that the effective rate of large corporations is close to the headline rate [of 25 per cent] and in no case less than 15 per cent”.

The government will also propose a bill to help fight tax fraud, which will include measures to ban tax amnesties.

One of Mr Sánchez’s first acts last month was to appoint the country’s first mostly female cabinet, while he struck a progressive tone by allowing entry to a boat carrying migrants rejected by Italy.

Last week he met the leader of the Catalan government, Joaquim Torra, marking a step-change in relations between Madrid and Catalonia after the region’s push for independence. 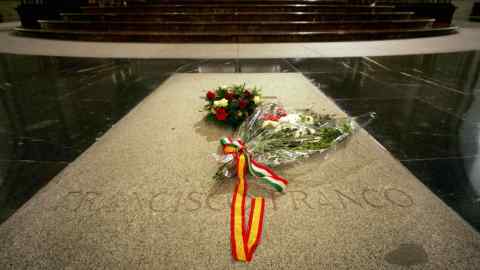 The prime minister has also pledged to removing the remains of Spanish dictator Francisco Franco from the Valley of the Fallen, a monument to those killed during the Spanish Civil War.

“No democracy can allow a monument to a dictatorship,” he said on Tuesday. “We will proceed with the exhumation of the remains of the dictator Franco from the Valley of the Fallen, and this will happen shortly.”

Antonio Roldán, the economic spokesman in parliament for the liberal Ciudadanos party, wrote on Twitter during the speech: “I have not yet heard a single reform to address the three major bottlenecks to the country’s progress: employment, education and institutions. You cannot live by gestures forever.”