The UK has shed almost 750,000 jobs since the start of the coronavirus lockdown, and more than a quarter of the workforce was still temporarily away from work as the economy began to reopen in June, official data showed on Tuesday.

The number of employees on UK payrolls was 730,000 lower in July than in March, a 2.5 per cent fall that was largely caused by companies freezing hiring, according to Office for National Statistics figures based on tax data.

Much larger numbers of workers are now at risk of falling into unemployment as the government gradually winds down its job retention scheme introduced at the start of the Covid-19 crisis.

Jonathan Athow, deputy national statistician at the ONS, said up to 5m employees looked to be still on the furlough scheme in June, with young and old workers, and those in lower skilled jobs, most likely to be among them. In addition, about 300,000 employees had told the ONS that they were temporarily off work while receiving no pay.

“A real concern is that this is just the first wave of bad news for the jobs market,” said Gerwyn Davies, economist at the CIPD organisation for human resources professionals. Ruth Gregory, at the consultancy Capital Economics, said: “This is just the lull before the storm”.

Despite the huge shock to the labour market unleashed by the pandemic, the headline measures of employment and unemployment are virtually unchanged since March, because of the wide coverage of the furlough scheme, and also because many who have lost jobs have not been actively seeking work.

Rishi Sunak, the chancellor, said the figures “make it clear that our unprecedented support measures . . . are working to safeguard millions of jobs and livelihoods”.

The number of people claiming out-of-work benefits continued to rise in July, reaching 2.7m — 7.5 per cent of the workforce, and more than double the pre-pandemic level. However, this number includes some people still working on low pay, among other things.

Although redundancies rose in the second quarter, they are still below the levels seen after the 2008 financial crisis.

But many companies have set out plans for redundancies since the beginning of July, ahead of the start of the tapering of the job retention scheme. From this month employers have had to contribute to the cost of furloughed workers and the scheme is set to end in October.

Although hiring picked up between June and July, as pubs and restaurants reopened, the ONS said the number of vacancies remained 45 per cent lower than a year earlier — leaving more people chasing each job.

Evidence of mounting job losses has piled pressure on ministers and other policymakers to do more to prevent mass unemployment.

Dave Ramsden, the Bank of England’s deputy governor, told the Times this week the central bank would step up its asset purchase programme if needed to support the recovery, adding that a big factor in the monetary policy committee’s decisions would be how far unemployment rose.

“Unemployment peaks [in the BoE’s forecast] at 7.5 per cent but the risks are that it will be higher than that,” he said.

However, Mr Sunak has so far resisted pressure from political opponents and business leaders to extend the furlough scheme beyond the end of October, at least for parts of the economy that were still fully or partly shut because of Covid-19. 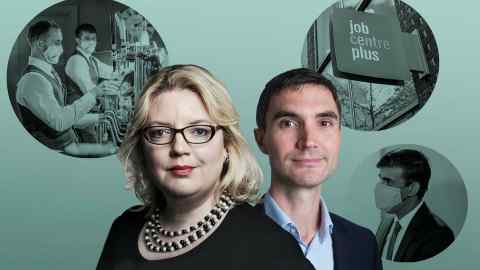 Mr Sunak's allies insisted the chancellor was not planning a furlough extension behind-the-scenes. “We are looking to make sure people can find their way into new jobs, if necessary,” said one.

But Treasury veterans believe he may be forced to change his mind. Alistair Darling, Labour chancellor during the financial crash of 2008, said: “He has to do something about it.

“It's all very well to say that people need to ‘Move on’ if you're not the person moving on. For many people they will be moving straight on to the dole queue.”

Mr Sunak is adamant that the government's focus now is on training, skills and promoting new jobs.

“I’ve always been clear that we can’t protect every job, but . . . we have a clear plan to protect, support and create jobs to ensure that nobody is left without hope,” he said on Tuesday.

But even if the furlough scheme ends as planned in October, the pressure for more government measures to support jobs in the autumn will be intense.

Jonathan Reynolds, shadow work and pensions secretary, said Labour backed a targeted extension of the furlough scheme for the most vulnerable industries.

“These figures confirm what we feared — Britain is in the midst of a jobs crisis,” he added.

Business groups are calling for targeted cuts in employers’ national insurance contributions to boost hiring — a step that the Treasury is likely to resist, because it could channel large sums of money to support job creation that would have happened anyway.

Neil Carberry, chair of the Recruitment & Employment Confederation, a trade body, said the government needed to “act with urgency” to ensure schemes to help the newly unemployed retrain and find jobs were up and running in the autumn.