Hermit kingdom’s purchasing power may be more resilient than assumed

Until recently Donald Trump was claiming his strategy on North Korea was working, and that Beijing was stepping up the pressure on Pyongyang to convince it to ditch its weapons programmes. But last week he took a closer look at Chinese data and did not like what he saw.

“Trade between China and North Korea grew almost 40 per cent in the first quarter,” the US president tweeted. “So much for China working with us — but we had to give it a try!”

The dismay may be new but the data are not. Mr Trump was quoting a growth figure announced in April by the China Customs Administration which, along with subsequent monthly figures, shows Chinese measures are having less effect than Washington had hoped.

In February Beijing announced a ban on North Korean coal imports after the assassination in Malaysia of the older brother of Kim Jong Un, who had been living under Chinese protection. Data from the first quarter would only show a partial impact from that ban.

Data to May shows the ban appears to have had little immediate impact on North Korea’s ability to buy Chinese goods— a sign the hermit kingdom’s purchasing power may be more resilient than many external analysts believe.

In terms of overall trade, China’s monthly imports from North Korea clearly show the impact of the coal import ban. Coal accounted for about 40 per cent of North Korea’s total exports before this year, according to the UN, earning the country an average of $94m per month since early 2015.

But despite expectations that the move would reduce Pyongyang’s purchasing power, the value of Chinese exports to North Korea stayed strong in April and May. Shipments in February, when both countries celebrate the Lunar New Year, are usually lower than other months.

Stronger exports from China to North Korea in January (before the cut-off in coal shipments) largely account for growth in first-quarter trade. Published customs data show growth in renminbi terms in the first three months of the year was only 8 per cent. The customs administration said the 40 per cent quarterly growth figure reflects revisions in the prices of bulk commodities after the data were published.

What is more noteworthy — and probably more uncomfortable for the White House — is that China’s April and May exports to North Korea stayed strong, too.

There are always questions around data when it is so politically charged. For instance, Chinese customs figures show that no coal has been imported from North Korea since February. However, China turned away North Korean ships in April, raising the question of whether other vessels succeeded in continuing a clandestine coal trade that would not appear in official customs data. 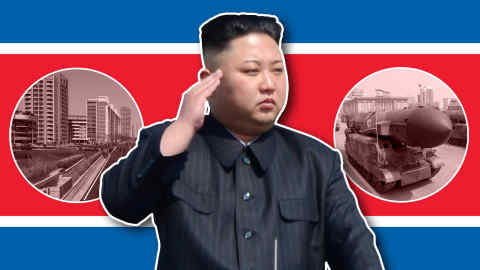 It is also possible that North Korea continued to ship coal elsewhere, including Russia, and used the cash earned to continue to buy goods from the Chinese.

Any analysis of North Korea’s domestic economy or of its true trade with China is partially a guessing game, because some data simply drop off. For instance, crude shipments have not been reported since 2013.

So what do we know about North Korean trade with China?

Its top imports are oil and oil products, as well as coke for its steel mills. Years of data show that shipments of coke, iron ore and steel between the two countries closely match satellite images of activity at decrepit steel complexes that are at the centre of Pyongyang’s juche, or self-reliance, policy. 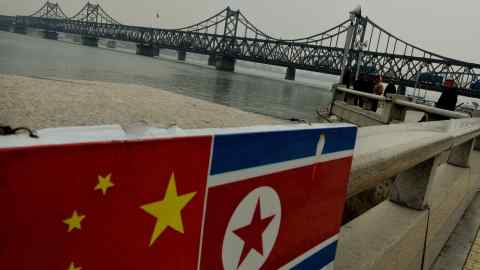 A Chinese trader interviewed in Dandong, the border city that handles most trade with North Korea, told the Financial Times he carefully checked “shopping lists” from North Korean buyers against a 236-page Chinese translation of items sanctioned by the UN. One such list, reviewed by the FT, includes a number of petrochemical components that have been regularly imported since at least 2009. Many are ingredients used in fertiliser (meaning they can also be used as explosives) or in motor fuel blending.

But even given the gaps in the data, trade patterns give a peek into the health of the North Korean economy. For instance, China consistently exported about 50,000 tonnes of crude oil a month from 2006 to 2009. That dropped to roughly 44,000 tonnes a month from 2010 to 2012 before rebounding to previous levels in 2013. After that, China stopped publishing data on its crude exports to its neighbour.

Fuel exports to North Korea give another clue. Monthly shipments were consistent at just under 5,900 tonnes a month until the beginning of 2011. That year, North Korea appears to have liberalised the import trade because monthly imports began to fluctuate a lot. Fuel imports rose sharply in 2012 but then dipped again from 2012 to 2014.

The drop could reflect the global collapse in coal prices that devastated the neighbouring resource-dependent economies of northern China and Mongolia — it is possible lower earnings from coal also hit North Korea’s domestic economy.

If fuel shipments are down and revenues from coal exports are curtailed, what has kept the value of Chinese exports to North Korea afloat for the past few months? According to Chinese customs data, shipments of cars, cooking oil, boat engines, oranges and tomatoes are all up.

Get alerts on North Korea when a new story is published