George Osborne always was a gambler. He was shadow chancellor for five years after 2005, and then chancellor for six. Most of his wagers paid off, but the biggest — staking his future on the outcome of a referendum he did not want but thought he could win — was a bet too far.

To the surprise and shock of many, the chancellor did not resign after David Cameron, preferring to lie low at first and then appear relevant to Britain’s future outside the EU, proposing corporate tax cuts, a looser fiscal stance and a push for closer ties to the US and Asia.

But Theresa May was quick to signal her opinion of Mr Osborne’s economic stewardship. In a damning speech in Birmingham, she said it was “apparent to anybody who is in touch with the real world” that the public did not feel the economy was working “for everyone”.

Britain’s future is likely to be very different under a new chancellor, and Mr Osborne’s aides suggested he was unsure about remaining in a cabinet destined to take Britain on a path he had described as “economically illiterate”.

Mr Cameron’s legacy will be his doomed decision to call a referendum on the EU. While this failure will hang round Mr Osborne’s neck too, he will also be remembered as a chancellor who, inheriting a UK economy only just emerging from the global financial crisis, applied further spending cuts and sought to balance the books quickly.

He was a reformer, bringing important institutional changes to the regulation of banks, greater power for the Bank of England, greater freedom for pensions and independence for economic forecasting.

Mr Osborne will leave the Treasury’s imposing building on Horse Guards Road with the UK economy — and its traditional strengths and weaknesses — intact. A flexible labour market has ensured a record employment rate and unemployment down to 5 per cent.

Growth since 2010 has been roughly the same as in the US and better than the eurozone, but productivity — output per hour worked — has stagnated, leaving the public-sector deficit a long way from normality, even with unemployment back to pre-crisis levels.

Mr Osborne’s most controversial decision as chancellor was his first: setting out a five-year plan to eliminate the gaping budget deficit inherited in 2010. Austerity in the form of tax rises and grinding spending cuts were central to the coalition government between the Tories and the Liberal Democrats, with whom he had close ties in the Treasury.

The policy soon ran into trouble. For two years Mr Osborne suffered taunts as the chancellor who generated the slowest recovery in a century. He was criticised abroad by the Nobel laureate Paul Krugman for “banging his head against a brick wall” and by the International Monetary Fund as “playing with fire”.

As the opprobrium reached a climax in 2013, the economy started growing again and growing rapidly — faster than any economist had expected. Informed observers are still arguing over the merit of his deficit-reduction plans. 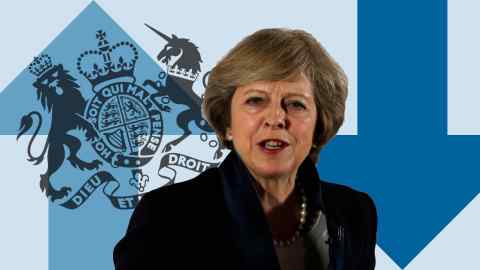 One fierce critic, Jonathan Portes of the National Institute of Economic and Social Research, said Mr Osborne “unnecessarily prolonged downturn and [left] some permanent damage”. The recovery, he said, had come when Mr Osborne “wisely decided against doubling down on this error and executed a partial U-turn”.

But the Treasury and Mr Osborne’s allies reject this thesis and have said no policies changed. Rupert Harrison, the chancellor’s main adviser between 2010 and 2015, said the “rhetoric of cuts was always worse than the reality in order to gain public support”.

The problem, according to George Buckley of Deutsche Bank, is that the repair job is still not finished. The deficit “proved more difficult to budge than he bargained for and while it is less than half its post-crisis level he leaves the Treasury with austerity a work-in-progress”, he said.

That the fiscal rules have been abandoned leaves his successor a hard task. Even with the abandonment of 2020 surplus target, spending cuts are still on the agenda because another of Mr Osborne’s creations, the Office for Budget Responsibility, will produce public finance forecasts this autumn that are unlikely to suggest much money to spare.

Since 2010 the OBR has persistently said public finances are in a worse long-term position than it had bargained for, cutting its estimates of sustainable growth in the economy.

Despite the bad news, the creation of the OBR has been almost universally praised. Mr Portes called it “by far [Mr Osborne’s] most positive achievement”. Others cited the reforms of banking regulation — bringing bank supervision back to the BoE — and creating a regulator of conduct in financial services.

Mr Osborne will get few credits for being a coherent tax reformer. Despite welcomed changes such as reforms to stamp duty and cuts to corporation tax, Paul Johnson, director of the Institute for Fiscal Studies, accused him of introducing “a new set of complexities and inefficiencies” such that the 1980s dream of “a simple and coherent system [has] been lost”.

In pensions the chancellor’s mark will be one of radical reform and simplification. Pension tax relief will continue, but he swept away the requirement to buy an annuity with retirement savings, providing much greater freedom in saving.

Nothing so dramatic was performed in infrastructure, housing, manufacturing or the balance of growth in the UK.

The claim by Mr Osborne and his aides that he had cut the budget deficit without the public squealing too much is undermined by the overwhelming vote for Brexit from parts of Britain that felt left behind. So the chancellor will be remembered for his final gamble as much as his other work. According to friends, he always thought the idea of a referendum on the EU was “nuts”.

Mr Osborne may go down in history as a man who believed Britain would be far better off inside the EU than out. Once the electorate rejected his blood-curdling warnings of the consequences of Brexit, he had to go. Any vindication in the form of a severe economic reaction to the country’s departure from the EU would be scant consolation.

Mr Osborne leaves an economy that recovered from the crisis, employment at a record level, but his successor will also inherit huge uncertainty over Britain’s position in the world and a stubborn productivity crisis that suggests the next few years will test the resolve of the next incumbent of Number 11.