Sign up to myFT Daily Digest to be the first to know about Retail & Consumer industry news.

With its hybrid engine containing a 6.2-litre, V12 petrol engine and an electric KERS motor, Ferrari’s £1m F150 “La Ferrari” supercar has 950 horsepower and a top speed of 217mph. It also wails like a banshee and draws crowds wherever it goes — and the fact that just 499 will be produced ensures that every buyer gains access to an elite club.

But when it comes to demonstrating membership, what is a La Ferrari owner to do when their pride and joy is away, being expensively serviced, or simply tucked-up in the upmarket garage? One answer might be to spend a third of the car’s value on a wristwatch to go with it.

No sooner had the wraps been pulled off the F150 at the 2013 Geneva Motor Show than Hublot, official watch partner of the marque, unveiled its counterpart: the MP-05 La Ferrari wristwatch, designed to resemble the car’s transparent engine cover.

That original model, limited to 20 examples costing £225,000, is now followed by a version being launched at Baselworld, which takes the idea of showing off the “engine” of one’s watch even further: it has an entirely see-through case made from seven parts, each machined from a solid block of sapphire crystal.

Said to have taken 600 hours to develop, the case weighs more than 53 grams and allows an almost unhindered view of the 637-part tourbillon movement, which features no fewer than 11 spring barrels. These form a “spine” running through the centre of the watch and enable it to run autonomously for 50 days once fully charged with a special, electric winder. The idea is to represent the power of La Ferrari’s engine in clockwork form.

The see-through theme is echoed in the hour, minute and second displays that take the form of revolving, transparent cylinders. Indeed, even the watch strap is transparent and is secured to the wrist by a buckle made from polished sapphire crystal and titanium. 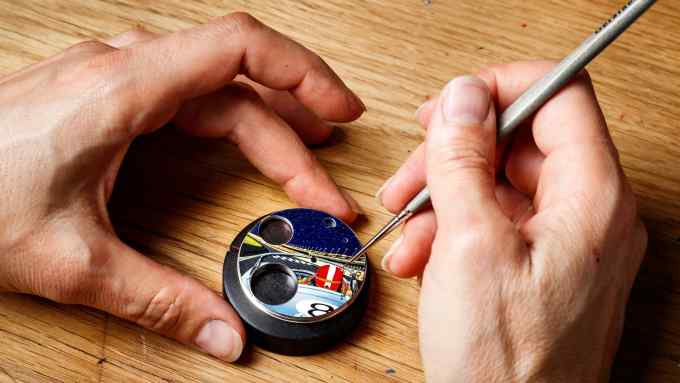