Accessibility helpSkip to navigationSkip to contentSkip to footer
UK manufacturing

In the small town of Barnoldswick in northern England the Conservative government’s election-winning promises have had a painful collision with economic reality.

Hundreds of workers at the Rolls-Royce jet engine plant, which has sustained the Lancashire town since 1943, have been told their high paid, skilled jobs are moving to Singapore, the only place the group makes its titanium wide-chord fan blades outside the UK.

Boris Johnson’s government won dozens of northern seats from Labour by pledging to “level up” prosperity across the UK and narrow the north/south divide. But Barnoldswick faces rising unemployment and its knock-on effects because Rolls-Royce, an aerospace giant, is restructuring after the coronavirus pandemic grounded aircraft.

Catherine Graves, a Rolls worker, said: “I am third generation on my mum’s side, fourth on my dad’s. It [Rolls] means a hell of a lot to the town. I am the main breadwinner in my house. If we don’t have the jobs we don’t have money to spend. I would stop using child care, the takeaways, the shops.”

Ms Graves, 34, was bringing soup to support colleagues on the picket line. They began a strike on November 6 that will end on Christmas Eve, after Rolls announced plans to shut one of two plants in the town.

Unite, the union, claims 350 jobs could go. Rolls says it will be 300. That includes 140 jobs transferred to ITP Aero, a Spanish subsidiary that is more “cost competitive”.

Rolls hopes subsequently to sell ITP as it attempts a £1.3bn cost cutting programme imposed by the dramatic drop in flying during the pandemic.

That would leave around 200 workers in the town. Pre-Covid there were 740.

Unite’s intention was to strike in small groups and keep the factories open. But when it called out the electricians, Rolls said it would have to bring forward the annual Christmas shutdown for health and safety reasons.

Rolls has moved the work temporarily to its operations in Singapore, Spain and Japan.

Barnoldswick may be small but in the aviation industry it is a grand cru. Frank Whittle built the first turbojet engine there and many Rolls engines carry the RB moniker, for Rolls Barnoldswick.

Its location is an accident of history: the company needed somewhere German bombers would not find. The town of 11,000 is far from motorways and has no railway station.

David Whipp, deputy leader of Pendle council, which Labour runs in coalition with the Liberal Democrats, said his aunt was Mr Whittle’s secretary. “The roots of Rolls-Royce and the roots of our current prosperity are very much intertwined. It is the dynamo of the local economy,” said the Lib Dem councillor, citing a report from 2018 that showed the company pumped £1bn annually into the Lancashire economy.

A quick trip to Barlic Bites in the town square confirms that. All three staff, and everyone in the queue, has a relative working at Rolls.

“My brother and my dad work there,” said Laura Parnell, 32, as she spread tuna on a baguette. “If there is no work people are not going to go out. Shops are going to close.”

Apart from with other embattled aerospace suppliers located in and around Barnoldswick, and bike maker Hope, there are few prospects for the unemployed.

The bitter irony for Barnoldswick workers is that they travelled to Singapore in 2012 to pass on their skills in making fan blades. Dave Rodwell, 49, recalls that trip while seated in a marquee the strikers use to escape from the rain and make coffee and bacon butties. “I am so disappointed. They are using Covid as an excuse,” he said.

He contrasts the UK government attitude with that in Singapore. The state has wooed investors to a huge aerospace park. “This is British technology. Why are we allowing it to be taken away?”

Rolls said it had no plans to shut the second factory. But it is shifting manufacture of fan blades for newer engines to Singapore, while leaving older blades, plus design and maintenance work, at Barnoldswick.

It said it had cut several hundred jobs in Singapore and moved work to the UK to preserve domestic jobs. There is a glimmer of hope as the union presented an alternative cost-cutting plan aimed at keeping the plant open.

But Miranda Barker, chief executive of East Lancashire Chamber of Commerce, warned that the UK’s civil aerospace industry is on the verge of collapse.

She said the government had to step in to preserve jobs until people were flying again. “The UK is a world leader. We need to save the supply chain.”

Lancashire has one of the world’s largest aerospace clusters with 17,000 well paid jobs and £5bn turnover in its top 20 companies alone, which also include BAE Systems. More than half are in military programmes such as BAE’s fighter jets and reasonably safe. But Ms Barker says hundreds of jobs in civil aerospace have gone and almost 2,000 are vulnerable.

Businesses, the unions and residents are pressing Andrew Stephenson, Conservative MP for Pendle, to get the government to intervene. He has lobbied hard with little effect.

Mr Stephenson said: “There is a deliberate offshoring of jobs. These are by far the best jobs in the area. 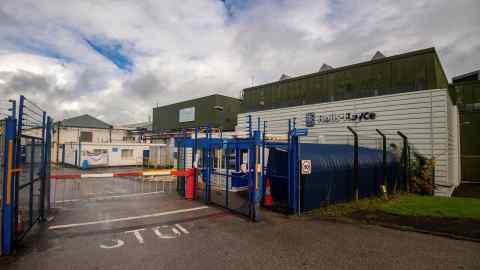 “Rolls-Royce have been given so much support by the UK government. Where is our payback?”

Leo Platt, 29, one of the pickets, said he had contacted Mr Stephenson several times. “He’s good at asking questions but he doesn’t get answers. I have voted for him before but I won’t again if he doesn’t save my job,” he said.