If you think the same, join us
How To Spend It Design

Rose Uniacke: at home with the queen of serene

Rose Uniacke recalls her first encounter with her London home with an affection that borders on tenderness. “I thought about it a great deal after I saw it,” says the British architectural interior designer. “The rooms had so much beauty and an energy of artistic endeavour. It had clearly enjoyed a wonderful life.”

Built in 1860 as the home, studio and picture gallery of the Scottish society portraitist James Rannie Swinton, the house was marked out from its stucco neighbours both by its brick façade and its irresistible bohemian history. It later belonged to the engraver Iain Macnab before becoming a school for modern art in 1925. By the time Uniacke laid eyes on it, it had fallen into severe disrepair. It had been bombed during the second world war and its latest incarnation was a soulless exhibition space, while a series of flats had been installed in the basement. Aside from the original fireplaces, it had been stripped of much of its refinement. Yet its effect on Uniacke lingered. Three years after her initial viewing, she succumbed to its charms.

“It had been institutionalised and so much had been lost, but I knew we could find its flow again and return it to its former glory,” she says. So began the colossal task of transforming Swinton’s derelict mansion into a stylish family home. Working in collaboration with the Belgian architect Vincent Van Duysen, the first move was to peel the space back to its architectural skeleton before beginning the research-led process of reinstating and restoring its historic details, from friezes to cornices and mouldings.

Uniacke’s approach is defined by its forensic quality. “Even though there was no client to convince, the thinking behind this project was an important part of the process. I was looking for a house I could live in very freely. I had a lot of children, so life needed to be easy but with a sense of elegance and welcome,” says the designer, who shares her home with her husband, film producer David Heyman, and their son Harper, the youngest of Uniacke’s five children.

There were moments of revelation too. A discussion with Van Duysen led to the landscape designer Tom Stuart-Smith being commissioned to transform Swinton’s Victorian picture gallery into a winter garden. Though its domed glass roof had been damaged during a wartime air raid, when they began to dismantle the boxy white ’70s structure that had replaced it they discovered the original rafters beneath. “It was so spectacular,” says Uniacke. “It was immediately clear to me that it should remain a completely raw space.” Today, the carefully hand-cleaned rafters frame a wealth of plant life and statuary, which, together with a late 19th-century marble fountain, lend a lavish, palazzo feel.

Completed in 2012, this meticulously executed restoration has laid the foundation for an influential aesthetic that is at once serene and refined, and captured perfectly in a new book, Rose Uniacke At Home. The designer’s home has been fundamental in setting the tone for the trio of roles she inhabits today. Foremost, as a renowned architectural interior designer whose international portfolio includes the Marylebone headquarters of Jo Malone, the lavish railway dining cars of The Royal Scotsman and the homes of the Beckhams and the Marquess of Bute, but also as an antiques dealer whose pared-back presentation makes the old feel new. She’s the creator of a burgeoning collection of furniture and home accessories, too. Rose Uniacke Editions spans everything from playing cards to totes to sofas – many of which started life in her London home.

Does it irritate her when clients want her to replicate her own rooms ad infinitum? “When people ask me to recreate my house, they’re really asking for something that feels comfortable and that won’t go out of date,” she says. “Besides, every project is different. Things reveal themselves to you as you go along. I do lots of planning but I don’t like to be stuck in my thinking. There should be space for change.”

Luxury is a need answered with minimal fuss

Not that there was ever any kind of game plan. “It’s been a very organic process,” says Uniacke of the evolution of her business and the run of studio projects that she oversees with 13 of her staff and a typical roster of eight projects at any one time. Each spans from two to three years and requires a schedule that runs like clockwork. “I like routine,” she says. “But there’s always lots of variety to the day.”

Born out of Uniacke’s own needs and desires, the retail side of the operation now makes up half of the business – and it’s growing fast. “Prior to Covid-19, we were seeing strong growth, with sales increasing 20 per cent year on year, but are currently seeing sales up 70 per cent on last year,” she says. Often if she can’t find the right design, she will create it. Luxury in these terms is a need answered with minimal fuss.

In September, Uniacke will open her second showroom, The Rose Uniacke Fabric Shop. Dedicated to her love of textiles – the first product she ever created was a large cashmere blanket – it sits across the Pimlico Road from the showroom and newly expanded studio she established in 2010. The shop’s long, lean, light-filled interior – complete with a curvaceous stairwell shipped in from Belgium – will be home to a wealth of textiles, bed and table linens, showcased on her own upholstered furniture. Uniacke’s vision of a seamless shopping experience is far removed from the jostle of regular retail. Shoppers will peruse a corridor of cashmere, linen and corduroy, with rows of textile samples on simple hooks. Draper’s tables will allow fabrics to be experimented with in a way that mimics the designer’s own sample room. “I like to show things in a generous way,” Uniacke says. “It’s about being able to see them properly and for there to be a serenity around the experience.”

As well as demarcating the different aspects of the business, the new store is a chance to crystallise its environmental ethos. Working with small mills and using ethically sourced materials where possible, the focus is on minimising environmental impact. Among the 52 textiles recently added to the line, there are outdoor upholstery weaves produced using recycled plastic, small-batch organic linens and hand-loomed Indian Peace Silks, produced with a social enterprise that allows silk worms to complete their life cycle before harvesting. Many of the offcuts from her interiors projects are now being transformed into luxurious rag-rug-style cushion covers and wall hangings by a Bristol weaver. The store will also house – and be daubed in – Uniacke’s debut line of lime-based, natural paints. It’s produced by the Norfolk company Graphenstone, chosen for its eco credentials. “Remarkably, one paint actually absorbs CO2 from the room,” she says.

How to create your future home
Lost in headspace: the rise of the home temple 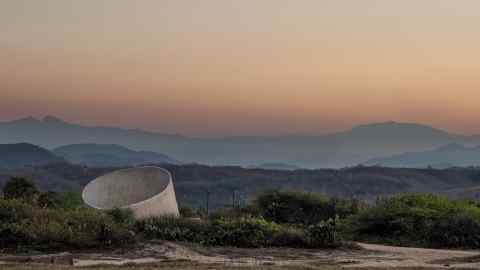 In the world of Uniacke, everything is as purposeful as it is pleasing. For her, great design is felt as much as seen. “Whether it’s a house, a room or a shop, it should make you feel good. My role is to ensure there’s harmony and an ease of living that makes you want to spend time there,” she says. “And I feel like I’m just getting started.”