Too cold to live in: how families in Macedonia are rebuilding their homes

In a ground-floor apartment of a large block on the outskirts of Skopje, three-year-old Derin Bajram is pushing his red plastic fire engine across the floor. His parents Svetlana and Ertan smile as they watch him. Only two years ago, they explain, their apartment was not a place a child could play in — it was freezing cold.

“Before Derin, we could come back late, or stay out when the apartment was cold,” said Ms Bajram, who works at a publishing house. But now, she and her husband, a dental assistant, are at home much more frequently.

The Bajrams’ apartment building was “retrofitted” in 2016 with the help of the international housing charity Habitat for Humanity, the FT’s Seasonal Appeal partner. Habitat Macedonia helped the complex’s residents in enveloping their building with styrofoam, covering it with a façade and installing a new roof. The changes, Ms Bajram said, had not only made their apartment almost airtight, they had saved the family a lot of money on heating bills.

In Macedonia, up to half of a typical family’s income is wasted on energy costs, which can be so high that in winter poor families commonly relegate themselves to one room of an apartment. The poorest burn scavenged or recycled wood, which is often treated with chemicals that produce noxious fumes. The high cost of heating has kept many young people from being able to move out of their parents’ homes and into their own, said Liljana Alceva, the deputy director of Habitat Macedonia.

Many young people simply choose to leave the country. International organisations estimate that roughly 20 to 30 per cent of the population (about 450,000-600,000 Macedonians) have emigrated in the past two decades in search of jobs and higher living standards. With 28 per cent of the population unemployed, and 20 per cent living in poverty, many of the Macedonians who remain struggle to pay their bills. Heating costs can amount to as much as half the average monthly salary in Macedonia.

Since 2009, Habitat has provided help to make 60 buildings — with a total of 1,900 apartments — more energy efficient. The organisation estimates this can save families up to 40 per cent on heating costs. The Bajrams said their bills were about 20 per cent lower than before the retrofit. Now they can make ends meet — and the air they breathe at home is also cleaner than that of most Macedonians.

Skopje was named Europe’s most polluted capital in 2018 by the World Health Organization, partly because two-thirds of households use firewood as their primary source of heating. Its particle-pollution rates can register more than 10 times higher than EU air quality standards, and the WHO estimates this kills 2,574 people prematurely every year. The small-particle matter can penetrate the lungs and cause heart and lung disease, as well as other chronic conditions.

According to Habitat estimates, about 80 per cent of the country’s housing stock was created before Macedonia became independent from Yugoslavia in 1991, most of it after the second world war. During the Yugoslav era, the state organised bodies for maintaining and improving housing blocks, but these organisations collapsed after independence. Less than one-third of Macedonians live in buildings with thermal insulation.

“These buildings are built of concrete blocks with holes in them, like Lego bricks,” said Darko Blazevski, who leads his building’s homeowners’ association and oversaw the process to retrofit his building, in a leafy suburb of Skopje. “Every year, mould would appear on the walls, and we always needed to use extra electric heaters,” he said.

Since the building was insulated last year, Mr Blazevski said his family hadn’t needed to use air conditioning in the summer or added heating during the winter. He said he was also proud because the value of the building had gone up. Habitat helps residents take out low-interest loans to pay the fees for retrofitting in instalments. According to the charity, retrofitting multi-apartment blocks has an investment potential of €500m.

Average percentage of the average monthly salary of €350 that Macedonians spend on energy for their homes, according to Macedonia’s State Statistical Office

Estimated number of people who live in illegally constructed buildings, some 15 per cent of the population of Macedonia

The Velev family live in an apartment built by Habitat as part of a new neighbourhood of Veles, in central Macedonia. Previously they had lived in a 19th-century building. “The walls were so wet. It was not an appropriate place for living, definitely not for raising children,” said family patriarch Dimce Velev, over lemonade and cookies in his dining room. His two children, Nikola, now 19, and Gabriela, 18, had chronic bronchitis and regularly came down with pneumonia.

With an investment that was not much more than they would have needed to repair their dilapidated old home — plus 400 hours of “sweat equity”, or work on the construction site — the Velevs eventually moved into their new apartment in 2012.

In the past 10 years, Habitat has built six complexes in Veles that house 36 families in total, and another three are in the works. It is easy for everyone to pitch in, because the buildings are made of lightweight concrete blocks that can be cut with a hand saw and don’t require mortar. The bricks are full of tiny air bubbles, which yield well-insulated structures, resulting in crucial savings for families.

Mr Velev remembers struggling to pay about €200 per month — the equivalent of a month’s salary for a textile or shop worker in Veles — just to heat his house. Now he pays only a quarter of that.

Habitat Macedonia also works with the Roma community, helping to get homes built without permits registered with the government. About 310,000 people (roughly 15 per cent of the country’s population) live in illegally constructed buildings, said Ms Alceva of Habitat Macedonia. Many of these homes are in Suto Orizari, the largest Roma-run municipality in Europe.

In collaboration with Horizonti, a micro-credit organisation, Habitat provides guidance and loans for low-income families who need renovations. In the past 11 years, Horizonti has provided 1,900 loans for home improvement, more than 90 per cent of which are provided to women.

More secure homes, in tandem with improvements to the education system, mean students are healthier and can study better, which is reflected at state level.

Macedonia’s development stagnated during the decade-long rule of nationalist prime minister Nikola Gruevski, which the European Commission said had been marred by corruption and “constant” challenges to democracy and rule of law. A new Social Democrat-led government came to power last year vowing to improve governance and strengthen ties with its neighbours.

A deal signed with Greece in June could enable Macedonia to join Nato in 2020 and progress towards EU membership, drawing increased foreign investments and giving young Macedonians a reason not to emigrate.

• Your gift will be doubled
If you donate to Habitat for Humanity through the FT’s Seasonal Appeal, the Hilti Foundation, a charitable organisation, has generously agreed to match your gift. Click here to donate now.

READ MOREFT Appeal for Habitat for Humanity
A fixed abode: How US retirees are helping Cambodia’s poor 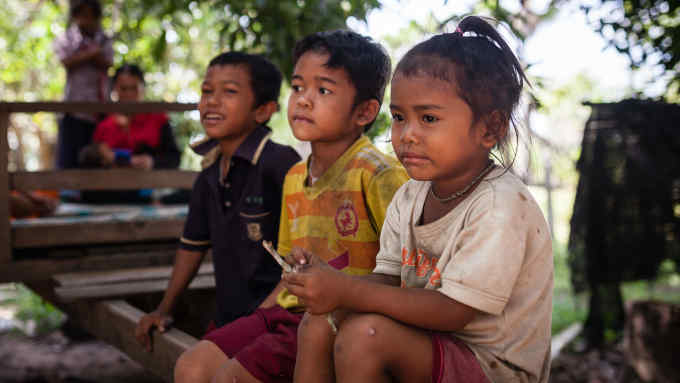