Get limited time offer
How To Spend It  Travel

Soak up the hot springs in Nozawa Onsen

Some time when I was 10 or 11, my English teacher asked the class to write a haiku around the theme of “Christmas in Japan”.

My mother was unimpressed. “Who came up with this bright idea? They don’t celebrate Christmas in Japan.” But we sat down and collaborated on the poem:

Roughly 40 years later, I thought of these lines while sitting outdoors in a natural hot spring bath, or onsen, in Japan at Christmastime. I was feeling pleasantly lightheaded from the combination of extremely warm mineral water and frigid mountain air when it dawned on me: it was a cold and wintry day and snowflakes were, in fact, falling gently.

There were many such quietly magical moments on family trips to Nozawa Onsen, a mountain village in Nagano prefecture, during our time living in Japan, where I worked for Nikkei, the FT’s parent company. All of us fell in love with this snow-blanketed jewel sitting near the peaks of Mount Kenashi.

Nozawa Onsen is known by skiers for the quality of its powder and, more recently, by foodies for its extraordinary restaurants and cafés. But it was soaking in the onsen that delighted us most. Nozawa Onsen has been renowned for its hot springs since the eighth century. Many of the local ryokans, the traditional Japanese B&Bs, have indoor onsens, but there are also charming free open-air bathhouses – 13 of them, known as soto-yu – dotted along the village’s cobblestone streets. Some visitors try to hit all of them in a mineral-bath version of a pub crawl, complete with stamps.

My childhood-haiku epiphany came at Furusato-no-yu, a bathhouse that has a more updated style than the others and charges an entrance fee. It became our go-to spot for a good soak, since it has indoor and outdoor options, heated indoor changing rooms and vending machines stocked with beer, in case it comes to that.

Nozawa Onsen first opened as a ski resort in the early 20th century, and it has been a destination for foreign skiers for years. The locals are proud of their powder, which they say owes its high quality to Siberian air travelling over the Sea of Japan. I don’t ski, thanks to an unfortunate disco accident, but friends and instructors maintained that the quality of the snow and the length of the runs makes up for the relatively low elevation of Mount Kenashi (1,650m). On our last visit in 2019, however, there was an alarming absence of snow – something locals and long-time visitors said they had never experienced before, raising concerns about the impact of global warming.

As an expat family, we loved how quickly Nozawa Onsen became a familiar place that felt like “our” spot. The heavy snows that fell on our first visit thrilled all of us, inspiring epic snowball fights and night-time walks to admire the bright lanterns and streetlights in the buried village.

And then there was the food scene, which has been gaining notice over the past 15 years, giving the otherwise traditional village a hip edge. Before we dropped the twins off at the mountain for a day of skiing, we would visit Tanuki for excellent coffee, decadent hot chocolate and a very satisfying western-style breakfast cooked by a team of international chefs.

The steam and golden sunlight made it feel like a temple

None of us could resist the steamed pork, vegetable and apple buns sold from a wooden box outside the Haus St Anton Jam Factory & Café. Its excellent restaurant, led by chef Kensaku Katagiri, blends European and Japanese styles and takes a seasonal approach to sourcing ingredients (the staff are extremely warm and friendly too).

In the evening, we would squeeze our way into the village’s bustling izakayas – bars that serve a variety of small plates and skewers – particularly the intimate Minato and Sakai, where we loved the grilled mackerel. More upscale is Himatsuri (“Fire Festival”), which has a multi-dish kaiseki menu and features interesting sakes.

Though Japan is addicted to soaking, Nozawa Onsen is the only place in the country that has “onsen” in its name – it replaced Toyosato Village with the more brochure-friendly name in the 1950s.

Yet the name works, since the hot water that feeds into the onsens is also central to life in the village. The rushing torrents alongside the streets are a constant reminder of the powerful natural forces in these mountains The water’s high sulphuric content also gives the whole village an eggy pong, but even this is put to use by the people who live here: locals prepare green vegetables and onsen tamago – hot-spring eggs – in it.

On our second visit I decided to branch out and try soaking in a few of the other soto-yu. The O-yu was the first to beckon. Situated on one of the charming cobbled streets, steam pouring from its roof against a bright blue winter sky, it was the picture of a classic Edo-era bathhouse.

By now I considered myself fairly expert on onsen customs. Squatting on a small, upturned bucket and taking a shower in front of others no longer felt awkward. I knew that water temperatures vary from bath to bath, and that it was OK to turn on a cold tap for a few seconds if things got too hot.

The O-yu is the biggest of the village’s bathhouses, and some guides label it a “must try”. Once inside, I could understand why. As I stood there before the customary shower-off, I glanced up to admire the interplay of rising steam and golden sunshine pouring through the open slats near the roof. It felt like a temple, and I prepared for something vaguely transcendent as I moved toward the stone pool. Only one other man, who looked to be in his mid-80s, was bathing.

I dunked a foot into the water and jerked it out immediately, almost surprised that my flesh wasn’t left sitting in a heap at the bottom of the pool. I tried again, this time plunging in all the way with one leg up to my knee. Excruciating. There would be no getting used to this – that day or ever. Later, I would read that water temperatures can reach 90ºC in some of the village’s onsens. (To avoid actually, literally getting burnt, there are online guides to the town’s public baths that are worth consulting.) 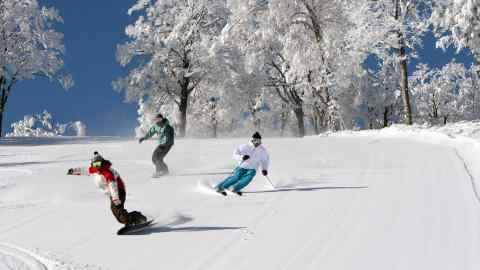 For a moment I was crouched by the pool, naked with bright red legs, my credibility as an onsen master shredded. I now look back on this as a sort of parable of my four years in Japan: every time I thought that I had figured out some aspect of life there, I would be shown how much more there was left to learn.

The old man had been watching me in silence; he said something I didn’t understand, which could have been advice, sympathy or commentary. In any case, he started to pack it in too and we washed off, dressed and left in silence. I still wonder: how could he stand it?

The sting wore off, both to my legs and my pride. Later, Jane and I would return to Furusato-no-yu, enjoy a long soak and maybe pop a quick vending-machine beer. There would be a crowded izakaya, and an energising walk back to the hotel through the village. Before the night was over, there might even be some gently falling snowflakes.