The art insider’s guide to Italy

The brainchild of the director of Gagosian Rome, Italics is a trove of unique experiences and undiscovered places to delight and inspire

A lesser-known fact about the celebrated installation artist Theaster Gates: he moonlights with a progressive ensemble called The Black Monks, which celebrates black American musical traditions via musical and sound performances. In January last year, the group came to perform at the American Academy in Rome, where Gates was residing for a few weeks. As a thank you, he wanted to arrange a unique musical experience for them. So he enlisted the aid of Pepi Marchetti Franchi, the founding director of the Rome outpost of Gagosian, the gallery that represents him.

“I asked around, and learned that at Sant’Anselmo on the Aventino – which is actually the seat of the Benedict order – the monks sing Gregorian vespers,” Marchetti Franchi told me one recent afternoon at the gallery, seated behind a huge square desk stacked with monographs and catalogues. “And it’s something no one seems to know about. I arranged a visit, and we ended up taking 12 or 13 people up to the church; and we were the only ones there.”

Few people in the Italian art firmament are as well connected – or as tirelessly prepared to seek out the unusual and undiscovered best-of-Italy – as Marchetti Franchi. Recently she has channelled these skills into co-launching a dynamic new cultural initiative. Called Italics, and co-founded with the art dealer Lorenzo Fiaschi (of the renowned Galleria Continua in Rome and San Gimignano), it unites 63 galleries across the country, ranging from the established Milanese antiquarian Carlo Orsi to Neapolitan powerhouse Lia Rumma to Laveronica, an emerging contemporary-art gallery in Modica, Sicily. They’re collaborating to bring their expertise to audiences both digitally, via content verticals on the Italics website, and eventually in the form of events, exhibitions and experiences. Pepi Marchetti’s hope is that the website will become the primary online destination for the art and culture of the peninsula and its islands. Members are publishing favourite places, addresses, institutions, historical sites and artisans, or simply writings and images; the idea is for the artists they represent, both famous and emerging, to start doing so too.

We take them to all our secret spots, private houses, hidden places – there are a lot of contacts to mine

“For now, it’s like a diary,” says Marchetti Franchi. “Because of our jobs, and the time we spend with the artists and VIPs – when they come here we take them to all our secret spots, private houses, hidden places – there are a lot of contacts to mine. This is a sort of compendium of personal knowledge that is quite off the beaten path.”

Like many other creative 2020 pivots, Italics came about as a result of the first wave of lockdowns. “Last March we went from being one of the world’s most desirable destinations to a sort of untouchable,” recalls Marchetti Franchi. “Lorenzo [Fiaschi] and I realised that no one would be coming for months, that all the fairs would be postponed if not cancelled. We needed something to keep business, and the conversation, going.” They worked fast, conscripting a handful of other gallerists as an initial sounding board: “We had our first Zoom at the end of April and were online by late October.” Expedience was especially important, she notes, for the younger, smaller member galleries, “the ones for whom the fairs were the only opportunity to connect with that international audience. This is, for them, a portal to staying relevant.”

While the site is still evolving, content updates are happening weekly: Victoria Miro, who has a satellite of her Hoxton gallery in Venice, recently penned an ode to her favourite Biennale lunch spot. Alessandra Di Castro, one of Italy’s preeminent antiques and decorative-arts dealers and president of the Jewish Museum Foundation in Rome, narrates a walk through the Wunderkammern of Trinità dei Monti, secreted away behind the more famous church atop the Spanish Steps. The plan for 2021 is to expand the collective’s sharing via real-world events and activities. “First and most importantly will be an exhibition, in due course,” says Marchetti Franchi – ideally, one that moves from antiquity through to contemporary, via Old Masters and modern, in an unexpected and provocative location. She tells me about Sperlinga, a 1,000-year-old fortified castle deep in the Sicilian interior that she visited last summer (“There’s something very James Turrell about the volumes there, and the way the light enters them”) – one of a handful of obscure but alluring venues she has in mind. Tailormade itineraries built around such events are also on the table; and, eventually, a series of private experiences – garden tours, studio visits, access to historic houses and collections – available only through Italics.

How To Spend It
A Gio Ponti pilgrimage in Italy 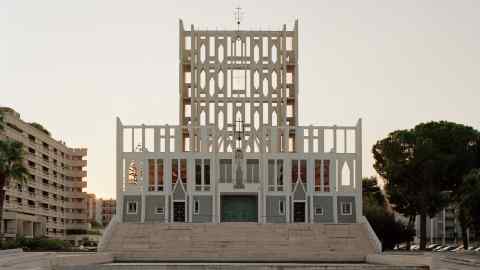 What’s perhaps most notable about the 63-strong collective, however, is its heterogeneity. In Italy, notes Marchetti Franchi, dealers tend to exist in their own specialisation silos. Collaboration between ancient, modern and contemporary galleries isn’t really part of the culture; the very idea of exchanges that cohere in a single narrative thread is innovative. Which Pepi Marchetti initially found surprising, when she first returned to Rome from New York to open Gagosian: “In my job I spend time with some of the most radical contemporary artists working today; and no matter how cutting edge, they all want to come to Rome” – something that Larry Gagosian himself, she notes, had intuited long before she did.

“They go see things like the Caravaggios and the Forum. Not only do they want to have this experience; creatively they’re in synchronicity with it. I see for myself how they are in dialogue with art and architecture of every era.” Dismantling the walls between those disciplines is something of a triumph for Italics, one Marchetti Franchi is proud of, and one that brings a new world of expertise to appassionati the world over.