Like his mentor, Virgil Abloh, the multidisciplinary designer has always looked to disrupt luxury. This time, he’s doing it with a Big Bang

When it comes to defining his occupation, Samuel Ross is a fast-moving target. Is he an artist? An industrial designer? A sculptor, fashion designer, philanthropist?

The answer, to all, is yes. And, with the launch of his first Big Bang Tourbillon for Hublot, he can now add watch designer to that list. Executed in satin-finished titanium, paired with cochineal-coloured rubber, and visually defined by a honeycomb pattern of perforations, it recalls an elaborately designed trainer – which makes sense, given that Ross is a footwear designer too, having collaborated with Nike, Converse and others.

Born in Brixton, 30-year-old Ross studied graphic design and illustration at De Montfort University in Leicester before working as a product designer for Wilkinson and Beko Kettles. At 21, he was “discovered” on Instagram by the polymath Virgil Abloh, who took him on as an intern and then design assistant, where he worked on projects for Yeezy, Abloh’s own label Off-White, Hood By Air and Stüssy. In 2014, he launched his own luxury brand A-Cold-Wall*, through which he explores the various codes of the British class system – creating collections that contrast sports‑ and workwear with tailoring.

Ross remained close to Abloh, last speaking to the late Louis Vuitton menswear designer the day before he died in November 2021. Like his quondam mentor, Ross is the founder of a successful brand, a prolific collaborator, industrious, interdisciplinary and one of only a handful of black designers working in the fashion industry.

Ross’s litmus test for a project is that it needs to have what he calls “three points of discovery”, a trinity of characteristics that sets it apart from what already exists. With the watch – the first he’s ever designed – “it is the ergonomic rubber band; the perforated hexagonal patterning that filters throughout the entire product; and, if you hold this watch up to the light, you can see directly through it but you also get this beautiful shadow and depth, because of internal perforations throughout the watch. Those are the real focal points,” says Ross. “We totally redeveloped the look and feel of what really belongs to the Hublot portfolio.”

With its extravagant aesthetic, Hublot seems a strange choice for a self-confessed minimalist but, as Ross explains, “There are ways that you can approach the semantics of what minimalism means. One could say it’s just down to the number of objects one owns, or it can be about focusing and distilling a level of concentration. It’s more the latter in this case, where the watch itself is deeply saturated, enriched with detailing and material conversations. But it’s a standalone sculptural item. You’re not going to see multiple iterations on style sheets and merch plans in coming years. That design is fixed.”

As well as being the youngest person with whom Hublot has collaborated, Ross also won the coveted Hublot design prize in 2019, and is an ambassador for the brand. “When we saw the way he works, we continued the discussion and decided to start working on a possible watch,” ​​says Hublot CEO Ricardo Guadalupe. “The project took time, as this is something completely new in terms of design and construction. But the result is stunning.”

Ross is particularly proud that the collaboration extends beyond the product itself. He eschews the word holistic, preferring the term “end-to-end design”, likening the work on and around this watch to a “full-stack app. By that I mean we’re looking at the print materials that support the storytelling behind the innovation and process of the partnership.” The watch launches on 18 May in New York with a full-scale installation around it, “and there will be a layer of that behaviour, and experience, delivered globally within the London, Geneva and Tokyo boutiques. I think that is the real innovation,” says Ross.

“Samuel’s unique sense of aesthetics and form fits perfectly with our team’s approach to one-of-a-kind design,” says Guadalupe. “Hublot values experimental and innovative materials, and Samuel’s work is inherently based in these values. His transversal approach to texture, form, fashion and design represents a truly unique vision.”

Newness, says Ross, should be the aim of all collaborations; the sadness is that so many end in banality. “The series of collaborations that we’ve seen in the past few years have been absolutely awful. A general release product is the way that a consumer should be looking to go at this point unless one treats the process of design with serious respect and finds a way to apply newness to create something that did not exist before.”

HTSI
The top watch and clock trends for 2022 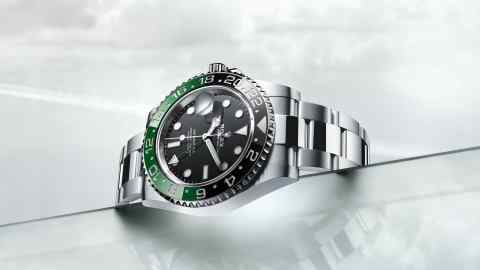 “The future is more about how these partnerships with artists and designers take shape,” adds Ross. “It’s less about a shotgun approach to collaboration. It’s much more of an architectural practice, of layering an experience: a slower process with a longer throw of integration. The old way that luxury has been presented maybe isn’t applicable for the next generation’s needs and desires. There is a necessity and a desire for information and luxury to be contorted.”

“Big Bang Tourbillon Samuel Ross” is certainly a watch, but hold it up to the light and, in that dappled honeycomb shadow, it is possible to see the beginnings of a manifesto for a new type of luxury collaboration.