Up to 17,000 households still live in privately owned apartment blocks with dangerous cladding similar to the Grenfell Tower — despite a government scheme aimed at making the buildings safe.

A £200m government fund was launched this year to replace cladding on these buildings but it has so far approved preliminary funding for just one tower despite aiming to pay the cost of replacing the material for almost half the 184 private sector blocks that need work.

Flammable cladding was blamed for the rapid spread of the catastrophic fire at Grenfell Tower, in which 72 people died two-and-a-half years ago.

Government tests have since pinpointed more than 400 towers with the aluminium composite cladding systems used in Grenfell, of which 184 are privately owned.

Fixing private sector buildings has proved problematic, however, with freeholders, developers, leaseholders and warranty providers battling over who should bear the cost.

Ministers in May announced a £200m fund to refit privately owned buildings but so far only one has received approval for “precontract support” ahead of starting work. 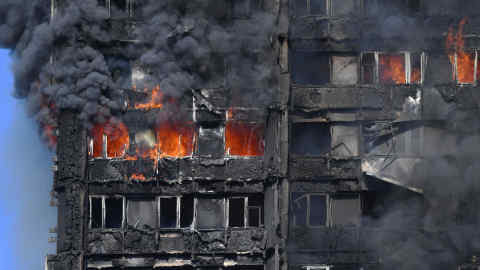 Of 184 privately owned buildings with ACM cladding, developers, freeholders or warranty providers have agreed to pay for a total of 97 to be made safe. But just 15 of these have completed remediation work and it is only under way in another 25.

The remainder can apply for government funds, but just 14 applications have been submitted ahead of the end of 2019 deadline, according to government figures released on Wednesday. That leaves between 13,300 and 17,100 households still in privately owned homes yet to be made safe, according to the government data.

The housing secretary Robert Jenrick has threatened to “name and shame” building owners that do not take action to replace the ACM cladding, a threat that campaigners believe is not sufficiently tough.

Sir Martin Moore-Bick, the chairman of the public inquiry into the Grenfell disaster, urged last month that “the programme of remedial work should be pursued as vigorously as possible”.

Ritu Saha, a spokesperson for the campaign group UK Cladding Action, said a complex application process had caused delays since the government fund opened for applications in September.

Each leaseholder in a block of flats is required to submit a state aid form, which the government argues is necessary to comply with EU rules. But some investor-leaseholders are resident overseas and difficult to contact.

“I do not believe a single building will be able to complete the application process on time,” she added.

Ms Saha, who is calling for more support and guidance for applicants, said residents of her building, Northpoint in Bromley, which is applying for government funds, have already spent £350,000 on fire patrols and another £120,000 for a new alarm system. Leaseholders of the 57 flats cannot sell or remortgage their homes — which are valued at zero — and live with constant worry about fire.

“There is an extreme level of anxiety. There are elderly people, people with babies, who are constantly worried about what happens if fire breaks out in the middle of the night . . . This has come at huge financial cost to all of us,” Ms Saha said. “People are reaching breaking point.”

Cladding has been replaced in 118 of the 436 buildings at risk. Progress has been quicker on social housing buildings, where some 83 out of 98 have begun remediation after a dedicated fund was announced in May 2018.

But the programme does not include buildings with other types of cladding, such as high-pressure laminate cladding, which has been deemed unsafe if combined with combustible insulation.