Stories from the front line of dementia

‘This disease is out of our control, so we have to learn to love the moments we do have’

For this year’s Seasonal Appeal, the Financial Times is raising funds for Alzheimer’s Research UK.

We have been publishing stories from journalists and readers, to share the first-hand experience of being a supporter or sufferer. Readers have continued to share their stories in response to our callout.

In this last instalment, we hear from a range of voices that show how different people’s experience of Alzheimer’s disease can be.

This collection includes stories collected by the Dementia Alliance for Culture and Ethnicity (DACE), a non-profit organisation that raises awareness for sufferers from black, Asian and minority ethnic communities in the UK.

Stories have been condensed and edited for clarity

I’m a 60-year-old man of African-Caribbean heritage brought up in the UK. Leaving school at 13, I spent my teenage years going through youth offending and prison. It was while on parole out of prison that Janet Kay, a friend of my sister’s, took me to the recording studio where she was recording the song Silly Games, which later became a UK hit.

This experience inspired me to pursue a career in the music business, eventually setting up my own music production company. I had three national hit records and established a youth music programme for those underachieving at school or at risk of offending. My career in music completely changed my life.

About five years ago I started having problems in being reliable for appointments and losing my temper over small things, but I dismissed it. I put the increasing problems down to ‘stress’. I did what African-Caribbean men usually do with any health issue: I ignored it and ‘toughed it out’. I wasn’t going to see a doctor. I knew there was something wrong, but did not appreciate the significance of the symptoms. If someone said I’d done something and I couldn’t remember, I just got angry.

I carried on toughing it out until four years ago when I collapsed at home, alone. I told the emergency operator that I thought I was dying, but somehow managed to drag myself across the floor to open the door to let in the ambulance driver. Shortly afterwards, I was diagnosed with Alzheimer’s disease and vascular dementia.

I still make music and write poetry, and I find that the best thing for keeping my motivation and positive attitude is listening to and continuing to make music. Music is a therapy which helps me to cope.

As told to David Truswell, chair of DACE

Someone once said that if you have met one person with Alzheimer’s, then you have only met that one person. The symptoms can be extremely varied. Our mum can correct my grammar, hold a conversation about books she studied for A level, quote Shakespeare and accurately do crosswords. Despite this, she doesn’t know where she is from minute to minute, doesn’t remember who her husband was or if they had children, but also mourns his death every time he is mentioned.

My father was diagnosed with dementia in 2012 at the age of 79. His decline started with him forgetting the names of people he had known for decades. Then he started repeating certain sentences and then he stopped talking. We think he may have suffered a mild stroke.

My father was meticulous about keeping records at the best of times, but he took it to a different level in the months leading up to his worsening condition. He took every scrap of information — financial records, tenancy agreements, visa applications dating back to the 1950s, council applications, letters to siblings, photographs dating back to his childhood — filed it and stored it in his room perfectly as if to say, ‘Right, when I am gone, you know exactly where to look’.

As he slowly slipped into his condition, he accepted it with dignity and calmness — he used to have bouts of crying but they cleared quickly. He was never aggressive, as has been mentioned of other people with the same condition.

It is hard to see a man who was highly educated, active and outgoing slip away to a point where he cannot communicate at all or remember those who are closest to him. Although, every now and then there is a shadow of a smile, a twinkle in the eye which says, ‘I am not all gone!’.

My mother suffered from Alzheimer’s. What is important is that she died a very peaceful death in her own bed knowing full well that she was loved and taken care of by her family. In India parents are revered. Loving and taking care of them until their death gave me a tremendous amount of satisfaction.

My father was diagnosed early last year and it has turned both our lives around. I am 25 and felt it shouldn’t have happened to us this early. It feels like no one else is going through this at my age. I am very close to him and felt I had to do all I could and more, but this disease is out of our control. We just have to learn to love the moments we do have and enjoy life just in a different way.

Be strong but don’t be afraid to be vulnerable and lean on other people. It’s OK to acknowledge what’s happening and that it’s hard for you. Look out for yourself as well as them.

I am in my eighties and live alone in a council flat in London, supported by visits from my two granddaughters. My granddaughters arranged for volunteers from a local Chinese community centre to make home visits and walk me to their centre for lunch each week.

It has been increasingly difficult to communicate with my granddaughters, who were brought up in the UK and speak very little Cantonese. I have begun to speak increasingly in Cantonese, as I’ve been losing my English skills with the advancement of my dementia.

Dementia has taken our mum from us much too soon and has also stripped my dad of his life as he has been devoted to looking after her. I often tell him that my brother and I have not only lost our mum but also our dad too, yet they are both still alive.

Don’t be scared to ask for help, from professionals to friends and family members. Dementia is a lonely journey and not just for the person who has it.

I’m 77 now and was diagnosed with vascular dementia a couple of years ago.

I came over to England from Ireland when I was 14. I was an electrician in Greenwich for about 20 years and then was a local councillor in Bexley for 16 years.

I’ve got children of my own and I’m a grandad to two girls and a boy. I keep busy now helping my wife with the local Irish community services in south-east London. I like to get out, go to lunch clubs and things like that. I’d say to any Irish person who is having memory problems like me, get in touch with an organisation to get help.

I’m also helping out with Irish in Britain, a community organisation with a special group for working with memory loss. They are always looking for new ideas and I came up with ‘Emerald Island Discs’. Based on ‘Desert Island Discs’, we sit down with someone to make a book and CD based around their eight favourite songs. We want this to be something people can have to show more about them and who they are if they ever go into hospital or a care home.

As told to David Truswell

Anyone can help. Click here to find out how

Explore the series
READ MORE
My father, his dementia and our last year together 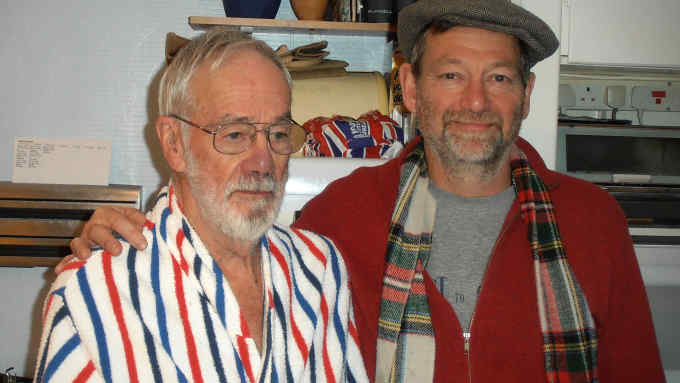