Cameron tells friends he made mistake over Greensill texts to Sunak

David Cameron has admitted to friends that in hindsight it was a mistake to use private text messages to lobby chancellor Rishi Sunak to help his employer Greensill Capital gain access to a Covid-19 loan scheme.

Cameron, heavily criticised over his role in the Greensill affair, insists he broke no rules and that it was right for him to lobby the chancellor on behalf of a company involved in financing a large number of UK companies.

But a friend of the former UK prime minister said the text messages to Sunak’s private mobile number could be seen as a mis-step: “I think he would agree it could be argued that a formal letter would have been more appropriate.”

Cameron has made no public comment since the collapse of Greensill last month. Repeated requests by the Financial Times for comment about his role at the finance company have been turned down by him and his office.

But now his friends have started to give Cameron’s version of events, including claiming that during his time in Number 10 the former premier met Lex Greensill, founder of the firm, on no more than two occasions.

Greensill, an Australian financier, carried a business card describing him as a “senior advisor, prime minister’s office”, giving a personal No 10 email address, but friends of Cameron claimed he barely saw him in Downing Street.

“David thinks he met him once in the entirety of his time as prime minister,” said one friend, adding that this was around the time in October 2012 when Cameron announced a new supply chain finance scheme, intended to improve cash flow for government suppliers.

The friend added that Cameron could not exclude the possibility he met the financier — who had a desk in the Cabinet Office — on a second occasion, possibly at a business event.

Cameron took Lex Greensill as a member of his entourage to a Federation of Small Businesses conference in 2014, pointing to him in the audience and saying: “Lex, where are you? Give us a wave. Lex is sorting out the whole supply chain issue for us.”

Cameron’s refusal to publicly explain his role at Greensill Capital has intensified criticism of the former prime minister, but his friends say he was a “PAYE employee” — that exempts him from rules on “third party lobbying” — and was not a board member.

They also say that reports that Cameron hoped to make £60m from share options at Greensill were “massively exaggerated”, while declining to say how much he hoped to make. The options are now worthless following the company’s collapse into administration last month.

Cameron’s lobbying attempts were fruitless but he has admitted to the friends that his reputation has been damaged. One colleague said Cameron, “with the massive benefit of hindsight”, recognised it might have been better not to lobby by multiple texts.

“He didn’t break the rules, but perhaps it would have been better to have formally put things in a letter,” the colleague said. Cameron has told friends that texting seemed appropriate at the time because the country was facing a fast-moving economic crisis.

The UK opposition Labour party claims that Sunak may have broken the ministerial code after two replies by the chancellor to Cameron’s text messages — sent in April 2020 — were released by the Treasury on Thursday “in the interests of full transparency”.

An aide to Sunak said Cameron had messaged the chancellor “multiple times” on his personal phone. Sunak left a number of texts from the former prime minister unanswered but in one he promised to call him back.

Labour said Sunak was giving Greensill preferential treatment because of Cameron’s lobbying and demanded to know whether officials were present when the chancellor called the former prime minister.

In the second text Sunak told Cameron he had “pushed” his officials to try to find ways of admitting Greensill to a Bank of England loan scheme — the Covid Corporate Financing Facility (CCFF). In the end, Cameron’s request was rejected by Treasury officials.

Labour claims that Cameron’s use of Sunak’s mobile phone gave Greensill privileged access to the chancellor unavailable to other businesses. Sunak’s aides strongly deny any breach of the ministerial code.

Cameron’s allies insist that at the time he joined Greensill in 2018 there was no reason to foresee problems ahead with the firm.

The former prime minister joined shortly after General Atlantic, a “growth equity” pioneer, had bestowed its good name and $250m on Greensill Capital. “They had carried out all the due diligence,” said a friend of Cameron.

However, that same year the Financial Times began publishing a series of articles outlining that Greensill was providing billions of pounds of financing to Sanjeev Gupta, the metals magnate whose steel empire is now on the brink of collapse.

Shortly after Cameron lobbied Sunak in April 2020, the FT published an article revealing that a string of Greensill’s clients had defaulted on their debts in high-profile corporate collapses and accounting scandals.

Cameron was said to have been attracted to the idea of working for a rising star of British fintech rather than a well-established bank. “He saw it as new and refreshing,” said one friend.

The Treasury rejected Cameron’s pleas to give Greensill access to the CCFF, a scheme under which the BoE provided cash to larger companies in exchange for corporate paper. 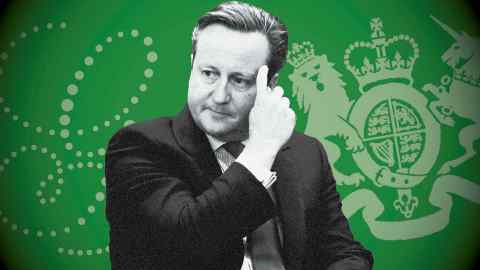 Cameron is not intending to break his silence any time soon, leaving it to friends to make his case for him — including defending his association with Saudi Arabia’s crown prince Mohammed bin Salman. Lex Greensill joined Cameron and “MBS” for a desert camping trip in early 2020.

Cameron visited Saudi Arabia publicly in October 2019, attending the so-called “Davos in the Desert” summit in Riyadh. The trip — a year after the murder of journalist Jamal Khashoggi by Saudi agents — was criticised at the time by Amnesty International.

The former prime minister’s supporters said Saudi Arabia held the G20 presidency in 2020 and that it was widely accepted among western countries that Riyadh was an important country that needed to be brought into the international community.

Get alerts on David Cameron when a new story is published