At the beginning of last week, EU leaders were still clinging to hopes that Russian president Vladimir Putin might be dissuaded from launching a broad military attack on Ukraine.

French president Emmanuel Macron, reporting back from his latest talks with Putin, kept faith in the diplomatic track. The EU imposed sanctions on a few more people for the Russian-led war in the Donbas. And Germany continued to resist sending weapons to Ukraine.

It was the kind of hesitant response that critics of the EU have come to expect — despite its aspirations to become a geopolitical power.

Fast-forward seven days, though, and Europe’s strategic outlook has been transformed. It was led by a momentous policy turn in Berlin, which pledged to ramp up defence spending, dropped its resistance to arming Kyiv, endorsed damaging financial sanctions on Moscow and embarked on a costly drive to reduce its energy dependence on Russia.

The EU’s illusions about the nature of the Russian threat to Europe have crumbled. Where European capitals once favoured dialogue, they have turned to deterrence. Engagement with Russia has turned to isolation as business, cultural and sporting ties are cut. The shift has occurred with breathtaking speed — even if it took Russia’s decision to launch the biggest military offensive in Europe since the battle of Berlin in 1945 to bring it about.

It was not long ago that European capitals argued over the need for a European Peace Facility to provide weapons to third countries. Now Josep Borrell, the EU’s foreign policy chief, has earmarked €450mn to arm Ukraine, including with fighter jets.

“The paradigm has changed. Everything has changed. Nobody is questioning where we stand any more,” said Nathalie Tocci, director of Italy’s Institute for International Affairs. “It is not only war in Europe, it is war against Europe.”

Michel Duclos, a former French diplomat and adviser to the Institut Montaigne think-tank, said Germany, France, Italy and even to a degree the UK — until the 2018 poisoning of Sergei Skripal on UK soil by Russian agents — failed to recognise that Moscow was becoming more aggressive. Their assessment was shaped by a dominant narrative that Russia felt threatened by the enlargement of Nato, he said.

“Our leaders discovered with horror that the problem for Putin was not the security of Russia but his need to take back the Ukrainian lands,” Duclos said. “When he talked about ‘denazification’ and the cleansing of Ukraine, it was not the old Putin. It was a Putin prepared to risk it all to satisfy his ethnographic-nationalist imperative.”

The illusions about Russia were so big in Germany, said Jana Puglierin, director of the European Council on Foreign Relations in Berlin, that Putin’s aggression brought a tectonic shift in German thinking.

“The German public has finally woken up,” said Puglierin.

For decades, German policy had been driven by two nostrums: that Russia could be made a responsible security partner in Europe, and that dialogue and engagement, particularly through trade, were more effective than deterrence. They have been turned on their head practically overnight.

“With the attack on Ukraine, Putin is not just seeking to wipe an independent country off the map,” German chancellor Olaf Scholz told the Bundestag on Sunday as he tore up Germany’s postwar antimilitarist foreign policy doctrine. “He is demolishing the European security order that had prevailed for almost half a century.”

While Germany was last week still dragging its feet on excluding Russia from the Swift global payment system, by the weekend it had signed up to western sanctions against Russia’s central bank aimed at destabilising the financial system, in an escalation of economic warfare.

The FT ViewThe editorial board
A watershed moment for Germany 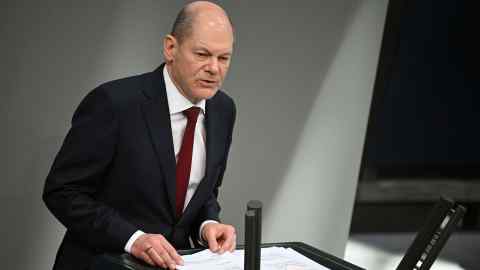 For years the EU had tried to avoid sanctions that hurt ordinary Russians. Now the west is looking to wipe out their savings and cut them off from the rest of the world. Russians have become unwelcome. European airspace is all but closed to Russian planes. Russian football teams have been suspended from international fixtures and club competitions.

The objective seems to be to make ordinary Russians understand the consequences of Putin’s war, rather than the “special military operation” in Donbas he still pretends it to be.

The crisis has also brought the EU closer in ways that seemed unimaginable only a few months ago. EU capitals have co-ordinated their policy on harbouring Ukrainian refugees — a joint approach sorely missing during the 2015-16 migrant crisis. And even Hungary’s Viktor Orban, who has nurtured close ties with the Kremlin, has backed tough sanctions, saying it was time for the EU to show “strategic composure”. Meanwhile, post-Brexit Britain has resumed co-operation with the European Commission.

Pierre Vimont, a senior fellow at Carnegie Europe, a think-tank, and a former EU diplomat who acted as Macron’s special envoy to the Kremlin, said that in the long term a new relationship with Russia “would have to be built on top of today’s crumbling security order”.

“We can’t just hope that we can push Russia behind its borders and that the Russia issue will vanish.” But now was the time for Europe “to show its strength and to show it stands with Ukraine”, he said. “These are giant steps [for Europe]. I don’t think there is a way back.”