“This time I wanted the clothes to be the statues,” said Kim Jones the British artistic director of Dior’s menswear. He’s explaining, in a typically low-key manner, the thought-process behind eschewing a giant flowery statue of the founder, or a chromium sexed-up cyborg in favour of a 76-metre travelator that coursed through the venue of his Autumn/Winter 2019 show. Atop, a bevy of male models were conveyed, like magazine images, while thumping house reverberated in the background. C’mon, Vogue.

It was, as the industry is won’t to capitalise, A Fashion Moment.

It was a moment because Kim Jones is one of the best menswear designers in the world, and is working with a fashion house with one of the most accomplished ateliers — for both men and women. At the moment, not even a year into his tenure, he’s still unpacking his stuff at Dior — unpacking his ideas and unpacking what Dior means and how to translate that into menswear that feels both connected to that, and also new. It’s doubly tricky because Dior is the most feminine of fashion houses, with a storied history comprised mostly of ballgowns and cinched skirts — “all the trappings of a fairy princess,” to borrow a phrase written by Dior himself in his autobiography. That doesn’t make for easy menswear.

Dior’s men’s template was determined by Hedi Slimane back in the early Noughties, and hadn’t been fussed with since — it comprised a skinny black suit, minimal detailing, excellent craft, but after nearly two decades, didn’t generate that much excitement. As Hedi Slimane will be presenting his first ostensibly menswear collection for Celine on Sunday night — and as his September show featured unisex looks, on male models, that cut close to his Dior template — there is an obvious need for Jones move away and define something distinct and different. A new look. It’s clever he recognises that; almost as clever as what he’s chosen to do about it.

If Jones’ debut was a meticulous unpicking of what Dior is, or perhaps was — its signature pinks and greys, its flowers, a Toile de Jouy once used as wallpaper, a tailored jacket based on the Oblique line of Autumn/Winter 1950 — this collection showed where he can take it. “It’s not about being homage-y,” said Jones. “It’s about taking it to now.”

The references were hazy, to the couture techniques of tailleur and flou (the French term for the draping and soft structure that creates Dior’s celebrated ballgowns). Who cares where they came from? The results were compelling clothes with a forceful, sucker punch of luxurious desirability: a softly-tailored, round-shouldered coat in pearlescent grey, a sleek black suit, a double-breasted evening tuxedo. Proper, polished, grown-up clothes — none of them conventional, all of them exceptional.

Alongside those slow burners (probably the core of what will show up in stores come winter) there were stars — Dior himself referred to those as his coups de Trafalgar, the pieces that cause excitement, even outrage. Jones’s were a collaboration with the American punk artist Raymond Pettibon — Christian Dior was a curator of the avant-garde in the Twenties before the Great Depression wiped out the fortunes of his bourgeoisie family and meant their son had to work for a living. Jones’ art collaborations are an open ode to that — but they are, perhaps, also a great excuse to allow him to cross-breed fashion with other creative influences, in a manner he loves.

They also create saleable product, which executives love. He did that for spring with the graffiti artist KAWS — the capsule generated queues around the block when it debuted in Japan in November. Here, the Pettibon works were printed and knitted, or extravagantly embroidered in beads. Those were the hardcore pieces — they’ll also retail for extreme amounts. But the Pettibons also extended to a saleable spray-paint of panther spots daubed over sweaters, and across cute, consumable little bags worth queueing for.

A number of outfits were accessorised with sashes of satin, winding their way through tailored jackets and coats ingeniously and intriguingly, like evening scarves gone haywire. They were inspired by moulage, the couture technique of draping directly on the body in womenswear, Jones said. They looked great , as did lace sweaters, and furs picked out with leopard-spots, and the colours of icy pale blue and a cinnamon-mauve. On paper, that all sounds femme — and, indeed, women have been seizing on Jones’ Dior menswear (Chloe Grace Moritz, Noomi Rapace, Kate Moss) have all sported it with gusto. They’ll wear these looks, too. But, somehow, on those models scrolling out on that conveyor belt, like a luxury goods version of The Generation Game, it looked the ne plus ultra of modern masculinity. Hard and soft, tailleur and flou, him and her. 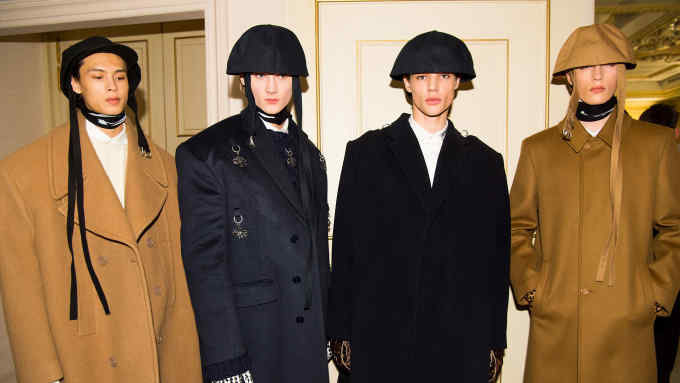