White men most likely to feel better off under Trump — poll

Americans who say they are financially better off under Donald Trump’s presidency are overwhelmingly white men, despite the president’s claims that “almost everyone” has felt the benefits of US economic growth since he took office.

The sharp ethnic and gender differences over Mr Trump’s economic performance, revealed in a new poll of likely voters for the Financial Times and the Peter G Peterson Foundation, underscore the challenges facing the president as he seeks re-election and the uphill battle for Democrats in winning back the votes of white men who helped propel Mr Trump’s 2016 victory.

The recent caucuses in Iowa pointed to the importance Democrats have placed on peeling working-class whites from the president’s column. Pete Buttigieg, who remains in the lead in the slowly arriving Iowa results, was propelled in part by winning in counties that had voted for Barack Obama in 2012 but backed Mr Trump in 2016.

Mr Obama won Iowa, a swing state where 90 per cent of voters are white, in the 2008 and 2012 US presidential elections, but Mr Trump triumphed there in 2016, beating Hillary Clinton by nearly 10 percentage points. Mr Buttigieg pointed to his strong showing as evidence he could bring voters “back into the fold” and win a general election in November.

Mr Trump has made his economic record central to his case for re-election, and used his State of the Union address on Tuesday to claim “incredible results” in the US economy.

Last month, the president insisted that nearly all Americans have benefited from the country’s longest stretch of economic expansion, which began early in Mr Obama’s presidency, and has continued for more than a decade.

“Are you better off now than you were three years ago?” Mr Trump wrote on Twitter. “Almost everyone say YES!”

But the latest FT-Peterson Economic Monitor showed that among likely voters, white men are the only group with close to a majority who believe they are better off. Forty-eight per cent said they were either “much better off” or “somewhat better off” since Mr Trump took office.

Video: US Senate acquits Donald Trump on both articles of impeachment

All other groups are significantly more dissatisfied — including white women, illustrating Mr Trump’s persistent gap with female voters. Only 33 per cent of white women believe they are better off financially now than they were in 2016.

Joann Boldt of Des Moines, Iowa, a retired United Airlines flight attendant who voted for Mr Trump in 2016, is typical of the kind of voters Democrats are targeting. She volunteered for Amy Klobuchar, a moderate senator from Minnesota, in Monday’s caucuses, and said she would vote for a Democrat for the first time in November’s presidential election.

“I will always be a Republican at heart. But when Trump separated the parents from their children, he lost me there,” said Ms Boldt, in a reference to the president’s immigration policies at the US-Mexico border.

The findings are part of the monthly FT-Peterson US Economic Monitor, which tracks voter sentiment towards the US economy in the run-up to November’s presidential election. The survey focuses on whether likely voters feel better or worse off financially since Mr Trump became president. Ronald Reagan defeated Jimmy Carter in 1980 by asking voters: “Are you better off than you were four years ago?”

Overall, dissatisfaction with personal finances has remained constant since the FT-Peterson poll began tracking voter sentiment last October. The latest survey shows two-thirds of likely voters believe their finances have not improved since Mr Trump took office, a figure that has remained largely unchanged over the past four months despite a 7 per cent rally in the S&P 500 and 2.1 per cent economic growth in the fourth quarter.

The most recent FT-Peterson poll was conducted online by Global Strategy Group, a Democratic polling company, and North Star Opinion Research, a Republican group, between January 21 and January 26. It reflects the opinions of 1,004 likely voters nationwide, and has a margin of error of plus or minus 3 percentage points.

The vast majority of Americans say technology companies are “mostly good” for the US economy, casting doubt on whether Democrats’ calls to crack down on “Big Tech” will win over voters in November’s US presidential election.

The latest FT-Peterson poll found 90 per cent of respondents said technology companies are “mostly good” for the US economy, compared with 10 per cent who said they were “mostly bad”.

The findings raise questions about whether Democrats’ calls for aggressive action against multinational technology groups will win support — either in the current primary process, or in the general election against Mr Trump. Senator Elizabeth Warren has been among the most vocal critics of “Big Tech” among Democratic contenders, calling for the break-up of major companies, including Facebook, Amazon and Apple. Ms Warren finished third in the delegate count in Monday’s Iowa caucuses, based on official results from most precincts.

Mr Trump has not called for the break-up of Big Tech, but has attacked social media companies, claiming they are biased against Republicans, and Amazon, whose founder Jeff Bezos also owns the Washington Post.

The president has suggested “there is something going on in terms of monopoly”, and last year the US Department of Justice announced an antitrust review of “market-leading online platforms”.

The US lacks national data protection legislation akin to the EU’s General Data Protection Regulation, but new rules that came into effect in California last month are likely to set the standard for privacy across America. The legislation gives consumers in California the right to see all the personal information a business holds about them and ask for that data to be deleted or not sold to third parties. The rules apply to any company with at least $25m in annual gross revenues that does business in California, or collects and processes data on the state’s residents. Lauren Fedor 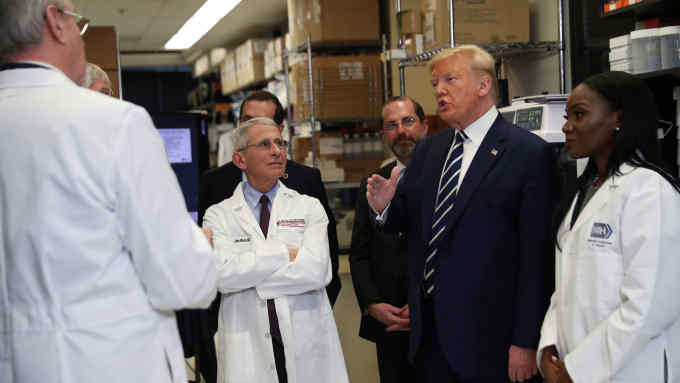