What’s the bid for this rarest of Bugattis?

One of three surviving Atalante Coupés, the ultimate getaway car is up for auction

It’s 10pm on a bitterly cold night and the traffic that courses around Paris seems finally to be thinning out – making the unique opportunity I’ve been given to get behind the wheel of an 85-year-old car valued at between €2mn and €3mn seem marginally less daunting than it did a few hours earlier.

With its sleek black-and-cream coupé body and its giant Marchal headlamps guiding the way, we emerge from an underground garage into the nocturnal bustle of the Champs-Élysées. For me, this is going to be an adventure; but given what the car has been through in the past, it will seem to it rather tame. If old motors could talk, this Bugatti Type 57 Atalante, set to cross the auction block in Paris next week, would have tales to tell.

One of just three surviving Atalante Coupé models with a sliding sunroof (known when it was made as a bureau top), it was delivered in July 1936 to a flamboyant and successful Marseille jeweller named Charles Olivero. Olivero sought to relax in his acquisition by competing in gruelling races such as the Rallye des Alpes, the Monte Carlo and the Liège-Rome-Liège. Although according to Pierre Novikoff of auction house Artcurial, Olivero’s enthusiasm for driving might have disguised an ulterior motive.

“His regular co-driver was a pianist known only as Daisy whose presence, according to contemporary reports, attracted no suspicion from Olivero’s understanding wife as she was allegedly ‘devoid of any female characteristics’,” says Novikoff. “Nor did Madame Olivero question her husband’s decision to drive the Atalante on a 1,200km round trip several weekends on the trot in order to monitor the progress of a body being built for his next Bugatti by the Colmar-based coachbuilder Gangloff.”

When the new Bugatti arrived in the spring of 1939, Olivero sold the Atalante to a dealer in Nîmes who quickly moved it on to aviator Léon Givon, a first world war flying ace who later became chief pilot for Air France. Givon is believed to have owned the car for only a few months before he was forced to hide it from the Nazis and answer the call to arms as a member of the French Resistance.

Postwar, the Atalante was acquired by Luxembourg-based industrialist Rudi Cloos, who had it restored and reconfigured to closed-roof specification before selling it to fellow Bugatti enthusiast Albert Jean de Lay in late 1950. De Lay was a Belgian architect who was assigned to work on a government building programme 6,800 miles away in and around Elisabethville, a provincial capital of what was then the Belgian Congo. He decided to take his four-wheeled pride and joy with him and for the next decade de Lay and his wife used the car as their means of getting around the city, which had grown rich on the proceeds of copper mining.

Things turned sour when the Congo declared independence in 1960, leading to civil war. Congolese soldiers rebelled against their Belgian commanders and turned on the white settlers. De Lay and his wife fled. The obvious vehicle to escape in was a brand new MGB de Lay had acquired rather than the Bugatti that, by then, had developed a serious starting problem. But it was into the latter that he bundled his spouse and their pet dog before making a successful break for the Zambian border. Back in Belgium and having lost everything they owned apart from the Bugatti, the de Lays sold the car back to Cloos in order to raise cash with which to restart their lives.

Passing through further hands, it was eventually restored to its original condition and exhibited at two of the world’s leading concours d’élégance events, Pebble Beach in California and Villa d’Este in Italy, before being bought by the current owner in 2003 who, according to Novikoff, has spent the best part of the past 20 years using it to “criss-cross Europe and the United States”. 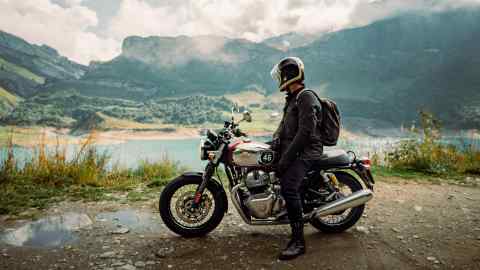 And after driving it in the cold night air of Paris for an hour or so (roof open, of course) I can understand why. Its magnificent, 3.3-litre, straight-eight engine runs with turbine smoothness and even the unforgiving cobbles of the City of Light failed to produce a rattle or clunk. The shell-shaped running lights, the sextet of pea-shooter exhaust pipes and the exquisite dashboard, meanwhile, all confirmed the widespread belief that a prewar Bugatti is not merely a car, it’s a rolling work of art.

And yes, I’d choose it over an MGB – even if my life depended on it.

The Bugatti Type 57 Atalante will be sold on 3 February during the official auction at the Retromobile classic car show, Porte de Versailles, Paris. See artcurial.com