Ministers are to renationalise the management of probation services in England and Wales after the failure of a chaotic privatisation that put public safety at risk.

David Gauke, justice secretary, will announce on Thursday that the publicly run National Probation Service is to take back control of all management work, ending a regime that outsourced supervision of all but the highest-risk offenders to eight companies, including Sodexo.

Several of the companies expressed disappointment at the move, saying the changes would create a more fragmented system that would increase costs.

The part-privatisation of probation services in 2015 by Chris Grayling, justice secretary at the time, split probation work into 21 regional contracts worth £3.7bn to the outsourcing companies over seven years.

It was intended to bring down reoffending rates and inject innovation into the rehabilitation of ex-prisoners but the system has been beset by difficulties.

Glenys Stacey, the chief inspector of probation, warned this year that the current system was “irredeemably flawed”. Parliament’s spending watchdog criticised the probation service as presenting “significant risks” to both offenders and the wider public.

In February, Working Links, one of the private providers, collapsed after four years of poor service and failing efforts to maintain a lossmaking contract.

The outsourced contracts were due to last until 2022 but Mr Gauke intervened last year to shorten the contracts, which will now end in December 2020.

Under the new model, the private sector will no longer manage offenders directly but will be able to tender to run training and rehabilitation courses worth up to £280m a year.

Each of the regions will have a private or voluntary sector “innovation partner” responsible for providing the courses. The Ministry of Justice will now begin a market-testing phase ready to bring the new contracts into effect in the spring of 2021.

“The model we are announcing today will harness the skills of private and voluntary providers and draw on the expertise of the [National Probation Service] to boost rehabilitation, improve standards and ultimately increase public safety.”

Probation services deal with more than 250,000 offenders in England and Wales, including inmates preparing to leave jail, ex-prisoners living in the community and those on serving community or suspended sentences.

Malcolm Rifkind
Why prisons should never be privatised 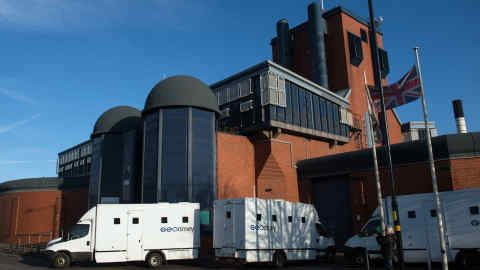 Dame Glenys said she was “delighted” at Mr Gauke’s decision, and noted that it had proved “well-nigh impossible” to outsource the work successfully.

She acknowledged that probation professionals would face yet more upheaval but anticipated they would be in “good heart” as a result of the changes.

Speaking on behalf of Interserve, MTC, Seetec and Sodexo, the businesses responsible for 17 of 21 community rehabilitation companies in England and Wales, Janine McDowell, head of justice services at Sodexo, said she was “disappointed” by the government’s decision.

“As well as increasing cost and risk, this more fragmented system will cause confusion as offenders are passed between various organisations for different parts of their sentence,” she added.

“We will now work closely with the government to minimise risks as the cases we manage are transferred to the National Probation Service.”

The companies were not given advance details of the justice ministry’s announcement.

“The government went ahead and implemented a model that had been criticised across the board for being unfit for purpose,” he said.

“We are obviously disappointed that there is an intention for some probation work to remain in the private sector. Napo will continue to campaign to ensure that all of these services and our members who provide them are eventually transferred back into the public sector.”

However Tom Sasse, a researcher at the Institute for Government, warned that the plans would not be an “instant fix”.

“The National Probation Service will face many of the same pressures that providers felt — and the changes will involve a significant transfer of cases, which will need to be managed carefully,” he said. “The NPS may also require extra funding.”

Get alerts on UK privatisation when a new story is published