From entrepreneurs to athletes: Six women to watch in Greece

For some of Greece’s most talented women, the financial crisis was a signal to migrate to jobs abroad. Others, though, saw greater opportunities at home. Below are six high-achieving women who are building the future in Greece.

A cabinet reshuffle in 2016 propelled Effie Achtsioglou, chief adviser to the minister for labour and social security, into the minister’s chair.

The 34-year-old employment lawyer worked closely with EU and IMF officials on restructuring Greece’s collapsing welfare system following years of cuts to pensions and social benefits. Despite her efforts, collective wage bargaining was put on hold while she was an adviser.

But following the country’s emergence last August from its third international bailout, the leftwing Syriza government’s youngest cabinet minister is now implementing a partial reversal of measures she worked on in her previous role.

Greece surprised its creditors in January by increasing the minimum monthly salary by 11 per cent to €650. Achtsioglou dismisses criticism that the move could prompt companies to switch to lower-paid part-time workers, pointing to a recent trend towards hiring full-time employees as an economic recovery gains momentum. “We’re acknowledging our debt to the workers of this country. The increase is a critical first step towards reorganising the labour market,” she says.

Collective wage bargaining has resumed and labour inspectors have become more active about investigating alleged irregularities at large Greek companies. Government spending on social welfare will triple in 2019, an election year, marking the first real increase for a decade. One government priority is to implement a new programme to cut child poverty, which rose during the financial crisis from 20 per cent in 2009 to 45 per cent in 2016.

Achtsioglou will run for parliament with Syriza, campaigning to build a modern social state in Greece. “We still have a long way to go,” she says.

As shadow education minister, Niki Kerameus is looking at ways to weaken the ministry’s grip on Greek universities if the centre-right New Democracy party wins a general election due in October.

The Harvard Law School-trained lawyer says higher education in Greece remains “inward-looking compared with the rest of Europe and much too centralised”. She cites a regulation requiring Greek universities to obtain permission from the education ministry to offer new graduate courses. When one institution proposed teaching a course in English on ancient Greek history and philosophy in response to interest from Chinese students, it was refused.

A 45-year-old constitutional ban on private universities in Greece makes it difficult to modernise the system, adds Kerameus. A decade ago, a conservative government attempted to reverse the ban but fell short of the additional parliamentary votes required to amend the constitution.

“We’re missing a huge opportunity for Greece to become an international centre for higher education,” says Kerameus. “Top Greek academics would have an opportunity to return home to work at non-state, non-profit universities.”

The leftwing Syriza government has taken an ideological approach to higher education, reversing a cap on the number of years students can remain at university without taking a degree; freezing a scheme to evaluate university teachers; and announcing mergers of dozens of vocational colleges with regional universities without commissioning feasibility studies.

Kerameus, 38, joined her family’s law firm in Athens after studying and practising law in Paris and New York. But after four years as a backbencher, she believes she is “on the threshold of a career in politics”.

Greece’s research institutes are full of potential entrepreneurs waiting to be discovered, according to Katerina Pramatari, a venture capitalist and associate professor at Athens University of Economics and Business.

Pramatari is a partner at uni.fund, a €30m venture capital fund whose backers include the EU’s European Investment Fund and Greek institutional investors.

After 15 months of operation, uni.fund has a pipeline of almost 30 early-stage investments. They range from an award-winning smartphone app for self-guided audio tours of Greek and Italian cultural attractions, to an internet-of-things monitor to ensure commercial coffee machines produce a consistently high-quality brew.

The 46-year-old says the partners have grown more optimistic about the Greek start-up ecosystem since launching the fund, mainly “because there’s so much hidden talent in university research departments that we can tap into”.

Pramatari interrupted her academic career in informatics to join Procter & Gamble’s European technology team in the 1990s, developing the consumer goods group’s first sales and marketing software. Returning to Greece as the dotcom boom took off, she launched an ebusiness start-up to sell fast-moving consumer goods online. “It was a good training in entrepreneurship,” she says.

Uni.fund provides pre-seed and seed funding up to €1m to its start-ups, along with mentoring aimed at transforming Greek scientific researchers into ethical entrepreneurs. Pramatari says it will take “perhaps five years to make the ecosystem self-sustaining and create successful companies”.

A men’s pole-vault contest was part of the first modern Olympics, held in Athens in 1896. But it was not until the Sydney Games in 2000 that women athletes were allowed to compete in arguably track and field’s most spectacular event.

Katerina Stefanidi, the current Olympic, world and European champion, took up pole-vaulting at the age of 10. The daughter of a triple jumper and a sprinter who both competed for Greece, she set four age-group world records before winning the world youth title in 2005, aged 15.

A shortage of government funding for athletics, in spite of the country’s heritage, holds back talented sports women at senior levels, according to athletes and Greek sports officials. Both sponsorships and professional trainers are scarce. As a result, few Greek women athletes participate in more than one Olympics. For a time Stefanidi lost motivation: she put on weight and dropped out of the top-50 in the women’s global rankings.

Winning a scholarship to Stanford University in the US, where she trained with Olympic silver medallist Toby Stevenson, revived her enthusiasm. In 2012, her final year, she won a US national college title. Four years later, she captured a gold medal in the Rio de Janeiro Olympics, clearing 4.85 metres.

With a degree in cognitive psychology, Stefanidi knows the pitfalls of overthinking on the runway. “The pole itself can be a scary object,” she says. At 29, she has one challenge left: to join a small group of female pole-vaulters who have cleared the five-metre mark.

About 150 women migrants and children take part in a daily round of activities — from Greek and English classes to cookery and painting — at Melissa Network, a support centre in a gritty central Athens neighbourhood.

Nadina Christopoulou, an anthropologist with a PhD from Cambridge university in the UK, co-founded Melissa (Greek for “bee”) four years ago with five women migrant community leaders already settled in Athens, just as the flow of new arrivals by sea from Turkey was gathering pace.

Funded by international and local donors, Melissa also offers a childcare programme, psychological support and an advocacy service for asylum-seekers. “It’s the first solid ground under their feet, a safe place where they can build trust and community, share their stories, talk about their hopes and aspirations, and start thinking about the future,” the 47-year-old says. “We’re not just a transitional space.” 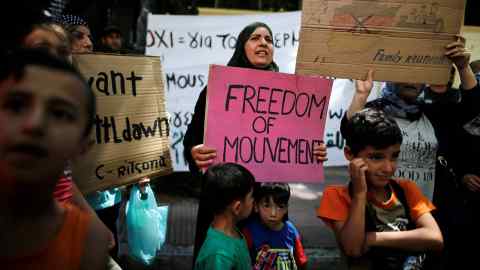 An estimated 1m migrants travelled from Greece to Germany before borders across the Balkans were closed in 2016, leaving some 50,000 refugees and asylum-seekers trapped in the country.

Melissa is a haven for vulnerable women and children, mostly from Syria, Afghanistan and Iraq, living in sparsely furnished apartments or converted shipping containers in camps around the Greek capital. “The focus is on their strength and resilience, and their boundless potential,” says Christopoulou.

For Suha, a Palestinian asylum-seeker from Syria with four children, Melissa provided a part-time job cooking for unaccompanied girls at a shelter and a caring space for her children when school was over. “It’s been a lifeline for us,” she says.

Anna Damaskou’s brief from anti-corruption watchdog Transparency International — to research the lack of whistleblowers in Greece — helped steer the UK-trained expert in financial criminal law and banking compliance in a fresh direction.

Her study of three big scandals for the non-governmental organisation — a wiretapping case at telecoms group Vodafone’s Greek subsidiary, mismanagement of a project to build new submarines for the Greek navy, and a social security fraud run by officials at the state pension fund — showed “a large number of employees in each case had known about the illegal activity for a long time but were afraid to report it”, she says.

Partly as a result of Damaskou’s work, a centre-right government in 2013 approved Greece’s first law to protect whistleblowers. Four years later, after taking over as chair of Transparency International’s Greek chapter, she campaigned for loopholes in the law to be closed.

She cites the case of a woman who denounced corruption in her workplace, “only to be hit with lawsuits for defamation and other alleged offences not specifically covered by the legislation”.

Although Greece is the lowest-ranked EU member state in Transparency International’s annual corruption perceptions index, Damaskou believes progress was made in reducing corruption during the country’s financial crisis, especially at local-government level.

The 41-year-old warns, however, that unless Greece becomes more effective at cracking down on graft, “the country won’t fully recover from the financial crisis or succeed in modernising its institutions”.

Can the brain drain be stemmed?

An estimated 260,000 young Greeks with university degrees decided to look for work abroad during the financial crisis years, many moving to other EU countries or the Gulf.

The outflow continues, driven by lack of opportunity at home: unemployment, while falling, remains above 18 per cent. Some graduates, though, are returning, led by IT specialists who are sought after by Greek companies upgrading their operations.

Will the outflow be reversed? Not in the near term, says Manolis Pratsinakis, a researcher at Oxford university studying the Greek diaspora. “We can expect significant migration to continue, but much will depend on developments in the Greek economy,” he says.

Before the crisis, many young Greeks saw migration as a temporary move to boost their skills. Now they want to stay abroad longer because of a lack of opportunities at home. “A 2017 study showed fewer than 10 per cent of post-crisis migrants planned to return to Greece in the next three years,” says Pratsinakis. “But 60 per cent wanted to return in the longer term.” 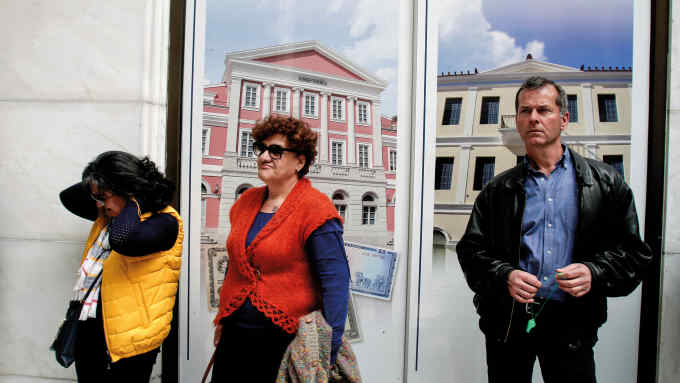