How a five-day business course changed a life

Pádraig Ó Céidigh has a thing about rabbits — the metaphorical kind.

“You cannot chase two of them at once,” he says, while admitting he has spent much of his life and career “chasing absolutely loads — often other people’s as well as my own”.

A serial entrepreneur, politician, solicitor and former teacher, Ó Céidigh is best known as the former owner of Aer Arann, the Irish airline that almost went bust in 2010 amid sky-high fuel costs and following a lengthy price war with Ryanair.

He left in 2012 after helping to steer the business out of examinership — the Irish version of Chapter 11 bankruptcy protection in the US. What followed was an appointment to Ireland’s upper house, the Senate, and a high-profile role leading a committee that reported in April on the emotive issue of whether Irish households should pay for excessive water use. In his spare time, he is buying up nursing homes.

For Ó Céidigh, however, this portfolio of roles represents a significant concentration of focus compared with what he was doing several years ago.

A heart attack in 2012, during which he says “my heart stopped and I truly went over to the other side”, was partly the result of overwork. Yet after recovering, he quickly stacked up community and corporate commitments that were “all over the place”, he says, ranging from a job on Ireland’s tourism board to seats on the boards of Ireland’s national sea fishing body and state broadcaster RTE.

He was clocking 90-hour working weeks when salvation came in the unlikely form of yet another job offer — this time to develop a leadership course for YPO, the global chief executives’ association. As was his habit, he said “yes, that would be interesting”, he explains.

To understand what he would need to do, he enrolled on the High Performance Leadership programme at IMD, the Swiss business school. He says the experience, although it lasted just five and a half days, was to change his life.

He gained “a deeper perspective on my life and who I am and what I am about”. The few days were pivotal, Ó Céidigh says, because as a result “I am more focused.”

After the course in 2015, he quit his tourism role, the fishing board, RTE and multiple other commitments. The jobs were too numerous for him to achieve much, he says, adding: “You cannot make a difference if you are chasing too many rabbits.”

When he received a phone call one Friday night last November from Simon Coveney, minister for housing, planning, community and local government, who invited him to chair the Oireachtas (parliament) committee on water charges, he signed up in the knowledge he could “concentrate primarily on this role and do my absolute best to get it right”.

So how did a few days at IMD’s Lausanne campus help the overworked and under-focused Ó Céidigh overhaul his work and personal life? It was due to the elements of “psychotherapy and psychology”, he says. “The IMD course helped me dig deep into myself and ask myself what is important to me and what I want to achieve.”

The programme, he explains, was not the usual business school fare of “case studies about Sir Alex Ferguson or Elon Musk”. Ó Céidigh, whose experience bringing Aer Arann back from the brink is in fact a case study for Harvard Business School students, found the IMD experience more about talking than textbooks. “You are your own case study,” he says.

Before the course, he says, he had to identify his three biggest successes in life and his three worst failures. He also had to write out what he perceived as his timeline, recording his major developmental and turning points and how he felt at each.

In Lausanne, small groups of students discussed each other’s timelines. “We broke up into groups of six or seven people with a coach who brings everyone through [each student’s] process,” he says, “in what was basically our own mentoring group where everyone shares their life stories.”

Ó Céidigh, who taught secondary school for 10 years and also practises mindfulness on a daily basis, found the group discussion and introspection enjoyable. More traditional business leaders who spend their time directing and assessing others might find it less easy. “It is a really deep dive into yourself,” he says. “Like throwing off all your clothes and you are there, stark naked, saying ‘what am I made of now and who do I want to be?’”

Current Current chairman of Ireland’s Oireachtas Committee on the Future Funding for Domestic Water. Owner of nursing homes and 100 per cent owner of Aer Arann Islands, a small airline.
Previous founder and chairman, Aer Arann
1994 bought Aer Arann with partner Eugene O’Kelly, funding the purchase by remortgaging his house in Galway, Ireland
1980s retrained as a teacher and taught maths at a Jesuit secondary school in Galway. Then retrained as a solicitor
1979 graduated from university in Galway and joined KPMG

None of this will shock participants, however. IMD’s course brochure says it involves “self-awareness and ‘mind’s eye’ exercises”.

Something else Ó Céidigh learnt to do on the IMD course was to identify what he calls his “secure base”, which he says could be “your family, the key people around you, while there are also people that are destabilising”.

“IMD gets you to look at that in both your personal and your professional life,” he continues. “Both are totally interactive, you see. It is all integrated.”

Last year, Ó Céidigh attended a second short course at IMD, led by the same programme director, George Kohlrieser, who besides a solid academic background is a former hostage negotiator. “We were in the mountains in Switzerland and took over a smallish family hotel there,” he says of the second course — IMD’s Advanced High Performance Leadership programme. “We walked the mountainside and had one-on-one reflective time and one-on-one coaching.”

After his water committee job, ​Ó Céidigh says, he will return to acquiring care homes and running Aer Arann Islands, a small airline he owns 100 per cent of, which was formerly part of Aer Arann group. He is convinced what he learnt at IMD will make him a better manager of the 300 staff he oversees at his businesses because he will now have more focus. 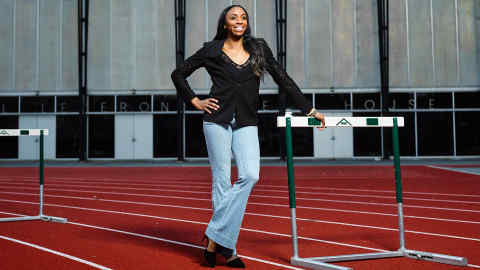 He says of running Aer Arann: “I was on top of everything and everyone came to me with their issue. They would circumvent delegation and come to me and I would try and help them with things like mortgages and loans,” he says. “Someone once went through a separation and I helped her get a solicitor.” He had, he says, “created that situation where you allow yourself to run after other people’s rabbits”.

Now, he says, he will help staff identify and nurture their own “secure base”. This, he believes could be a crucial management tool — boosting recruitment, retention and productivity.

As for the rabbits, he is determined to let them scamper away. “If your focus is too big and too dispersed, you miss things,” he says. “I need to be more into keeping that big picture perspective and now I think I can.”