On the most important policy issues, Leave supporters disagree over what to do

The campaign to leave the EU made a handful of specific policy promises before its historic triumph in Thursday’s referendum. But when it comes to the most important policy issues confronting the UK, Brexiters disagree on what to do. It may well be hard to strike a workable consensus in parliament now the country has voted to leave.

Membership of the EU brings with it specific agreements on trade, free movement of people and a host of rules and regulations. Those who voted to leave have concerns about such issues and believe the government will now address them.

But prominent Leave campaigners advocated very different policies from one another — on immigration, trade and regulations. The precise mandate of the winning side is elusive; putting the people’s will into action will be a political challenge with few precedents in recent history.

“Taking back control” of immigration was a key refrain as the Leave campaign headed to victory. An exit from the EU frees the UK government to reform two main aspects of immigration policy (more specifically, policy towards EU migrants): what type of people are allowed to come, and how many.

The main proponents of Brexit seem to be agreed on the first issue: there should be an Australian-style points system, admitting only those with the skills that the UK needs and applying the same rules to non-EU migrants as EU migrants.

But it is less clear whether this new policy will result in significantly fewer immigrants overall.

Boris Johnson, the former mayor of London and spokesman for Leave, has said he is “pro-immigration”. Priti Patel, another of Leave’s chief Conservative backers, has suggested that new immigration policies would allow more south Asian chefs to enter the UK. Prominent pro-Brexit business leaders, such as James Dyson, have also said looser restrictions on hiring skilled workers from outside the EU were one of the attractions of voting to leave.

But other proponents of Brexit have pointed to what they characterise as an unsustainable burden on housing and public services, and a downward pressure on wages supposedly caused by the current volume of migrants. This is a view perhaps most starkly conveyed by Nigel Farage’s “Breaking Point” poster, which showed what appeared to be a long queue of migrants seeking to enter Britain (in reality they were asylum seekers in the Balkans).

FT Post-Referendum Briefing
What next?

FT journalists will be discussing what’s next for Britain and the EU, on Monday June 27, in London. Find more details here.

The aim of radically reducing migrant numbers was also suggested by Michael Gove, the justice secretary, who said this month that a post-Brexit government “would in due course bring [net migration] down to tens of thousands” — the commitment made in the Conservative party’s 2015 manifesto. Such an objective would require a significant reduction not only in EU migration but also non-EU migration. Net migration from outside the EU stood at 188,000 in 2015.

New trade arrangements need to be drawn up with all countries. As well as changing its trading relationship with other EU members, leaving the bloc means the UK loses access to the EU’s trade treaties with about 50 other countries. But it frees the UK to negotiate new deals with those countries and with others that are not yet covered by EU agreements.

Trade agreements will be needed for services as well as goods. A key question is whether the UK retains passporting rights into the EU for financial services. At present only members of the European Economic Area have such rights, which allows them to market products throughout the region. Without such rights, providers of financial services based in the UK may be forced to move some of their operations to another European centre.

Some proponents of Brexit, such as Daniel Hannan MEP and the Adam Smith Institute, a think-tank, have advocated joining the EEA or agreeing bilateral trade deals similar to the one Switzerland has struck with the EU. However, the prominence in the campaign of pledges to “take back control of our borders” seems to rule out such options: continued membership of the single market would mean accepting free movement of people.

Mr Gove said explicitly last month that such arrangements would not be considered.

Mr Johnson has favoured a Canadian approach. Canada has agreed a trade deal with the EU that removes virtually all tariffs on goods but crucially excludes most services. Since services make up 80 per cent of the UK’s economy, and two-thirds of the UK’s exports to the EU, any agreement reached on services will be particularly important.

It is reasonable to assume that the UK would be able to negotiate a free trade deal with the EU for goods trade as it already complies with current regulations and there are no tariffs in force at present. How quickly that can be done — and what agreement can be reached on services — will depend on the political appetite in the rest of Europe. 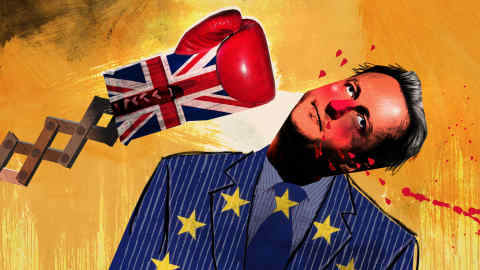 “Do you seriously believe that [the EU] would put up tariffs against UK produce of any kind when they know how much they want to sell us their cake, their champagne, their cheese from France?”, said Mr Johnson, implying that the threat of new tariffs from the UK on EU imports would be sufficient to ensure that the EU offered a good deal.

But Mr Johnson’s position contrasts with the suggestion from some Leave supporters, such as Lord Lawson, the former chancellor, and Patrick Minford, the economist, that all tariffs should be removed unilaterally, even if the EU and other countries do not reciprocate.

A unilateral approach poses two difficulties. By removing all tariffs without requiring similar concessions from other countries, the UK would reduce its bargaining power in future negotiations. Even if politicians are happy to give this up, “no [World Trade Organisation] member can unilaterally decide what its rights and obligations are”, said Robert Azevêdo, the WTO’s director-general. In other words, unilaterally falling back on WTO rules is not as quick and simple as some have suggested and would still require agreement from the other 161 member countries.

Unilateral free trade might also be at odds with Vote Leave’s desire to protect British industries such as steel.

In the run-up to the vote, the Leave campaign highlighted costs imposed by EU regulations as an important reason for leaving the bloc.

However, it is not clear exactly which regulations will be rescinded. The UK is one of the most deregulated economies in the world, according to the OECD. The most costly regulations are those under domestic control — in particular, those concerning planning.

Some supporters of Leave, such as Mr Hannan, are excited about the prospect of transforming the UK into a Hong Kong-style deregulated economy. Mr Minford’s forecast of a significantly stronger UK economy outside the EU is predicated on abolishing regulations relating to, for example, working hours, gender equality and climate change.

However, the official Vote Leave campaign was quick to dismiss suggestions that Brexit would result in a watering down of workers’ rights. Andrea Leadsom, an MP and prominent Brexit supporter, said: “In the area of employment law I wouldn’t expect to see deregulation.”

Vote Leave made three specific pledges during the campaign. All groups that are at present set to receive money from the EU will continue it do so, at least until 2020 — including regional development funding, support for farmers and grants for scientific research. The National Health Service will receive an extra £100m a week by 2020 and value added tax on household energy bills (and tampons) will be removed.

Some voters supported Brexit’s winning campaign because they want to transform the UK into a more open, deregulated economy with minimal trade barriers. But this vision is at odds with those who voted Out to control immigration, boost the wages of the low paid and protect British industry and agriculture.

As MPs take up the baton from the electorate, at issue is which vision of a post-Brexit Britain prevails. There are no easy answers to reconciling the different visions for Britain’s future. The referendum is now history, but the debate is far from over.