The 60-tonne granite statue of former Chinese official Xi Zhongxun in a park covering an area the size of 40 football pitches near Xi’an in central China leaves visitors with a clear impression that he held a top place in the pantheon of communist leaders.

Only a handful of Communist party officials are honoured with similar memorials, and all of them held more senior posts than Xi Zhongxun, who served a single term in the party’s elite politburo in the 1980s. But his son, President Xi Jinping, has reached loftier heights.

The memorial was barely the size of one football pitch when completed in 2005, but the park surrounding it grew rapidly after Xi Jinping was anointed two years later as the heir to the Communist party’s top post.

Once his son took the position in 2012, an official biography, TV series and even a series of postage stamps honouring the elder Xi followed.

Few were surprised that Xi Jinping was the subject of the largest painting at an exhibition at China’s national art gallery this month marking the 40th anniversary of the country’s opening to the outside world. He has dominated Chinese media coverage for the past five years while centralising power to a degree not seen in decades and opening a possible path to lifetime rule.

But more unusually, his father was the main figure in the exhibition’s second largest work, which portrayed him lecturing former paramount leader Deng Xiaoping on economic reform.

“It’s all to do with the fact that the son is now the emperor,” said Warren Sun, an expert in Communist party history at Australia’s Monash University. Propaganda efforts are “trying to promote Xi Zhongxun as one of the most important leaders during the post-Mao period”, he added.

Mr Sun said the promotional efforts could mainly be the result of lower-level officials attempting to curry favour with the president. Xi Jinping has apparently not visited the memorial in Shaanxi province’s Fuping County — about 1,000km south-west of Beijing — since 2005, when he carried his father’s ashes there following his death in 2002, aged 88.

But that has not prevented the site, declared a “national patriotic education demonstration base” in 2015, becoming a place of pilgrimage. Schoolchildren and officials from as far afield as Tibet have visited to bow before the statue, according to state media. The amounted invested has not been disclosed.

The monument is surrounded by airport-like security, with metal detectors, multiple surveillance cameras and security officers watching over visitors, who circle in reverent near-silence.

“I feel very respectful,” said a factory owner surnamed Xu, who was visiting the site with friends.

A two-storey museum nearby highlights Xi Zhongxun’s early life as a young communist revolutionary. His decade-long exile following a Communist party purge in 1962, and the Cultural Revolution that saw him paraded in public as an enemy of the people, is dealt with in just three photographs.

Instead, a large exhibit presents Xi Zhongxun’s period as the top official in Guangdong province, where he oversaw the creation of an export-processing zone in Shenzhen, then a small city of 300,000, which grew to become one of China’s richest and largest metropolises. “I have never done anything to let down ordinary people, and when others have bullied the people, I did not obey,” a plaque quotes Xi Zhongxun as saying.

Although reliant on the approval of party elders, historians said Xi Zhongxun was instrumental in creating a model for the more market-driven economy that has been the key to China’s decades of growth.

But a short walk from the park showcases one of the least attractive elements of that development model. 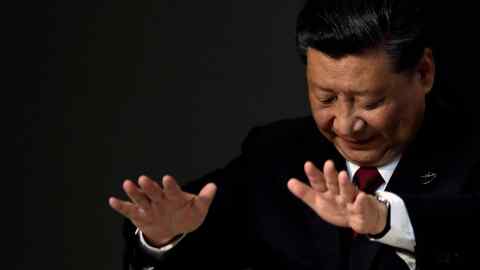 The growth of cities such as Shenzhen has involved a huge transfer of assets from villages to local governments. Almost half of Chinese villages have lost some or all of their land in the period from the late 1990s to the early part of this decade, according to a survey by land rights NGO Landesa. Farmers were on average paid a “fraction” of the $740,000 per acre price authorities themselves received, it found.

Residents of villages surrounding the park said that they received Rmb108,000 ($15,800) per acre from the local government for an 18-year lease on land for the development a decade ago. “The government set the price, and there was no negotiation,” said one farmer, who asked not to be named for fear of reprisal.

“It’s clearly not enough for 18 years,” said another farmer, who leased half an acre — previously used to grow corn and cabbages — to the government, receiving about Rmb50,000. “We no longer have any farming income,” she added.

The land requisitions continue this year as local officials attempt to attract more visitors to the park, and a training school for party cadres is built next door.

Officials in Fuping did not respond to requests for comment.

Hastily collecting furniture from his cottage, before it is demolished in a road-widening project, a farmer named Dai said compensation of Rmb100,000 would only cover half of his new house’s construction cost, far short of the land’s value. “There’s nothing we can do,” he added. “Farmers are always last.”

This article has been amended to clarify that Xi Zhongxun served one term as politburo member.