Jordan Roth’s office, in the heart of Broadway, is not a stereotypical executive’s lair. There is a large illuminated “THEATRE” sign instead of conventional office artwork; white walls bear no trace of memorabilia from his education or career; and a rectangular conference table that seats eight. “The only thing a desk is good for is collecting stuff and separating people,” says the president of Jujamcyn Theaters, one of New York’s three big multi-theatre owners.

Nor is Roth a stereotypical executive. Now 41, he is the youngest theatre owner on Broadway by more than a decade. He produced his first Broadway show at the age of 25 and became president and co-owner of Jujamcyn Theaters in 2009 aged 33 (he is now the majority shareholder). He oversees 500 employees and five of Broadway’s 40 theatres in addition to producing several shows and being involved in non-profits and personal projects.

Roth does have a small standing desk next to a set of drawers where Tony and Olivier awards and photographs of his family are displayed. Above it is a whiteboard showing no hint of use. Clutter is not in his vocabulary. Roth calls his room’s look an “edited palette”, an aesthetic that has evolved over time.

“There’s a time in your life where you want to see the physical representation of everything that you’ve ever done or touched,” he says. “You may come to that part of your life midway, or later down the road, or you may start there and want to evolve to an edited palette,” Roth says. “I’m in edited palette phase. Welcome.”

Reflection and evolution, from office aesthetics to lifestyle to leadership style, are important parts of what has made Roth successful. He has a quick wit and speaks with bursts of energy when inspiration hits. But for a man juggling many roles, he is anything but frenetic. Taking time to think through changes in life seems to be his constant. “I enjoy the grapple,” he says. “You know what? It doesn’t even matter if I enjoy it. It is who I am. It is how my brain works, it is how my heart works.”

Roth grew up in New York City attending Broadway shows. It is a family tradition — his mother, Daryl Roth, is a Tony award-winning Broadway producer. (His father, Steven, is a billionaire property investor.) Roth knew early in life that he wanted to work in the theatre, but it was not until after college that he considered going into the business side of the industry instead of performing.

A friend invited him to a workshop about an adaptation of Shakespeare’s A Midsummer Night’s Dream told entirely through disco music that was showing in New York at the time. “I went to check it out, fell in love and started imagining it in a different space with enhanced costumes and a larger cast and I realised I was producing it in my head,” Roth says. “Soon I was producing it in reality and that became my first show, The Donkey Show.” It ran for six years.

Roth knew he wanted to go to business school at some point, given his longtime interest in the nexus of art and commerce. While he had experienced success as a resident producer at Jujamcyn before going to Columbia Business School in New York, he felt like he was missing some “hard skills”.

Roth started at Columbia in 2009, while vice-president at Jujamcyn. Many in his position would have chosen to do an executive MBA, but he decided to do the full-time MBA programme to get the complete experience. He wound down his projects and worked out a schedule so that he could spend blocks of time in class.

But while Roth had plans to keep his work and school schedules manageable, not everything can be predicted. After the first of the two years, Roth’s predecessor at Jujamcyn was tapped to run the National Endowment for the Arts, the funding body, expediting the process in which Roth would take over the company. He was announced as the president of Jujamcyn on the first day of his third term at business school.

“We sent out the release, I did a bunch of interviews and then I went to class,” he says. “That actually turned out to be insane, but perfect.”

Being president of a company while an MBA student meant that Roth could take concepts from the classroom and use them in the office right away. He credits business school with shaping his leadership style, entrepreneurship and role at Jujamcyn. “The big win for me was time and input around what is it to lead — what are each of our individual points of view about the kind of leader we want to be,” he says.

He asked himself: “What kind of a culture do I want to work in and how do I create it if I’m not working in it right now? These are not the everyday 15 meetings and 17,000 emails and 400 phone calls kinds of thoughts.

“They require time and guidance and input — input from others and input from readings, from lectures, from ‘let’s look at other companies’, input from peers. And then all of that is funnelled into your own head and heart and soul and self.”

One aspect which Roth started to work on almost immediately after graduation was transforming the company into a service business and perfecting the “kerb to kerb” experience. “It’s everything that happens, starting down the street as you approach this building and what it looks like and the lights that are shimmering and the energy under the marquee,” Roth says. “You can take that journey and you can feel horrible, you can feel neutral or you can feel like ‘Wow . . . this is special. I’m about to see something extraordinary because I feel like I am in the place to be.’ That’s a business that delivers experience.”

Roth says that transforming the company to think of itself as a service business and getting everyone to think that way was a big lift, and business school gave him the tools to make it happen. “I thought [I went to business school] for the hard skills. As it turns out, what I most value are the soft skills,” Roth says, though he quickly adds that he hates categorising skills as “soft” because they can be both important and difficult to master.

Roth says that while his personal projects were not ideas from his time at business school, there is something of his MBA education and the entrepreneurial spirit it fostered in everything he does. In 2014, he launched Culturalist, a website where users can create, debate and share top 10 lists. Last year, after live-streaming app Periscope began gaining popularity, he launched #MakingMondays, an online show (now also on Facebook Live) at his West Village home in New York, where viewers can help Roth and his artist friends create spontaneous and ephemeral performances and artworks in real time. He is also about to launch and star in an online “cultural commentary comedy show” called The Morning After with Jordan Roth.

As well as his entrepreneurial pursuits, most recently Roth’s life has been in transition again. He and his husband, Richie Jackson, have a new baby boy, Levi, who was born last July. Since then, his life has changed “a ton”. “By design,” Roth says. But just like business school almost a decade ago, Roth prepared early and is embracing the new. 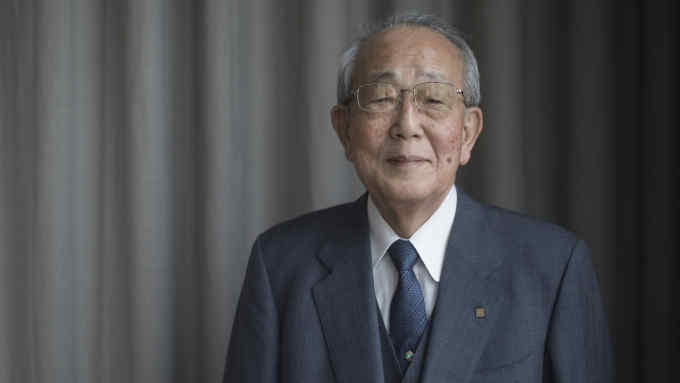 Companies do more than just generate profits for shareholders. In these interviews, chief executives talk about how they found their mission.