The joy of geraniums

The most loyal of companions, the pelargonium is an enduring symbol of strength – and source of solace

Is there anything more joyous than geraniums? Bright, resilient and utterly undemanding, these pleasers of the botanical world are surely the flora for our times. “Geraniums are the no-brainer gift that keeps on giving,” says the florist Kitten Grayson. “As long as you deadhead them, they’ll flower continuously and last for years. Technically, you can keep them for centuries.”

In the 19th century, this longevity won geraniums a reputation as the steadfast companions of solitary women – consorts held so dear their cuttings were called “daughters”. Now, they are firmly back in fashion. Grayson is working on an idea to host a geranium workshop as part of a British-houseplant series. “The older they get, the more wise and wonderful-looking they become,” she says. “They’re like these beautiful, gnarly old creatures with unique personalities.” For John Derian, the gnarlier, the better. “I think geraniums are such fascinating plants,” says the American designer and retailer. “I love letting them go wild and crazy. They’ll grow four feet high and circle and loop and drop. They basically do tricks.”

Derian’s Massachusetts home is inhabited by towering soft pinks and vermilion reds that have garnered their own cult social-media status – and Derian a reputation as “the god of geraniums”. Besieged by requests for care advice from friends and followers, he sums up his laissez-faire approach to them as: ignore, sun bake and water once-weekly.

“It’s funny, before I moved to Cape Cod I was a total plant killer,” he says. “This house loves a geranium. They’re basically fuelled by Provincetown light.” The appeal for Derian lies in the plant’s enduring familiarity. “The geranium in a terracotta pot is such a classic image that we all have a connection to,” he says. “It brings life, but it’s also so familial.” The distinctive bloom adorns some of Derian’s most popular designs: from his découpage piece inspired by a large-scale image of a 19th-century specimen that’s long decorated his studio wall, to the blue geranium that embellishes his collaborative ceramics with the Parisian brand Astier de Villatte. When he began working with the paper-flower maker Livia Cetti of The Green Vase, the result was a common geranium. Landscape architect Miranda Brooks was their first buyer. Seven years on, it remains Cetti’s bestseller.

Part of a wider houseplant revival, for some the geranium has never been out of style. “Geraniums have been in my life for 40 years,” says Carole Bamford, whose Daylesford House, in Gloucestershire, includes a geranium greenhouse that’s home to 112 varieties, including her best-loved Attar of Roses. Aromatic and uplifting, bringing soft, subtle colour, with textural leaves that have a sculptural quality, the rose geranium has become the signature scent of the Bamford beauty brand. It was the first blend created for it and remains its top seller more than a decade later.

For Bamford, it’s a scent that signifies nostalgia. “I remember using a little green bottle of Floris’s Rose Geranium in the bath as a young girl. Just a few drops and the smell would permeate the house,” she says. “It represents home for me.” Bamford brings her own beloved specimens into the house during the summer, and busies herself with cuttings and potting in the autumn. She’ll even use them to make scented sorbets and ice creams. “Geraniums are such gentle things. I love the fact that they’re not smart or showy. Unlike an orchid or a peony, they’re subtle. But they bring endless pleasure.”

Beyond its understated aesthetic and dominance within the beauty industry, the geranium has long been thought to have medicinal qualities. Largely derived from South Africa, what most of us know as the geranium (named for its resemblance to a crane’s head) is in fact a pelargonium (meaning stork) – the debate on whether they should be a separate species rages on. As a traditional medicinal plant, it was used as early as the first millennium to treat everything from dysentery to liver problems. According to The Gardener’s Companion to Medicinal Plants, the perennial Pelargonium reniforme “is the subject of current scientific interest” as a remedy for respiratory infections. “Studies suggest roots and their constituents have antibacterial and antiviral properties and may aid the immune response.”

Records of the plant’s use in Europe can be traced back to the late 1500s, and in the 1690s London’s Chelsea Physic Garden was one of the first to cultivate pelargoniums in Britain, with the hope of better understanding their medicinal powers. In its heady early days on British shores, the geranium was coveted among aristocratic 18th-century collectors who created greenhouses to mimic exotic climes. Their image covered everything from fabrics to ceramics, and they were as prized as jewels. In 1772, George III even hired a dedicated plant hunter to bring back special specimens.

“People who don’t like geraniums are often very disdainful of them as brash and disposable, but early on they were treasured and cultivated,” explains Cambridge academic Kasia Boddy, whose 2013 book Geranium charts their rise and fall from favour (a history she revisited in last year’s Blooming Flowers). “There’s a lot of snobbery around certain plants, and the fact that geraniums are unfussy is seen by some as a sign that they’re not special enough. They’ve become this symbol for the ordinary.”

Yet it’s their very ordinariness that attracts creatives – including the late Derek Jarman, who embraced their commonality, and whose earliest memories of the colour red were defined by their striking spicy hue.

The scarlet geranium has long been a harbinger of hope. “In the Victorian era, potted geraniums were a shorthand for rural cottage life,” says Boddy. “It was a reaction to the rapid movement of people from the country to the city. The durability of the geranium meant they brought cheer and colour even in dark, foggy Victorian London.” Today, when finding escape in nature is at its pandemic-induced peak and the term “cottagecore” (an internet-derived aesthetic romanticising imagery of rural life) has entered the lexicon, it’s little wonder that geraniums are a source of solace again. They’re a simple shortcut to elevating the everyday. Designer Matilda Goad, for example, gathers their scented leaves when trimming hers, infusing them in boiled water to create an ironing spritz to perfume her bedsheets.

Perhaps it’s their uncomplicated nature that really resonates. “They have this aura of innocence,” says the Connecticut ceramicist and plantswoman Frances Palmer. “They’re domesticated and approachable, yet very elegant.” On a visit to Charleston, the Bloomsbury Group home in Sussex, she fell for a pair of geranium-filled containers flanking the garden’s entrance. “I just loved their shape – imperfect and a little funky,” she says of the handsome Cycladic silhouettes that first compelled her to take up ceramics. “The Bloomsbury Set loved the geranium,” she says. “And painted them often – they’re all over the house at Charleston.” For an artist’s studio in an Upper East Side townhouse in 2019, Palmer created a set of giant Charleston-inspired geranium urns in terracotta to deck its windowsills. Grecian and brimming with zesty blooms – the effect was enchanting. Just the jolt of joy our spirits need.

Explore the series
READ MORE
A Japanese calendar of flowers 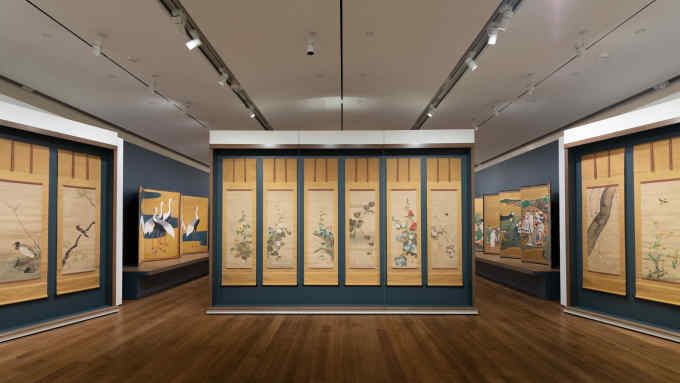