GDP growth of 0.1% is one-quarter of the UK rate as a whole

Sign up to myFT Daily Digest to be the first to know about Scottish National Party news.

Scotland’s Nationalists like the idea of divergence from the rest of the UK — but not of the sort displayed by data showing the Scottish economy growing just a quarter as fast as the UK as a whole.

Third-quarter gross domestic product data on Wednesday posed questions about the resilience of Scotland’s economy and could have political and constitutional implications in the febrile aftermath of the 2014 independence referendum.

The Scottish National party is on course to win a landslide victory in May’s Holyrood parliamentary elections, despite the collapse in oil prices that has made a mockery of its pre-referendum fiscal forecasts and is causing increasing pain among companies supplying and serving the energy industry.

Scottish onshore GDP grew just 0.1 per cent in the quarter from the previous three months, compared with the 0.4 per cent achieved by the UK as a whole, a divergence blamed in large part on the oil price fall.

Brent crude fell again yesterday, adding to a near 19 per cent fall in prices over the first seven trading sessions of this year.

BP and other international oil companies have announced hundreds of job cuts in its North Sea-related operations in and around the former energy boomtown of Aberdeen, and analysts and businesspeople say the impact is spreading into the wider economy.

Scotland had already underperformed in the second quarter of 2015, with growth of 0.1 per cent trailing the 0.7 per cent recorded then for the UK.

“Quite clearly the Scottish economy is diverging from the rest of the UK,” said Professor Brian Ashcroft of the University of Strathclyde’s Fraser of Allander Institute. “It’s largely driven by the low price of oil.”

The estimate of Scottish GDP does not include offshore North Sea activity, and if Scotland’s geographic share of oil industry output was also included it would make the gap with overall UK performance wider still.

After years of trying to find a site, Ness finally opened in Aberdeen in October — but sentiment was suffering in a city where residents are highly sensitive to the energy sector’s fortunes, he said.

“They check the oil price every day [when] the alarm clock goes off,” Mr Baillie said. “It’s perhaps a bit quieter than we’d hoped.”

Expansion in construction, buoyed by public sector works such as a new bridge over the Firth of Forth, helped shore up Scottish growth. But services grew more slowly than in the UK as a whole and manufacturing contracted 0.1 per cent.

Economist John McLaren of the University of Glasgow’s business school said construction’s contribution would decline as large projects wound down.

“If this activity is not replaced by higher output elsewhere, then the overall growth rate of the economy could fall to closer to 1 per cent a year than the 2 per cent average we’ve experienced over the last couple of years,” Mr McLaren said.

Scottish and UK ministers sought to accentuate the positive in the data, which showed the economy had enjoyed three years of continuous expansion. 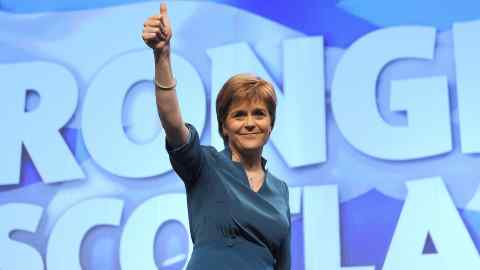 But John Swinney, Scotland’s finance secretary, acknowledged there were “significant challenges” including a slowdown in global demand.

“[This is] a situation exacerbated by the continuing low price of oil and the effect this is having on the industry and its supply chain,” Mr Swinney said.

Mr Swinney and his SNP colleagues have shrugged off reminders that the collapse in oil revenues would have meant a severe fiscal crunch if Scotland had, as they hoped, been set to become an independent state on March 24 this year.

BP is cutting 4,000 jobs across its exploration and production business, in a further round of cost cutting as oil companies continue to feel the pain of a plunging oil price. Matthew Vincent asks Chris Adams, FT energy editor, how the industry is standing up to the tough market conditions.

The problem is that the balancing effect appears to be weaker than expected, and with no appetite for tax cuts the devolved Scottish government has limited ability to boost growth in the short term.

Professor David Bell of the University of Stirling said that an ongoing effort to model the Scottish economy found that in “nearly all” simulations it would grow more slowly than the UK as a whole over the next few years.

That would mean unprecedented increased impact on the finance available to the SNP government because of planned devolution of tax powers from London.

“This is likely to lead to relatively slower growth in income tax revenues in Scotland compared with the UK as a whole. And this will put downward pressure on the Scottish budget,” Prof Bell said.