Sign up to myFT Daily Digest to be the first to know about Salah Abdeslam news.

A manhunt is under way as two brothers were named as suspected suicide bombers responsible for co-ordinated attacks in Brussels that killed at least 30 people and injured hundreds more.

Belgian broadcaster RTBF has named Khalid and Ibrahim El Bakraoui as two of the men photographed by CCTV at Zaventem airport.

Citing intelligence from the police, it said the two brothers were known for serious criminal activity but not for any connection to terrorism. One of the men had rented an address under a false name in the Brussels district of Forest, which was the scene of a gun battle last week, it added.

A third man caught on camera alongside them, dressed in a white jacket and a hat, was the subject of an active manhunt.

Belgium was on Wednesday starting three days of mourning for the victims of the attacks, including a minute’s silence to be held at 11:00 GMT.

Two explosions ripped through the check-in area at Brussels’ Zaventem airport, north-east of the EU’s capital and a few miles from Nato’s headquarters shortly before 8am on Tuesday. A third device at the airport failed to detonate and was later dismantled by police.

Then a little more than an hour after the initial attacks, another blast ripped through a metro carriage at Maalbeek station in the heart of the district dominated by EU offices, killing at least 20 people. Belgian media reported 14 deaths at the airport, citing staff at hospitals.

Just four days after police raids in the city had produced an apparent breakthrough in efforts to curb Belgium’s jihadi networks, the Isis attacks revealed an even deeper layer of operational capability for the terrorists in Europe than previously assessed, intelligence officials say.

The bombings came just a day after Jan Jambon, Belgium’s interior minister, warned that jihadis could be looking for a way to retaliate for the arrest last week of Salah Abdeslam, the suspected logistical planner of November’s Paris terror attacks.

“This kind of attack couldn’t really be organised in any less than four days and it would usually be weeks in the planning,” said Matthew Henman, manager of IHS Jane’s Terrorism and Insurgency Centre. “It’s certainly possible it was accelerated by the arrest of Abdeslam, but there must already have been an attack plot and capability that was close to fruition.”

Isis made a series of claims of responsibility for the attacks in a phased manner that experts saw as evidence of co-ordination between the perpetrators and Isis central operations in Syria.

Belgian prosecutors on Tuesday evening said that a search in the Brussels neighbourhood of Schaerbeek had uncovered an explosive device with nails as well as chemicals and a flag of Isis.

Belgium has been on alert since many of the perpetrators of last year’s attacks in Paris were linked to the poor Brussels neighbourhood of Molenbeek.

Charles Michel, Belgium’s prime minister, said terrorists had carried out a “blind, violent and cowardly” act. Additional security measures were being rolled out across the country, he said, including “reinforced border checks and specific restrictive measures for public transport”. Belgium has been put at the highest level of terror alert.

“We are confronted by a test, a difficult test and we have to confront this test united,” Mr Michel said. “It is a black moment for our country.”

Terrorism
‘We all went to the ground’: inside the Maalbeek metro 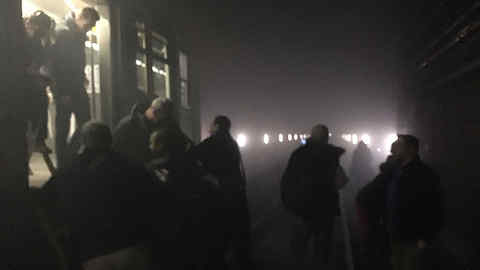 President Barack Obama said the “thoughts and prayers of the American people” were with the people of Belgium.

“We will do whatever is necessary to support our friend and ally Belgium in bringing to justice those who are responsible,” said Mr Obama, who was in Cuba. “This is yet another reminder that the world must unite, we must be together regardless of nationality or race or faith in fighting against the scourge of terrorism. We can and we will defeat those who threaten the safety and security of people all around the world.”

Jeh Johnson, the US homeland security secretary, said there was “no specific, credible intelligence of any plot to conduct similar attacks” in the US, but added that the Obama administration was “very focused on the threat posed by lone terrorist actors who might lack direct connection to a foreign terrorist organisation”.

The US military’s European Command has stopped all unofficial visits by personnel to Brussels. ​

The UN Security Council condemned the attacks and called for intensified regional and international efforts “to overcome terrorism and violent extremism”.

David Cameron, UK prime minister, was “shocked and concerned” by events in Brussels, and said Britain would “do everything we can to help”.

Get alerts on Salah Abdeslam when a new story is published