Demand is growing but some products suffer from lacklustre returns

“The business of business should not be about money,” wrote Anita Roddick, founder of ethical cosmetics company, The Body Shop. “It should be about responsibility.”

It is a creed adopted increasingly by investors. Exchange traded funds that screen for a variety of environmental, social and governance (ESG) criteria offer more opportunity for impact investment across the board, including for those seeking to boost diversity and inclusion in the workplace.

ETFs with a “gender lens” are growing in size and number, driven by women’s increasing control of wealth and investment decisions, awareness campaigns such as #MeToo and sluggish progress on inclusivity in corporate leadership.

Such an approach involves investing in gender-diverse businesses — that is, companies that include women in the founding team, leadership, management team or on the board — and backing companies that offer products or services that specifically benefit women.

The overall amount invested in such ETFs remains small but is growing rapidly. Assets in gender lens investing (including mutual funds, equality bonds, as well as ETFs) grew by 85 per cent to $2.4bn in the 12 months to June 2018, according to Veris Wealth Partners. The firm predicts gender lens investment will grow to $20bn by 2023.

“The old paradigm that you have to choose between impact and returns is simply not supported by the data,” says Ellen Remmer, a senior partner at The Philanthropic Initiative and campaigner for impact investing.

I don’t like institutions that have a singular point of view, that suffer from groupthink’

Diverse leadership has long been shown to correlate with better performance. Last year, McKinsey expanded its 2015 study to show that among 1,000 companies globally, those in the top quartile of gender diversity in executive roles were 21 per cent more likely than the bottom quartile to outperform their industry’s average earnings. A 2016 Credit Suisse report also concluded that “the higher the percentage of women in top management, the greater the excess returns for shareholders”.

However, the adage “correlation does not necessarily equal causation” applies here. No research has conclusively proven that diversity in itself causes superior performance. It could, for example, be that good corporate governance is the primary cause of higher returns, with boardroom diversity merely a concurrent outcome of the same policies.

That argument does not deter proponents, who see diversity as giving companies an edge. Barbara Byrne, a private investor and formerly vice-chairman in investment banking at Barclays, says: “I don’t like institutions that have a singular point of view, that suffer from groupthink. I believe they put their organisations at greater risk. More diverse governance should mean that better questions and challenges are being asked at the board and strategy level.”

Scrutiny of gender balance in the workplace is growing in line with women’s increased wealth and influence. Combined assets in female hands have been steadily rising: by 2020, it is predicted that women will hold $72tn, or 32 per cent, of global private wealth, according to the Boston Consulting Group.

Opinions vary as to the bar that businesses must reach to be included in gender lens investment products. Many such ETFs use internal women in leadership (WIL) tracking indices but these do not necessarily reflect more than raw numbers.

“It’s not enough to meet some base ratio,” says Ms Byrne. “I want to see women at the executive level running the business, not just supporting the business in, for example, human resources.” 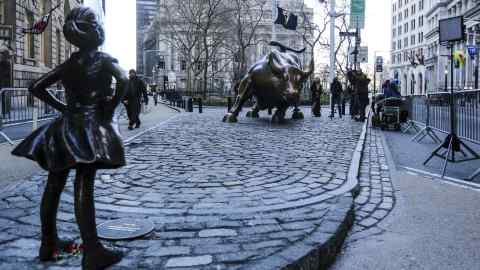 The Barclays Women in Leadership Total Return index, launched in 2014, was the first tradable benchmark that identified S&P 500 companies that had either a female chief executive or board composition that was at least 25 per cent female. This is a tougher measure than those adopted by similar products but some argue it should go further.

“Indices should look beyond board composition and to a company’s total value chain, gender pay equality, its broader relationships with suppliers and customers and the impact it makes on women,” says Suzanne Biegel, founder of Catalyst at Large, a consultancy that also campaigns on this subject.

Pax Ellevate Global Women’s Leadership Fund outperformed the MSCI World Index in the first quarter of this year, for example, but not all gender lens ETFs are star performers. State Street Global Advisors’ SHE, the largest diversity-focused ETF with about $296m under management, has marginally underperformed the S&P 500 over the three years it has been in existence.

Sue Thompson, executive vice-president at SSGA, says the lag in performance of the SHE fund is because many large technology companies, which have driven much of the growth in the S&P, are excluded from its portfolio.

The fund also came under fire earlier this year as a report by Morningstar revealed that it had only actively backed two out of 10 shareholder resolutions aimed at improving diversity. Ms Thompson says she believes in “proactive engagement with the leadership of our portfolio companies” as a more effective approach than proxy voting.

“This doesn’t need to be an either-or,” argues Ms Biegel. “An asset manager can both engage with the board behind the scenes and use its votes as a matter of public record.”

“The days when you threw your money over a brick wall and said, ‘Make as much money as you can’ have long gone,” says Ms Remmer. “Now everyone wants to know what’s beyond that wall.”