US investors barred from shares in China military-linked companies

Donald Trump keeps up pressure on Beijing despite US election loss

Demetri Sevastopulo in Washington and Colby Smith in New York

Donald Trump has signed an executive order prohibiting US investors from holding shares in companies with suspected ties to the Chinese military, in his first big foreign policy action since losing the presidential election to Joe Biden.

Shares in big Chinese telecoms groups with exposure to US investors tumbled in Hong Kong on Friday, with state-run China Telecom falling as much as 9.3 per cent and rival China Mobile dropping as much as 6.3 per cent following the order.

The measure would prevent US citizens and companies from conducting new transactions in shares of the targeted companies from January 11, nine days before Mr Biden will be inaugurated as the 46th US president. Investors who currently hold shares in the designated companies would have until November 2021 to divest them.

“The president’s action serves to protect American investors from unintentionally providing capital that goes to enhancing the capabilities of the People’s Liberation Army and People’s Republic of China intelligence services, which routinely target American citizens and businesses,” said Robert O’Brien, the US national security adviser.

The action affects more than 30 Chinese companies that the Pentagon earlier this year warned were enabling PLA military activity that posed a national security threat to the US.

The list, which was first reported by the Financial Times in June, includes several Chinese state-owned companies such as China Mobile and China Telecom, which have subsidiaries listed on US exchanges.

The certainty quotient should go up under a Biden presidency even if there is gridlock. We shouldn’t get this unusual type of dictum

The move is the latest in a series of tough actions taken by the Trump administration against Beijing in areas from cyber espionage to human rights abuses in China’s northwestern Xinjiang region. More recently, the US government has also retaliated over the imposition of a security law in Hong Kong targeting the territory’s pro-democracy movement.

Mr Trump moved against the Chinese companies by invoking the International Emergency Economic Powers Act, a powerful tool that provides the US president with wide latitude to protect national security.

One Washington-based securities lawyer said the burden would fall heaviest on big banks concerned about these kinds of risks. “They’re going to have to ban trading in those securities as of January 11 . . . This is right to the gut.”

A White House official said the order also “prohibits the purchase or investment in emerging markets funds”, which could have broader impact beyond China Mobile and China Telecom.

The Biden transition team declined to comment on the order. The incoming president will have the power to rescind it once he assumes office.

China experts in Washington had expected Mr Trump to take more assertive action against China if he lost the election, in the hope that Mr Biden would be reluctant to overturn actions that might lead to accusations he was not sufficiently tough on Beijing.

Marco Rubio, the Florida Republican who heads the Senate intelligence committee, welcomed the administration’s move, which dovetails with legislation he is pushing in Congress that would have a similar effect.

“The Chinese Communist party’s exploitation of US capital markets is a clear and ongoing risk to US economic and national security,” Mr Rubio said. “Today’s action by the Trump administration is a welcome start to protecting our markets and investors.”

Earlier this year the Trump administration took several other actions that were intended to make US investors more cautious about investing in Chinese companies.

Ed Al-Hussainy, a currencies and rates analyst at Columbia Threadneedle, said investors had been “very aware that some of these names are just vulnerable to this risk”, referring to the companies on the Pentagon list. 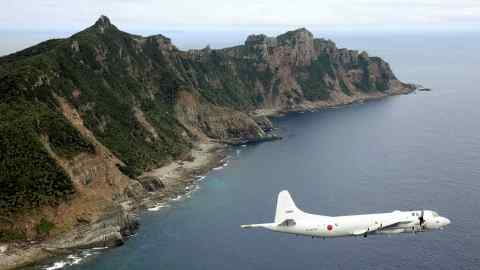 What was less certain was how the order would be put into action, he added. “It is not clear what the implementation is going to be.”

Kathy Bostjancic, chief US financial economist at Oxford Economics, said markets had presumed that the Trump administration’s hostility would come to an end with the White House transition in January.

“The certainty quotient should go up under a Biden presidency even if there is gridlock,” she added. “We shouldn’t get this unusual type of dictum.”

Shares in Chinese companies fell during US hours after the list was reported late in the trading day, shaving 0.8 per cent off of an earlier gain in the popular iShares MSCI China exchange traded fund. The ETF ended the day only marginally higher.