Emmanuel Macron’s government faced two votes of no confidence on Tuesday over its handling of a scandal that erupted after a presidential aide was caught on camera beating May Day protesters.

The government easily survived the votes, which were being held on the eve of a parliamentary recess. But the symbolic move by the opposition capped a tumultuous two weeks for the French president.

The no-confidence motions were separately put forward by leftwing parties, including Jean-Luc Mélenchon’s Unbowed France, and the rightwing Republicans. The moves underline how the bodyguard affair has emboldened established parties that were left in disarray after Mr Macron’s election victory last year, but could now threaten the president’s planned constitutional reform.

“We are witnessing a sort of parliamentary revolt,” said Luc Rouban, a political scientist at Cevipof research institute. “In essence, the old world is saying: ‘We exist and we are not just puppets, there isn’t just an all mighty executive power’. It will make things much more complicated for Macron going forward.”

The French president has for two weeks grappled with the fallout of revelations that Alexandre Benalla, a trusted Elysée aide, impersonated a police officer and punched protesters during the May Day protests.

The scandal sparked outrage among opposition parties after it emerged that the Elysée had been aware of the allegations soon after the demonstrations but chose not to report them to judicial authorities. Instead, the president’s office imposed a light sanction on Mr Benalla, who was Mr and Mrs Macron’s private bodyguard during the presidential election campaign.

Analysts say it is too early to measure the impact of the controversy on Mr Macron’s approval ratings, which have dipped below 40 per cent in recent weeks. But it has already caused the postponement of parliamentary debates about plans to reduce the number of MPs by as much as a third in the lower and upper houses of parliament. The opposition says the reform, part of Mr Macron’s plans to overhaul France’s postwar institutions, would only reinforce the power of the president.

French politics
Macron, the bodyguard and the May Day scandal 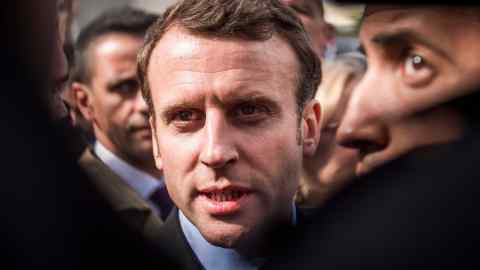 The Benalla row has also put a spotlight on dysfunction in one of the most centralised presidencies in the history of the fifth Republic, backed by novice MPs elected under the banner of Mr Macron’s La République en Marche party, Mr Rouban said.

The unprecedented political dynamics have helped the president swiftly pass economic reforms in the first year of his term but it has also weakened France’s constitutional checks and balances, Mr Rouban added.

“There’s a growing sense that the institutions are being twisted, that the balance of power tilts too much in favour of the Elysée,” he said.

At the weekend, Mr Macron dismissed the scandal as “a storm in a teacup”, a few days after he defiantly called on his critics to “come and get me”.