Devotees of crime writing have a busy — if somewhat gory — summer ahead.

There is a growing number of British literary festivals devoted to crime writing and detective fiction, each hosting acclaimed international writers to entertain audiences while they delve into the finer points of their craft.

Harrogate’s Theakston Old Peculier Crime Writing Festival, held in July in the Victorian grandeur of the Old Swan Hotel, is one of the biggest. In September, there is Bloody Scotland held in the medieval city of Stirling, with its spectacular castle, and various other venues, plus Norwich’s Noirwich festival.

And in London, the British Library is putting on Bodies from the Library, its annual one-day conference on Golden Age detective fiction, later this month.

Enjoyable as these are, many fans feel the urge to move beyond a seat in the audience and pit their own wits against a devious criminal. So if you fancy yourself as Miss Marple or Lord Peter Wimsey, or even the faithful Inspector Japp, an experience to test the crime detecting powers of your own “little grey cells” can now be had — a murder mystery in a real country house.

There’s something about the tradition of British crime fiction that lends itself to such experience events. If the fictional crime statistics reflected reality, sleepy villages of the deep English countryside, magnificent looming castles of Scotland and grand houses right across the land would clock up a murder rate about 10 times that of the mean ‘hoods of Baltimore.

Perhaps it is the sheer number of evocative historic buildings across these islands that moulded its particular genre of Anglo-noir: essentially non-urban and far from the grim streets of the police procedural, often based in remote countryside or ancient dwellings, drawn from the darkness that lies beneath the apparent gentility of the British or from the deep-buried tension of supposedly settled places.

Ann Cleeves, acclaimed for her mystery stories set in the Shetlands — now an award-winning television series — explains why the setting is so significant.

“It has everything a crime writer needs for plots — spectacular scenery, enclosed communities, generational secrets stretching back years,” she says. And Sara Sheridan, the creator of 1950s detective Mirabelle Bevan, describes being inspired for her dark storylines by “a whisper from history”.

Generational secrets and whispers from history fuel the country house murder plots, too — and where better to sample them than at dinner?

A wide range of companies now offer murder mystery experience dinners, overnight stays or full weekends in luxurious period houses and other locations oozing atmosphere. At their simplest, the mystery challenge might be a set of clues to solve; sometimes a re-enactment could set out the puzzle; while the more elaborate experiences can involve professional actors who mingle with the guests and form part of the unfolding crime story, never breaking character.

One such scenario is provided by Virgin Experience Days, in a range of promising locations across southern England.

Arts books
The literary festivals to read up on in 2018 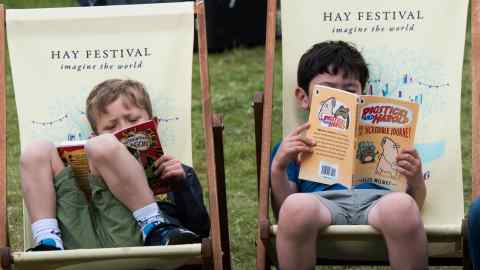 Another specialist company, called It’s Murder (slogan: “we’re dead good”) stages murder mystery events in period hotels in Shropshire, Yorkshire (including the ravishing Cave Castle) and elsewhere. There’s even one on a P&O Ferry cruise from Hull to Bruges. The company loves a corny pun, and their themed mysteries include Fowl Play (with a celebrity chef), They Sphinx it’s All Over (archaeology, anyone?), and Who Wants to Die a Millionaire.

Cluedunnit is another company creating murder mystery (and mayhem, it promises), sometimes using teams of professional actors. It is old-school, devoted to Agatha Christie and her era, and with that in mind one of their regular locations is the beautifully restored Art Deco hotel on Burgh Island, Devon. Once the hang-out of the likes of Noël Coward, it looks just like something from the set of Poirot.

With Cluedunnit, enthusiasts can go one step further and host their own bespoke mystery experience, with their own guests as participants and suspects (perhaps even murderers). A killer idea for a significant birthday party, perhaps.