Lead the way with 50% off
Full throttle – a motoring special for summer 2021
See all 9 stories
How To Spend It Cars, bikes, planes and boats

Sign up to myFT Daily Digest to be the first to know about Cars, bikes, planes and boats news.

A good foot long and topped with a tactile aluminium sphere, the gear lever wouldn’t look out of place on a one-arm bandit. And the first couple of times I haul it back to shift from third to fourth, I catch Elliot East nervously glancing at the beautifully sculpted turret that surrounds it.

He’s stopped looking after half-a-dozen upshifts, not exactly confident but perhaps feeling slightly easier about my ability. And who could blame him for being a bit on edge? East has put three years of his life into building this car, and after knowing me for five minutes he’s allowed me the once-in-a-lifetime opportunity to find out what it’s like to drive a 330 LMB, the enigmatic Ferrari that competed in the 1963 Le Mans 24 Hours. With just four made, the 330 LMB is almost 10 times rarer than the marque’s 250 GTO, examples of which have fetched close to $50m at auction.

Classic competition Ferraris are notoriously demanding to drive, with heavy controls, deafeningly noisy interiors and engines that champ at the bit at low speeds – but not this one. Yes, the throttle is a little heavy on account of having to feed six hungry carburettors; the space between it and the brake pedal is clearly intended for the foot of a diminutive racer; and you do need to think a bit while changing gear.

Otherwise, driving the 330 LMB (which stands for Le Mans Berlinetta) is a pure joy. Its four-litre V12 provides visceral thrills, both from a soundtrack that gets more mellifluous as the revs rise and from the way it causes the car to reel in the horizon, thanks to nearly 400 horsepower propelling a mere 1,200 kilos. It’s even unfeasibly comfortable in there, with all-enveloping bucket seats, plenty of leg room and enough quilted leather and lightweight carpet to make this particular 330 LMB feel more tourer than racer.

Indeed, that was part of the brief when the Hertfordshire-based collector, car restorer and Ferrari specialist Bell Sport & Classic set out to finish a project started more than a decade ago by the late Ed Carter, a Ferrari-mad Essex farmer whose dream was to build a recreation of the virtually unobtainable 330 LMB based on a 330 GT 2+2 donor car.

But having had the chassis correctly modified and most of the bodywork made by leading coachbuilder RS Panels – which involved a trip to New York to create templates from one of the four original cars – Carter was involved in a fatal accident in 2015 while driving his prewar Bentley.

In 2017 the car was acquired by the owner of Bell Sport & Classic, who tasked his team with finishing it to an unimpeachable standard. In the name of authenticity, unobtainable parts were made from scratch, ranging from the fuel filler cap to the window catches and from key engine components to the aforementioned gearbox turret. As a result, it’s fair to say that the car is better than the four original 330 LMBs ever were when they were built to contest at Le Mans in 1963.

The one thing missing from the Bell Sport & Classic version, however, is a price tag. Managing director Tim Kearns says the car is there to demonstrate the level of attention to detail that remains consistent throughout its restorations, be they on similarly rare or more ubiquitous Ferrari models. But even without the showcase 330, the firm has already established a reputation for being among the best specialists in the business.

On the day of my visit alone, the multimillion-pound line-up of classic Ferraris awaiting meticulous, ground-up rebuilds included a rare Dino L-series (one of the very first made, and the actual car displayed at the 1969 Frankfurt Motor Show); a 1966 example of the elegant 330 GTC coupé that had recently returned from having its old paint removed by walnut blasting (gentler, says Kearns, than conventional shot blasting and better for preserving “vital originality”) and a 1965 275 GTB short nose that, to my amateur eye, seemed to be in perfectly good shape. 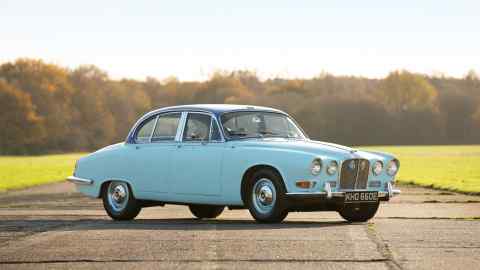 “If you look more closely you’ll see that it has just been tidied up at various stages in the past,” says Kearns. “But it’s an important and valuable car that has been in the UK from new – we’ll strip it right down, scan it and then begin a process of preservation and restoration that will take around 18 months to complete, after which it will be in exquisite, concours condition.”