Walgreens buyout would be a test of bond investors’ appetite

KKR’s proposal to acquire Walgreens Boots Alliance sets up a test for debt markets, where a tide of cash has sent borrowing costs lower but investors have worried about risky deals.

The listed pharmacy group carries about $15bn in net debt, accounting for about one-fifth of its enterprise value.

But a private equity-backed takeover would typically entail borrowing far more: when KKR bought Alliance Boots in 2007, the firm leaned on credit markets for as much as 80 per cent of the £11.1bn acquisition price.

Raising enough debt to fund a similar leveraged buyout of the $70bn Walgreens business presents a challenge that “would be overwhelming”, said David Norris, head of US credit at TwentyFour Asset Management.

Much would depend on whether Walgreens could retain an investment-grade rating for at least part of the debt, gaining access to the $8tn investment-grade bond market, which some analysts believe is essential for capital-raising on this scale.

Walgreens’ bonds are rated BBB or equivalent by major rating agencies, which have yet to respond to news of a potential deal. Moody’s in August held its rating, noting that “operating performance has been weak but fundamentals remain strong”.

News of a potential takeover hit Walgreens’ bonds, with a 10-year note falling 2 cents on Friday ahead of the Veterans Day market holiday to trade at 101 cents on the dollar.

That is slightly above the bond’s original sale value, and close to the value at which Walgreens would have to buy back the bonds in the event of a change of control, according to Covenant Review, a credit research group.

Investment-grade corporate credit has been one of the most sought-after investments in recent years, but the surge of interest has raised questions over whether risks are building in the market.

The premium demanded by investors over super-safe US Treasury bonds has fallen from 1.6 per cent in January to 1.1 per cent currently, according to data from Bloomberg.

The junk bond market is much smaller than that for investment-grade debt, however, and some investors doubt it could support a Walgreens acquisition.

A $50bn capital raising would represent about 5 per cent of the value of all outstanding junk bonds. While Verizon, Anheuser-Busch InBev and CVS have all issued investment-grade bonds worth $40bn or above, the biggest high-yield bond financing ever was far smaller: completed by French company Numericable Group in 2014, it was for just shy of $11bn, according to Dealogic data.

“With the current state of the high-yield bond market it’s a big nut to digest,” said Mr Norris of a Walgreens deal. “They will have to come up with some innovative financing.” 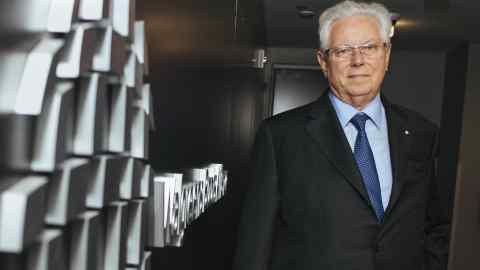 Maintaining the investment-grade rating would be a rare feat for a private equity-backed firm, but there is at least one apparent precedent in Dell’s $63bn purchase of computer storage company EMC in 2016. By pledging assets as security, the junk-rated group was able to raise some of the money through a $20bn investment-grade bond.

Still, some market participants believe KKR has struck at a moment when junk bond investors are so hungry for yield they may be willing to bite into what would be the biggest private equity deal on record — so long as investor protections are adequate and the credit rating is towards the top end of junk territory.

Borrowing costs for the highest rung of the junk bond ladder, rated double-B, hit a six-year low of 3.96 per cent at the end of October on strong investor demand, even as lower-rated, triple-C bonds have risen to trade above 12 per cent from a low earlier in the year of 10.5 per cent.

“It’s a little surprising we haven’t seen more mega LBOs,” said a high-yield bond trader. “This is certainly untested but there is demand in the market. I would not be surprised if it goes through.”