Patriarch returns to company, with fate of UK steel plant in question again

Tata Group, India’s biggest conglomerate, has removed chairman Cyrus Mistry after a “clash of cultures” saw him lose the backing of Ratan Tata, his predecessor and patriarch of the founding family.

In a statement that sent shockwaves through India’s business circles, the company also said the board was reinstating former chairman Mr Tata as interim chairman. 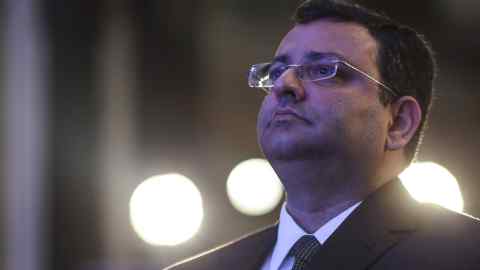 It said it had already established a committee to identify a long-term successor for Mr Mistry, a process it said would be completed within the next four months. The statement gave no explanation for the removal of Mr Mistry, whose family controls 18 per cent of Tata Sons, the conglomerate’s holding company.

Lord Kumar Bhattacharyya, the UK-based industrialist and a member of the committee set up to find a replacement for Mr Mistry, told the FT the chairman had been replaced as a result of a “lack of performance”.

In the past four years, some investors had grown frustrated with Mr Mistry, whom they accused of ducking tough decisions needed to overhaul the sprawling group.

Cyrus Pallonji Mistry, 48, was the first non-Tata family member to serve as chairman of Tata Sons, although his sister was married to former chairman Ratan Tata’s half brother.

Mr Mistry was born into India’s tight-knit Parsi community, the second son of construction magnate Pallonji Mistry, whose own father purchased shares in Tata Sons in the 1930s. Pallonji Mistry’s present stake in Tata Sons is 18 per cent, making him the largest individual shareholder of the group, which is mainly owned by charitable trusts.

Cyrus Mistry studied engineering at Imperial College in London, and later attended the London Business School. He then returned to India to work in his father’s company, rising to become its managing director, and helping to grow the business in the Middle East.

He joined the board of Tata Sons in 2006, taking over the seat vacated by his father. But some commentators were surprised by the low-profile, media shy businessman’s elevation to the chairmanship of the Tata Sons in 2012.

One person said that Mr Tata had become concerned about an erosion of the conglomerate’s ethical culture and long-term principles under his successor, and that their relations had reached breaking point.

Mr Mistry created a five-person “group executive council” that was younger than the top team during Mr Tata’s tenure, and was seen by some in Mumbai’s business community as lacking the previous team’s expertise.

“The board, on the recommendation of the principal shareholders, decided it was time to consider a change,” said another person close to the group, who confirmed that this was a reference to the Tata Trusts — charitable bodies controlling 66 per cent of Tata Sons’ stock, which are chaired by Mr Tata.

Tata Sons in turn exercises control over the group through large stakes in businesses such as Tata Consultancy Services, Tata Motors and Tata Steel.

The transition may also mean the company is more prepared to invest “whatever it takes” in its Port Talbot steel works in the UK, as well as in carmaker Jaguar Land Rover in the UK, according to one person familiar with the Tatas’ thinking.

“It’s stunning to see a figure of this stature exiting so abruptly,” said Saurabh Mukherjea, head of institutional equities at Ambit Capital. “There is no precedent in Indian corporate life.”

Mr Mistry was only Tata’s sixth chairman since its foundation in 1868, and the first not to be related by blood to its founder Jamshetji Tata — although he is connected to the family through his sister’s marriage.

Moreover, his family has been a major investor in Tata Sons since the 1930s, and its Shapoorji Pallonji Group is currently the biggest shareholder after the Tata Trusts, with a stake of 18 per cent.

Port Talbot ‘virtually safe’ after change at the top

After being unable to find a buyer for the site earlier this year, Tata had entered into talks with German rival ThyssenKrupp over a European merger of their steel businesses, setting up a possible exit from steelmaking in Europe — a policy some claimed was favoured by Tata’s chairman, Cyrus Mistry.

But, according to one person familiar with the company’s thinking, Tata now believes its UK steel business has a future, and is considering investing up to £2bn in the site.

“They are now prepared to keep Port Talbot and to invest whatever it takes to make it efficient,” the person said following news that Tata had sacked Mr Mistry. Port Talbot was “virtually safe” after the change at the top of the company, the person added, “with or without ThyssenKrupp”.

Tata Steel put its ailing UK arm up for sale in March after losses widened to £1m a day, plunging the future of the UK industry into doubt.

But, after weeks of talks with buyers, unions and the UK government, the Indian group changed course shortly after the EU referendum, announcing it was in talks with German rival ThyssenKrupp over a European merger.

Recently, the Port Talbot plant’s finances have been helped by a recovery in the steel price, the fall in sterling and an efficiency drive aimed at cutting costs.

But it still requires heavy investment to safeguard its future, according to several people familiar with the site.

Get alerts on Ratan Tata when a new story is published