Labour struggles to be heard in EU battle

Tory infighting is drowning others out, deputy leader warns

Millions of Labour voters do not know if it is In or Out on EU membership because its message has been drowned out by the “psychodrama” between Tory cabinet ministers, the party’s deputy leader has claimed.

Tom Watson said the headlines had been dominated for months by the “blue-on-blue” warfare between Boris Johnson, David Cameron, Michael Gove and George Osborne.

“We’re hoping to wedge some space into this campaign so we can talk about Labour’s message,” he said. “The pollsters say about 40 per cent of Labour supporters don’t know our position. That’s frustrating.”

Mr Watson’s claim is supported by a study from Loughborough University, which found the party was the wallflower of the referendum campaign. Labour voices were present in less than 4 per cent of TV coverage and 8 per cent of print coverage. Not one Labour politician appeared in the top 10 most frequently reported individuals ahead of the vote on June 23, it found.

But Labour — despite losing the general election last summer — still picked up 9m votes, giving it huge potential clout. “With many believing it will be the Labour voters who ultimately decide the vote on the 23rd, their party’s lack of visibility across press and television will be a major concern,” said James Stanyer, co-author of the report.

The Remain camp, increasingly aware of the problem, silenced its most senior Tory figures on Friday to try to create a “Labour day” where the opposition party might be heard.

In part, the lack of media interest reflects the unity of views within the party: out of 232 MPs only 10 have joined the Out campaign. But Labour’s problems can also be summarised in two words: “Corbyn” and “immigration”.

Jeremy Corbyn, the party leader, did not attend Friday’s press conference, where senior party figures released a dossier warning that big tax rises and public spending cuts would be needed to repair the fiscal damage of Brexit. Mr Corbyn, a life-long republican, was absent because he was at the Queen’s birthday party. His closest ally, shadow chancellor John McDonnell, was also elsewhere, with allies briefing that he would rather make his own, more “positive” contribution, next week.

Some MPs have raised doubts about Mr Corbyn’s claims to want to stay in the EU, given that he used to espouse a Tony Benn-esque Euroscepticism.

Last week Mr Corbyn was accused by colleagues of “sabotage” after criticising the Treasury’s supposed scaremongering about the damaging impact of an Out vote.

Even his speeches ostensibly backing the EU — in particular its support for the environment and workers’ rights — are laced with heavy criticism of what he sees as an undemocratic edifice serving the interests of predatory capitalists.

John Longworth, who was forced out as head of the British Chambers of Commerce after making a Eurosceptic speech in March, claimed on Friday that he had been congratulated by Mr Corbyn as he came off the stage that day.

John Mann, one of the handful of Eurosceptic Labour MPs, noted on Friday that his leader had been “equivocal” on the issue of Europe. Labour’s support collapsed in Scotland after it worked with the Tories in the Better Together unionist campaign. Mr Corbyn’s allies do not want to repeat the mistake.

As a result, the Labour leadership has used the referendum as an opportunity to attack the Conservatives: thus the repeated use of the phrase “Tory Brexit” to describe the consequences of an Out vote.

Meanwhile, Labour’s dilemma over the EU also boils down to the question of what to do about immigration. 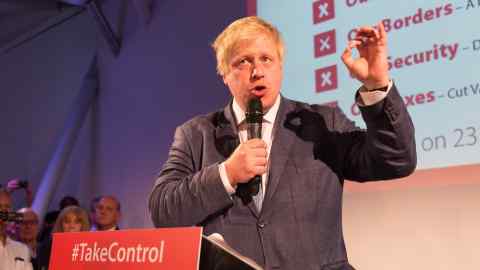 Huge numbers of its blue-collar, working class voters cite the issue as the one overriding reason why they will vote Out on June 23: some are increasingly drawn to the UK Independence party.

One member of the shadow cabinet said it had been hard to get local activists to campaign for Remain as many did not want to “pick fights” with Labour voters over immigration. On Friday it emerged that immigration was not mentioned anywhere on one Labour Remain leaflet.

Keir Starmer, the shadow Home Office minister, said there was a growing perception among Labour voters that the party had “walked round a problem, rather than confronted a problem”.

Andy Burnham, shadow home secretary, angered some colleagues after suggesting that Remain faced the “very real prospect” of defeat as it was struggling to reach traditional voters with concerns over issues including immigration.

“We have definitely been far too much Hampstead and not enough Hull in recent times and we need to change that,” he said.

One Labour figure said his own colleagues were “furious” with Mr Burnham. “He needs to learn he’s a politician, not a commentator.”