Life on the edge: five days in the Faroes

You soon learn in the Faroes not to anticipate an itinerary. Barely an hour after landing at Vágar airport I find myself in a lonely dockside lock-up, impaling a sea urchin with two lethal-looking carving knives. It’s not quite what I had envisaged for my dinner; its tiny spines are still performing a slow, shifting dance as I scoop out its livid coral and slurp it with its salty jus.

A baptism to the Faroes’ culinary bounty, the evening is being hosted by Marni Gunnar Simonsen – “a woman’s name”, he says ruefully. An avuncular, chain-smoking seafood exporter who supplies the world’s best restaurants (until recently, he kept Putin in crustacea), he also officiates small, exclusive dining parties to selected people or any visitors able to track him down.

“Are you open and curious?” he demands as I step into his makeshift kitchen; a saucepan of boiling water is the only harbinger of what’s to come. He then insists my husband garotte a champagne bottle with a sabre before handing us a writhing langoustine to plunge into the pan.

The Faroe Islands are not a destination for the faint-hearted. Nor would I recommend them to sun-seekers. Or people who like trees. Fish fans, on the other hand, will love them. Some 90 per cent of the islands’ $3.13bn GDP is built on fish farming, which is the dominant industry on the isles. You’ll also love them if you’re Christian: around 90 per cent of the islands’ 54,000-strong population are believers, with 85 per cent being members of the Lutheran Church. They’re also great for rhubarb lovers – the Faroes’ most common crop. With the exception of a few homegrown potatoes, all their other vegetables are delivered from Denmark. On the Faroes, you can have langoustines for breakfast but a good tomato is a rare, luxurious thing. Everything about the Faroe Islands is extreme and slightly bonkers. The archipelago sits 200 miles north-west of the Shetland Islands, a tiny outpost in the north Atlantic. It was used as a military base by the British during the second world war, which might account for the region’s strange obsession with tea and Viscount biscuits, but the Faroes are a part of Denmark, albeit self-governing since 1948.

I have come to the Faroes out of curiosity. I’m fascinated to know what it’s like to live in a climate so unforgiving that the temperature rarely exceeds 15 degrees. I want to see the jagged landscape and walk on cliffs, some of the highest in Europe, that rise around 750m above the sea. Actually, I don’t have the stomach to manage anything so daring. The cliffs I edge are only 350m tall. But lying on one’s belly while peering over is still completely overwhelming; it’s hard not to be gripped by the brutal majesty of it all.

And the Faroes are brutal. Red in tooth and claw. In May, locals congregated on Sandágerði beach to take part in a traditional grindadráp, or whale hunt, in which around 60 pilot whales were slaughtered and then divided among the community. In a country in which food has always been hard to come by, whale meat was once key to survival, but it’s hard to believe the Faroese are still eating the same volume of whale they slaughter to this day. Nonetheless, the grindadráp is a feature of the island culture, along with grass-roofed houses and pretty knitwear and chain dancing in national dress. To understand the Faroes is to accept traditions that are hard-baked into the psyche, and which remain fiercely guarded – if not entirely in keeping with the times.

Over a home-cooked meal of mostly cod, shark steaks and seaweed, Gutti Winther, a chef and television personality, explains the provenance and, he says, variety to be found in Faroe foods. Although the islanders eschewed shellfish for many centuries, gull eggs and puffins were once staples; the Faroes are also home to skerpikjøt, a dried and preserved sheep’s leg that has been exposed to the salt-rich winds. Providing for the winter was once such an essential feature of survival, says Winther, that many Faroese still plot the best place for their drying huts, or hjallur, before considering where to build their homes.

That the Faroes have become the focus of a burgeoning food culture is largely thanks to Johannes Jensen, the entrepreneur behind the first Michelin-starred restaurant in the Faroes, a further 12 restaurants in the region and three hotels. Koks, which offers a 17-course tasting menu to only 30 covers, opened in 2011, and was awarded its second Michelin star in 2019. But things have gone south with the authorities regarding the restaurant’s planning permissions, and so in protest Koks has decamped to Greenland for 2022. Even without its fabled restaurant, the food scene in the capital of Tórshavn is still well worth a taste. Visitors can enjoy fine culinary innovations over a four- or seven-course meal at Roks fish restaurant, eat slow-cooked lamb at the more traditional but equally charming Áarstova, its neighbour, or head up the road for a delicious open sandwich at Bitin.

Unlike Iceland, which has at least 20 years on its neighbours, the Faroese have only really embraced tourists in the past decade. Theirs has been a cautious undertaking – there is much chat about sustainable growth – and with visitor numbers being so seasonally dependent, new restaurants and artisanal craft shops must engage the local community as well. While Instagram and geotagging have done much to open up the islands’ vistas, the Faroese are wary of having busloads of visitors trampling over what is often private land. Likewise, they view the new tunnels that have connected the island’s more elusive outposts with a mixture of scepticism (“Was this the best use of our tax dollars? To connect 11 people on an island?” asks Winther), underscored with awe and national pride.

If I were in charge of the tourist office here, I would make more fuss about the epic confectionery choice

And the Faroes deserve tourists. Where else could claim to have killed James Bond? The secret agent met his fate on Kalsoy, a jagged and largely uninhabitable island otherwise famed for the myth of the seal woman, or selkie (of whom there is a statue in the tiny village of Mikladalur), and a lighthouse which decorates a picturesque if precipitous cliff edge on the far end of Kalsoy.

According to our chaperone, Árni Winther Jákupsson, a cherubic 21-year-old from Tórshavn whose enthusiasm for the Faroes is more vivid than his richly detailed knits, the Bond crew spent many weeks on Kalsoy waiting for the right weather conditions before shooting, and then only used a few seconds’ worth of film. Nevertheless, the islanders are justly proud of the association, and recently erected a headstone in Bond’s name. “In memory of James Bond,” reads the inscription. “The proper function of man is to live not to exist.”

On the day that we visit, the view is blocked by mist and fog. A fierce wind whips round the lighthouse, and any photo ops are soon called off. It’s a little disappointing, considering this is the Faroes’ only major claim to cultural fame, but instead of becoming too disheartened Árni unveils a spread of snacks. The sheer range of biscuits and sweets on offer on the Faroes is mind-blowing, a perfect confluence of Icelandic, Danish and British tastes. If I were in charge of the tourist office, I would make far more fuss about the epic confectionery choice. 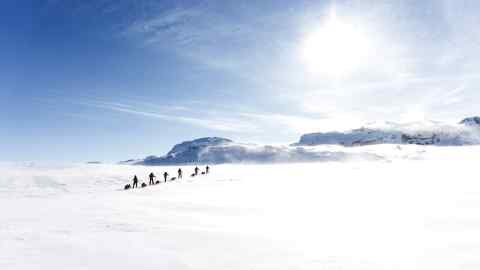 To really get the Faroes, however, you need to venture out to sea. It is here, buffeted by the unforgiving waters, that the true meaning of what it takes to live here finally takes shape. Until the tunnels and the helicopters, the waters governed every aspect of Faroe life. Islands could be cut off for weeks from outside contact; many “harbours” are simply jumping-off points, and one could spend one’s life waiting for a ferry just to buy a loaf of bread. On a vintage wooden schooner we sail to Hestur (horse island) to look at cliffs and caves. Even with three thermal layers, a sweater, a down coat and a gigantic fishing onesie, the wind still cuts through to the bone. Bobbing around Klæmintsgjógv grotto, a local musician plays a medley of folk/jazz compositions in a performance as idiosyncratic and bewildering as the Faroes are themselves. In the boat’s torchlight I see figures appearing in the rock face, and understand why these lands are dense with myth. Like the one about the “slave cliff”, a popular landmark near the airport, where, legend has it, the island’s old folk once came to die. It sounds a bit theatrical – surely if you were that infirm you’d never manage to walk the pathway – but Árni cheerfully reassures me that in the old days, it was not unusual for older members of the community to vanish up the mountains in order to self-euthanise.

Maybe it’s something about the lack of woodland, but there are no hiding places here. Everyone knows everything about your business. And no secret’s safe for long. According to Randi Á Bergi, a flaxen-haired student tour guide who has returned from university in Hawaii to spend a summer working at home, physical affection is frowned upon, and not even friends would offer you a hug. The Faroes are short on gestures of affection; this is no place for high romance. “There’s no dating,” she says of local courtships. “If you like someone you either go for tea at one another’s houses, or you go out for a drive.”

It sounds a bit limiting as a lifestyle, and that’s before the winter all but extinguishes the light. But the Faroese seem pretty happy with their islands; there’s a collective optimism in the knowledge that you can’t predict what happens next. “We call it the island of maybe,” says Árni, “because you just don’t know what the weather will bring.” Every plan has to be made with the understanding it might get cancelled. Every outing requires a back-up plan.

And then, on the last day, a heatwave: the wind stops blowing and the temperature hits a balmy 13 degrees. So rare are the conditions that the schools close to allow the kids to soak up sunshine and people are encouraged to knock off work. On a boat trip back to Hestur, I watch thousands of puffins and other seabirds nestling in the cliffs as I feel my face burn in the full sun. The air smells of a superlative kind of freshness, like pure oxygen: the light is something else.

After dinner, back in Tórshavn, Árni suggests a drive to watch the setting sun. He thinks we might get to see pollamjørki, a meteorological phenomenon where the evening mist sits underneath the mountains to create a kaleidoscopic sky. Maybe we’ll be lucky. And maybe we won’t. We charge up to the summit as the minutes tick to midnight and watch the islands now suspended in an otherworldly light. I watch the Faroese teenagers taking selfies and getting high on golden hour. They don’t get these moments often, but growing up amid such strange unearthly beauty must haunt your entire life.

Jo Ellison travelled as a guest of Pelorus. Five-night Faroe Islands Discovery from £7,500 per person, based on four travelling, not including international flights.