Sign up to myFT Daily Digest to be the first to know about Asia-Pacific news.

South Korea’s presidential office on Wednesday announced a high-level government shake-up as it seeks to defuse an unfolding political crisis that threatens the leadership of Park Geun-hye.

Amid an outpouring of public anger over allegations of influence-peddling and corruption, the Blue House named a new prime minister, as well as a finance minister and a security minister.

The reshuffle comes as Ms Park faces withering criticism and daily protests over claims that Choi Soon-sil, a longtime friend of the president, exerted influence over an array of presidential decisions. Ms Choi is alleged to have used her position to press top companies into donating millions of dollars to foundations under her control.

The saga has dominated headlines and caused Ms Park’s approval rating to fall to record lows.

As part of the reshuffle, Kim Byong-joon, a veteran political aide, will take over the mostly administrative position of prime minister from Hwang Kyo-ahn, while Yim Jong-yong, a former chairman of the Financial Services Commission, inherits the finance portfolio from Yoo Il-ho.

The moves have already been criticised for not going far enough. Many in the east Asian nation believe Ms Park should resign. 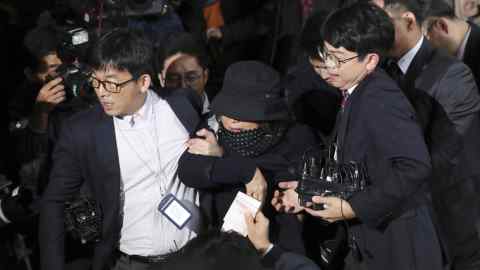 “There can be no way to resolve the situation other than her own resignation,” said Suh Bok-kyung, a politics researcher at Sogang University in Seoul. “The cabinet shake-up shows that she is still sticking to her own way, regardless of whatever others say. It sends the signal that ‘I am not at the heart of the problem’ . . . This will likely make matters worse.”

Ms Choi was detained by prosecutors on Tuesday a week after local media revealed she had been privy to presidential decision-making and had been given first drafts of important policy speeches and budget proposals.

Allegations that she pressed some of the country’s biggest corporations into donating tens of millions of dollars are also the subject of intense scrutiny.

Local media on Wednesday reported that prosecutors are probing a €2.8m transfer from Samsung Electronics to Widec Sports, an entity set up by Ms Choi and her daughter, Jeong Yu-ra, in Germany.

Ostensibly, the money was to support the development of equestrian activities ahead of the Tokyo 2020 Olympics, although the bulk of the funds were spent on a horse then used by Ms Jeong for training, Yonhap news agency reported.

Samsung declined to comment on the claims on Wednesday but said it would fully co-operate with the investigation.

Two of South Korea’s other biggest conglomerates — Lotte and SK — are also reportedly being investigated.

Lotte told the Financial Times on Wednesday that it had provided funds to one of the foundations in question, although it added that the money had since been returned and it denied any knowledge of Ms Choi or her involvement. SK declined to comment.

Ms Park attempted to head off the furore last week with a rare televised apology. Yet thousands took to the streets over the weekend to call for the president’s resignation, amid renewed concerns about transparency and corruption at the country’s highest levels.

“People will not accept whatever she does from now on because she has already lost her credibility,” said Shin Yul, a politics professor at Myongji University.